Given the downer characteristics of some of my recent posts, I decided to go rainbow this time: Peter took the photo shown above from our balcony a few days ago. As we stood looking together at the late-afternoon cityscape, my heart lifted skyward. Both of us were struck with awe while the doubled ancient sign of good-things-to-come slowly faded and blinked out. For some weeks before this heavenly herald underscored it, our lives had, indeed, been trending toward an easier happiness—albeit the earthy version, the kind that, in Jane Kenyon‘s eponymous poem,

…comes to the monk in his cell.
It comes to the woman sweeping the street
with a birch broom, to the child
whose mother has passed out from drink.
It comes to the lover, to the dog chewing
a sock, to the pusher, to the basketmaker,
and to the clerk stacking cans of carrots
in the night.
It even comes to the boulder
in the perpetual shade of pine barrens,
to rain falling on the open sea,
to the wineglass, weary of holding wine.
My 2021 everyday wonders have come in all colors of the rainbow:
red: the good use Peter and I have made of the bubbling, self-heating, knobbly-bottom (for self-massage) foot bath he gave me for Christmas by giving each other pedicures 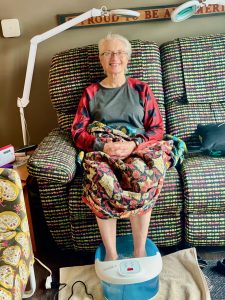 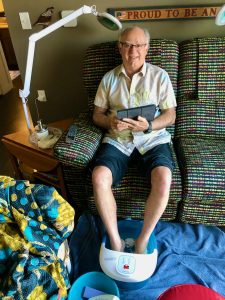 orange: our grandchildren’s (albeit socially distanced) presence in our lives: Dante 8, Aliya six weeks shy of 12, and Kanye 13 ¾ 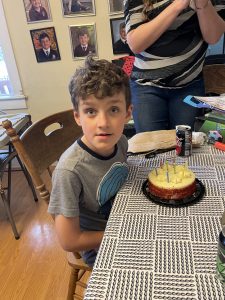 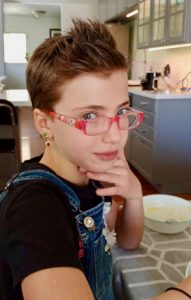 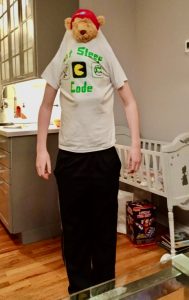 yellow: celebrating Peter’s 73rd  birthday with a dinner à deux featuring meat pie that I still remember how to make from his mother’s recipe, together with one of the fabulous salads that he makes us for dinner every night 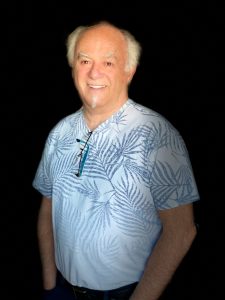 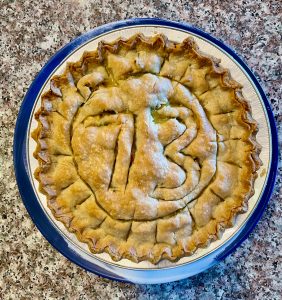 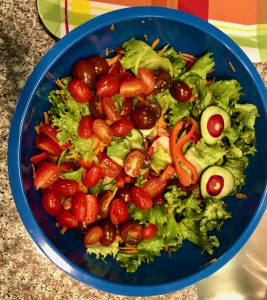 green: the two new and two old granddogs in our family: 1-2 yr old Binx that Adam’s mom, Sandi, adopted from the shelter so that each of them no longer lives alone; Marissa, Adam, and Dante’s (MAD’s) new puppy, Kronos; Callisto, MAD’s dog that is older than Peter and me in dog years; and Newton, Cheryl, Kanye, and Aliya’s (CKAN’s) Smudgie, almost as old as Callisto. (The last two photos are both of Smudgie, one with each grandchild) 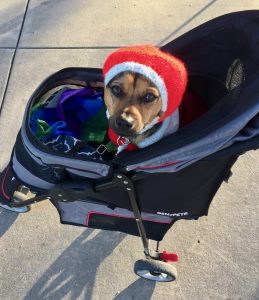 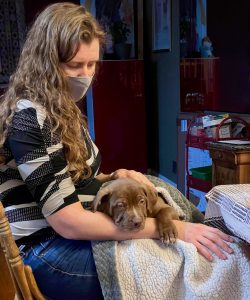 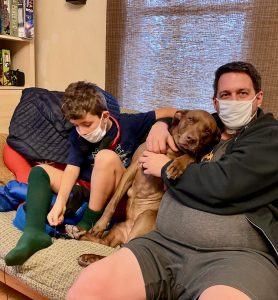 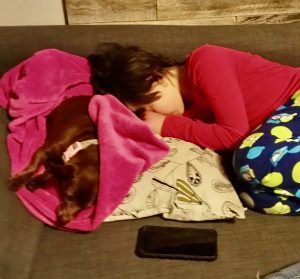 blue: My new joy in reading, combined with the graciousness of my friends Kirstin and Shen who, per my nervous recommendation, tackled the first volume of Marcel Proust’s famously daunting seven-volume, 4000+ page novel, In Search of Lost Time, so we could discuss it (below, me studying, surrounded with all things Proust.) 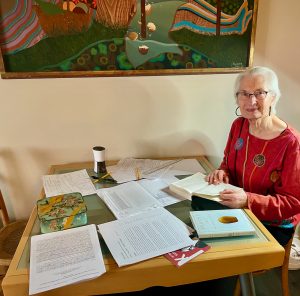 violet: Peter’s and my first Covid shots earlier this week 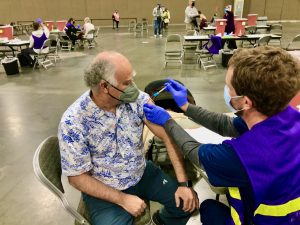 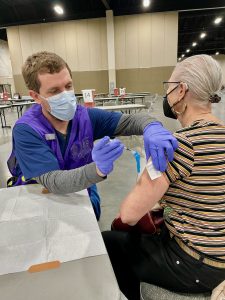 By now, I have listed enough of my quotidian happinesses to match 6 of the 7 rainbow colors you may have learned in nursery rhymes or through the mnemonic ROY G BIV: red, orange, yellow, green, blue, indigo and violet. These colors were assigned to the rainbow by the pioneer of optics, Isaac Newton, while he used a prism to separate sunlight into a color spectrum. However, Newton—a serious student of the occult, which, in the 1600s, was not clearly separated from science—”knew” that his number could not be correct: how could there be 7 seas, 7 days of the week, 7 sins but only 6 colors that blended together to make white light? He looked at each color band more closely, and decided that a seventh shade could be identified in the blue band: between blue and violet, then, he placed indigo. 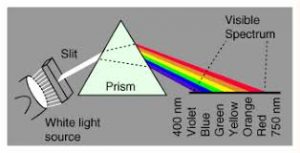 Interestingly, many modern visual presentations of the rainbow have reverted to 6 colors, omitting indigo—one mundane reason is that a 6-color printing process is cheaper than seven-color one. Another, the difficulty of sourcing the correct colors of fabric for the production of all things rainbow. For example, the most common variant of the Pride rainbow flag in recent years sports 6 colors rather than the original 8. (During the first years of the flag, each item was laboriously made by sewing together the different color strips.) 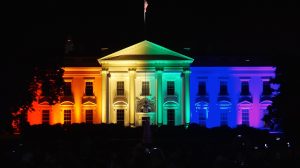 The White House decked in 6 Pride colors to celebrate the Supreme Court ruling that makes same-sex marriage legal (June 30, 1015)
For reasons that might be occult—in the sense that I love the serendipities of disconnected ideas that magically cluster around the same number or symbol across multiple cultures and centuries—I’ll indulge my sense (à la Isaac Newton) that one more happiness is needed to wrap up this blog post. Hence,
indigo: Carl Sandburg’s poem, “Bubbles”:

Two bubbles found they had rainbows on their curves.

They flickered out saying,

“It was worth being a bubble, just to have held that rainbow thirty seconds.”

Isolation & Connection: a RadioWest film about how my family and I are coping (or not) with my dementia during the COVID isolation A question I get from readers: “Gerda, how will you die when your quality of life becomes unacceptable?”