In villages God does not live in corners

he holds his half of the double doors.

He’s plentiful. In the iron pot there.

Cooking the lentils on Saturday.

He sleepily jigs and bops in the fire,

he winks at me, his witness. He

assembles a fence, he marries some sweetheart

off to the woodsman. Then for a joke

he makes the warden’s every potshot

all just short of a passing duck.

The chance to watch all this up close,

while autumn’s whistling in the mist,

is the alltime blessed gift there is

in villages, for the atheist.

Below, “villagers” who do not live in corners 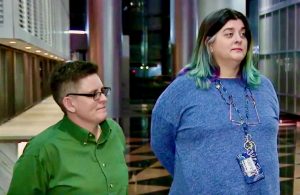 Left: Deborah Waldron (Physics) and Laurie Vena (Chemistry) teachers at Yorktown High School in Arlington, Virginia raised money for $100 grocery gift cards for each of the approximately 8,300 Arlington Public Schools students who receive their main daily meals at school. Middle: drag queen Gary Marion, together with other queens who can no longer perform due to the coronavirus pandemic, are now making face masks for healthcare workers. Right: volunteers sort donated grocery items at a community food bank.

This Spring Equinox, as we acknowledge our weakness in the face of a microscopic virus, may each of us—whether we are atheists or believers—find a meaning to encompass our individual or communal hope that life will prevail over death. Whether you mark the earth’s seasonal return from winter to spring through

This Spring Equinox, (no matter which—or none—of many different Spring Equinox Celebrations Around the World you commemorate), may you, like Brodsky’s atheist in “Villages,” find “glimmers of the Absolute in every particular” (Chet Raymo.)

For the Sun is returning to us.

The Spring Equinox is a moment when the darkness and the light are in balance: on the dark side, our lament: our acknowledgement that things are hard and that we feel their weight; on the light side, our certainty that—some day in the near future—things will be better and our lightness of being will again come forth.

In villages, a generation apart

Left: Dance Around the Maypole, Pieter Breugel the Elder (born between 1525–1530, died 1569). Right: Preparation of the Spring Beds, Pieter Breugel the Younger (1564–1638), son of Pieter Breugel the Elder, who died when the child was about 5 years old; accordingly, Pieter the Younger received no training from his father. The father died and the son was born during a time when the bubonic plague was again rife Europe for the umpteenth time since the Black Death (peaking in Europe from 1347 to 1351) resulted in the deaths of an estimated 75 to 200 million people in Eurasia. It seems, however, that father Breugel died of something other than the plague.

Guest post by my sister-in-law Ria Saunders, 78 today: “Angels in Israel” Crazed by Cruella-de-Virus, Doña Quixote shops her closet for “athleisure”; failing, she concocts “streetwear” she fancies Glenn Close might go for