A RadioWest “Staff Pick”: short film series about Gerda and her family’s life with dementia

Click here to see the so-far complete RadioWest films about my dementia.

RadioWest and I go way back. In 2001, Doug Fabrizio interviewed me on his then brand-new “intelligent” show about my book of short stories that dealt with my family’s emigration from South Africa to Utah. Doug had thoroughly read my book (no, studied it), prepared thoughtful questions that brought out nuances that mattered to me, and treated me with utter respect. Little did I know then that I would eventually participate in a film project with this kind, meditative professional, and that RadioWest would play a momentous part in a life challenge more difficult for me than immigration: my diagnosis—in 2011, at age 61—with microvascular disease, after Alzheimer’s the leading cause of dementia. 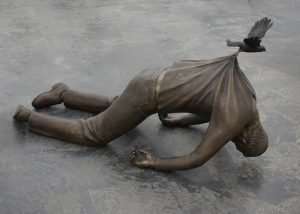 Trans ī re, or The Passage, Frederick Raddum (2017). (“Powerful Bronze Sculptures Tell the Story of European Migrants in Search of Utopia“.)

As I was putting the finishing touches on my memoir, Memory’s Last Breath: Field Notes on my Dementia, Doug and his producer, Elaine Clark, invited me to participate in a series of films about how my family and I are living with my dementia. That’s how RadioWest became part of my dementia journey and advocacy. After five films and a radio interview, I count Doug, Elaine, and videographers—first Josh Weathers, then Kelsie Moore—as part of my made-in-America family. Doug’s sensitivity to my emotions allowed me to open my heart. The whole team’s preparation for hours-long interviews with me and my family was unbelievably thorough. Their knowledge of dementia went much further than the information in my book. The interviews were at times very emotional. Doug, Elaine, Josh, and Kelsie were sharp observers of my psychological state, and frequently offered to stop if the discussion was too much for me. I felt respected—and loved. Filming time was marked by deep—I can say spiritual—connection, tears (not only me), lots of laughter, and total professionalism—not easy to pull off while they filmed me in weird situations, for example, as I struggled to shower and get dressed!

Since my diagnosis, I have learned that I have thirty thousand Utah dementia buddies. Alzheimer’s/dementia is the fourth leading cause of death in Utah, while it’s “only” the sixth leading cause of death in the U.S. Moreover, ours is among the ten states where dementia is increasing faster than in the rest of the country—a 40 percent increase of dementia patients is predicted over the next seven years in Utah. Nevertheless, my experience (and that of the Alzheimer’s organization) shows that many Utahns with dementia in the family do not talk about it.

My peers at my Utah Alzheimer’s Association support group and I have experienced the stigma and shame associated with dementia in our state. For this to change, our citizens have to know more about dementia. Because of RadioWest’s videos of me and others with brain diseases and radio interviews with experts in the field—for example, David Shenk, who wrote The Forgetting: Alzheimer’s: Portrait of and Epidemic—thousands of people have been reached in Utah and elsewhere, as is evident from the people who recognize and talk to me in the library, in Costco, in Las Vegas, as well on the Champs d’Elysées in Paris where a French citizen stopped me to ask if I were the woman in the dementia films featured in Slate.

Pierre Bachelier, who recognized me on the street in Paris after seeing a RadioWest film. He now has newly graduated as “maybe the the only cool tax lawyer ever” from the EuropaCollege in Brugge, Belgium.

My story, of course, is just one of the hundreds that RadioWest has told on radio or in film. Their programs about people who cope with mental and physical challenges have been an education for me, as they are for my fellow Utahns as well as out-of-state-ers. My goal since my diagnosis has been to make a positive difference in the lives of people with dementia and those who love them by showing that my life is still very happy. RadioWest is helping me realize my goal.

Doña Quixote gets a makeover Aliya Saunders, 9 years old, guest post: “This is about my ouma and oupa and me”