All is Vanity: Gerda, AFTER

When my opthalmologist told me that I would benefit from eyelid surgery because my droopy eyelids were obscuring a large portion of my upper visual field, one of the first things that came to mind was gratitude that there was such a thing as Medicare and that they would pay–“they” being the two different government funds consisting of my and all the other taxpayers’ 1.45% FICA (Federal Insurance Contributions Act) on every penny we earned; plus our employers’ matching 1.45%; plus tax money designated by Congress for these funds. 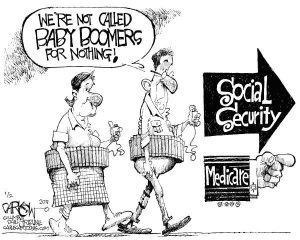 Next there were my ethical concerns: I have always advocated the utilitarian position that medical care should go to the people who need it most AND benefit from it the longest. I certainly did not need the surgery: while it would be nice to not have to stretch my neck like a llama’s to reach a height from where the top of my computer screen would be included in my visual field, I could not–like other surgery recipients–claim that I was a danger on the road without it. (I had actually given up my driver’s license six years ago.) As for how long the benefits would last in my case: my ability to see over the next ten or so years is, in fact, going to be determined by my unfixable brain rather than my fixable eyes; the concept of “diminishing vision” would, in years to come, apply to me in the sense of abbreviated foresight, that is, I will lack (am already lacking) a “vision statement,” “a road map indicating both what an entity wants to become and guiding transformational initiatives by setting a defined direction for its growth.” In this context, can I honestly justify an expensive surgery funded by taxpayers, even if I contributed to the cost myself?

Doña Quixote: “Don’t want no Cap’n Crunch, don’t want no Raisin Bran/ Well don’t you know that other kids are starvin’ in Japan?”

Max Scheler: Modern philosophical jargon has found a revealing term for…one of the many modern substitutes for love: “altruism.” This love is not directed at a previously discovered positive value, nor does any such value flash up in the act of loving: there is nothing but the urge to turn away from oneself and to lose oneself in other people’s business. We all know a certain type of man frequently found among socialists, suffragettes, and all people with an ever-ready “social conscience”— the kind of person whose social activity is quite clearly prompted by inability to keep his attention focused on himself, on his own tasks and problems. Looking away from oneself is here mistaken for love!

Erma Bombeck: Remember all those women on the Titanic who waved off the dessert cart!

Reader, I went for the dessert.

As the beneficiary of a smorgasbord of surgeries, let me just say that this one was a breeze. Contrary to my many toe and foot fixes, colon shortening, and “feminine” surgeries, I have not had a single pain tablet after this one. No wonder–it started out as a lot of fun with face painting.

Left, my magnificent surgeon, Tom Oberg, measures and marks my eyelids. Right, not my face, but an example of how the eyelid is marked before the surgery.

Peter hung out with me before the surgery, keeping me laughing all the time as usual. He loves being present when I get that first “relaxing shot” before being wheeled in. He reports that, this time, I kept on asking him for another hug or kiss, until Dr. Oberg whisked me off to the operating room.

Let me tell you about Thomas J Oberg, MD, Eyelid and Facial Surgeon, who did my surgery. He is originally from Long Island, N.Y., served in the United States Marine Corps before graduating Summa Cum Laude at the University of Arizona, and subsequently received his medical degree from the University of Arizona College of Medicine. After completing his residency in ophthalmology at the John A. Moran Eye Center at the University of Utah–where he was the recipient of a prestigious research award–he completed a fellowship in oculo-facial plastic surgery at a Salt Lake City medical group known as Oculoplastic Surgery Inc, where he received advanced training in cosmetic and reconstructive surgery of the eyelids and face.

All done: how time flies with a bit of propofol!

However fabulous Dr. Oberg’s resume, it does not even come close to conveying the essence of this man: he is the kind of professional, funny, engaged, kind, widely read, and wise person we all wish our kids to grow up to be. Thanks, Tom Oberg, for making this potentially unpleasant experience so easy for me!

Besides, Dr. Tom Oberg has the rugged good looks of a young Telly Savalas? (How my age is showing…)

And then it was Peter’s turn for making things easy for me, particularly because I was to remain blindfolded for 24 hours. Fortunately I had memorized his rugged good looks–a mature Telly Savalas, with the addition of eyebrows so magnificent I have given each its own name. Let’s just say he clocked up as many steps on his fitbit that day as one garners during a daylong sightseeing excursion in Rome!

Left, on the way back home from the hospital, Peter stopped at Starbucks to get me my indispensible single decaf latte and a breakfast sandwich. That night he made me a lovely meal that I could eat with my hand: grilled sausages and a salad, all rigged into a sandwich that was easy to get to my mouth. Right, he kept the frozen peas coming with which I had to ice my eyes for 20 minutes every hour. I adore Peter’s eyebrows: left, Brolloks; right, Bittergal. “Who loves ya, my babies!”

By the evening, my blindfold had become a bit worse for wear and quite uncomfortable as I had smushed it when I unwittingly tucking my face into the gap between the two seats of the couch while sleeping off the anaesthetic.

An unappetizing blood stain had appeared over one eye. When Marissa came over a bit later, we decided to change the blindfold. Unfortunately neither our regular nor our earthquake medical supplies had the right bandage to replace it. Marissa and I had the same idea at the same moment: a panty pad! I told her where to find one. She ripped it off the plastic that protects its sticky back and laid it soft side over my eyes. Then she fetched a tissue to stick onto the adhesive  so it would not get stuck to everything. Peter watched in bafflement. “I can’t figure out what the hell you guys are doing,” he said. Marissa and I chuckled with the satisfaction of two women who know their way around a panty pad!

Peter was very helpful in trimming off the excess tissue so that I would not suck the tissue into my nose every time I breathed. Won’t someone please get this man a lollypop?

On Friday morning, the day after my surgery, I was allowed to take off the blindfold. The world looked marvelous, if not my face…

Nevertheless, he still loves me…

In the afternoon, I donned Peter’s huge sunglasses and we went to Dr. Oberg’s office for a check-up. He declared me way ahead of the healing curve for the first day after. The next day we celebrated by doing errands and going to Starbucks for coffee. The people there whom we know well had been forewarned about my upcoming surgery and they all wanted to see what I looked like behind the glasses. I obliged. Trick or treat! They felt so sorry for me I got free coffee!

I don’t mind the temporary unsightliness–for the first time in decades, I can see the tops of my irises!

Let’s see now: what else can I have done? Will have to visit that dishy Dr. Oberg again soon…

All is Vanity: Gerda BEFORE For Christmas, Memory’s Last Breath gave me yet another gift