One of  the claims that speakers at the October 2021  Alzheimer’s World Summit was that dementia could be reversed or cured.   Lifelong die-hard science groupie that I am, I was immediately suspicious. While thinking about, promoting, and preparing for the conference, I tried to learn as much as I could about slowing/preventing/reversing/curing dementia in the contexts of both complementary/alternative/intergrative medicine as well as Western medicine. On prevention and reversal, the two forms of knowledge has some common ground. 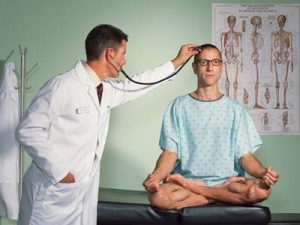 While even I swear that meditation works to fill my head with peace, the most evidence-based medicine can say is that trials shows that it provides “modest benefits” in anxiety, pain, and depression. However, “larger-scale randomized, rigorous trials are needed” (Scientific American).

The two camps agree that interventions exist that can slow and possibly prevent dementia, though non-Western medicine is far more positive about the likelihood and offers more treatments toward it than Western medicine; at the same time, non-western medicine almost totally lacks the peer-reviewed control-group trials so revered in Western medicine. However, there are seven pillars for a brain-healthy lifestyle over which individuals might have control on which the two sides agree: Regular exercise, Social engagement, Healthy diet, Mental stimulation, Quality sleep, Stress management, and Vascular health. While the particulars of treatment vary widely between the two camps, the pillars, at least, seem to stand.

A few anecdotal reports about reversals of memory-loss and other dementia-related losses exist on either side. In one dramatic account, albeit in a newspaper rather than a scientific journal, Western medicine treatments at the University of Florida’s Center for Movement Disorders and Neurorestoration lead to a “cure“: “The Woman who Recovered from Dementia.” The punch line is that the underlying condition turned out to be a brain tumor (removed through surgery) and not one of the 200 recognized forms of dementia.

In another “miraculous report, “a diet of blueberries and dark chocolate” “reversed” another woman’s dementia: Sylvia Hatzer was diagnosed with Alzheimer’s in December 2016 and it progressed so fast that within months she forgot even who her son was. It turns out that her cure consisted of somewhat more than “blueberries and dark chocolate”—and even more than her son Mark reports when he says, “Everyone knows about fish but there is also blueberries, strawberries, Brazil nuts and walnuts—these are apparently shaped like a brain to give us a sign that they are good for the brain.” Sylvia’s diet was, in fact, an enhanced version of the Mediterranean diet, the Green Med, which adds plant-derived iron and protein to make up for the original version’s depletion of the body’s iron stores when dietary meat is decreased. Interestingly, proponents of the Green Med diet emphasize that it works at its best if combined by the other 6 aspects of the “seven pillars.” Through Western-style trials, the Mediterranean diet and it’s green version have already been verified  as the best treatment for managing heart-related risk factors, including decreases in body weight, cholesterol, and blood pressure. From a science perspective, Sylvia Hatzer’s improvement can be explained through the fact that the inflammation in her brain, a chemical change in the brain associated with Alzheimer’s, was decreased through a diet high in antioxidants. Even her son Mark does not claim “recovery” from Alzheimer’s, but rather “improvement.” Sue Clarke from the Alzheimer’s Association also does not consider Hatzer’s case as an example of complete reversal. “It’s fantastic that Sylvia and her son Mark have taken action to create a personal plan that works well for her dementia diagnosis,” she says. “There currently no cure or way of preventing the progression of the condition, but taking regular gentle exercise, eating a healthy diet and doing cognitive exercises can help someone with dementia manage their symptoms more effectively.

Sylvia Hatzer with her son Mark, who helped her follow a diet high in antioxidants that helped her to considerably reverse some of her dementia symptoms

In the over twenty science journal articles about curing dementia that I read over 3 months while preparing for the Summit, I came upon only one treatment that sometimes offer a dramatic reversal of dementia to the point that Western doctors think of it as a cure. One such example is the case of John Abraham, who had had “enjoyed robust health throughout retirement, but began to lose his mind in late 2019” at the age of 80. In an article titled  “The Dementia that can be Cured,” neurologist  Sarosh Iranii’s reports on her treatment of Abraham’s disease at the John Radcliffe Hospital, University of Oxford. Iranii diagnosed his dementia-like symptoms as autoimmune dementia. In this condition, the symptoms of memory loss and confusion are the result of brain inflammation caused by rogue antibodies binding to the neuronal tissue, rather than an underlying neurodegenerative disease. As soon as treatment that includes steroids and other immunotherapies begins, dramatic improvements are often reported. “Patients can go from being in a nursing home, unable to communicate, to returning to work, being able to drive again,” says Eoin Flanagan, a neurologist at the Mayo Clinic in Rochester, Minnesota, one of a handful of centers in the world along with Iranii’s research group, that is actively studying autoimmune dementia.

Above: The  before PET scan of a 68-year-old woman with a 10-year history of cognitive difficulties shows prominent hypometabolism with a pattern suggestive of Alzheimer’s disease

Above: The after PET scan of the patient after treatment with immunosuppressants. As the scan gradually approach that of a normal brain, the patient’s cognitive abilities improved dramatically.

The outcome of my research, then, is that my survey found that only autoimmune dementia out of the over 200 different defined subtypes has been shown through peer-reviewed research to be curable.  Notably, this dementia does not result from an underlying neurological condition as the other dementias do. This outcome shows me that I should refine my former skeptical conclusion “dementia cannot be cured” to “autoimmune dementia can be cured, but no cures have been recorded for any brain that has already been neurologically damaged through dementia.

Now that the Alzheimer’s World Summit is over, I have not changed my mind. None of the speakers gave any persuasive evidence of any method that can cure dementia. I am convinced, though, that being touched by therapists in the course of treatments plus being give one-on-one attention can improve the bleak life of someone with dementia. But rather than chase after unproven cures, I think it’s better to accept your dementia diagnosis, inform yourself of it’s stages of getting worse, and plan your affairs to be ready for it. There is much grace and joy in living a life of acceptance and, if you’re diagnosed early like me, time to make sure you have made your peace with everyone you love and who love you; and time to live with attention in every moment of rationality that your disease still allows. Live as big as you can, love big.

Summit speakers who claimed that their treatment could prevent, reverse, or cure dementia

Happiness and Prevention of Alzheimer’s

Marci Shimoff, Happy for No Reason

The 6 Pillars to Slowing and Reversing Aging

Debra Poneman, Founder of Yes to Success Seminars and Co-Founder of Ageless

The Power of Movement and Neuroplasticity

Anat Banian, Developer of the Anat Baniel Method of NeuroMovement® Author of Move Into Life

Functional Medicine and Healing of Our Bodies

How to Remember Anything

One day of the Alzheimer’s World Summit was about the caregivers who help make dementers’ lives livable and joyful Dementia news today: Gerda does the dishes!