Andrew Solomon (photo: Annie Leibovitz, from Solomon’s website) is a professor of psychology at Columbia University, and a regular contributor to The New Yorker, NPR, and The New York Times Magazine. He is also a gay man raising four children with his partner and a lesbian couple–he and his husband are each the biological father of two of their brood. Solomon is an activist and philanthropist in LGBT rights, mental health, education and the arts. 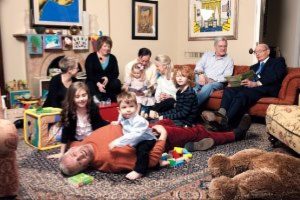 Photos: Portrait of a Modern Family M. SHARKEY FOR NEWSWEEK

Two of his best known books are The Noonday Demon; An Atlas of Depression and Far from the Tree: Parents, Children, and the Search for Identity. In the Noonday Demon, he writes about his own depression, which was partly triggered by his participation in obtaining a legal assisted death for his mother. Even though he theoretically supported the idea and helped her carry out her suicide, he suffered a severe depression afterwards. After reading the chapter from his book about this, I sent a copy to my family so that they would be aware of the possibility that they, too, might be affected in unexpected ways should they persist in helping me to commit suicide sometime in the future when I will no longer be rational. 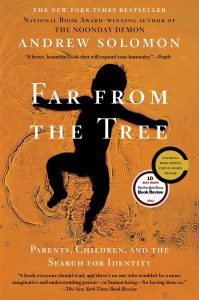 In Far from the Tree, Solomon writes about families of individuals affected by a spectrum of cognitive, physical or psychological differences: “They are deaf or dwarfs; they have Down syndrome, autism, schizophrenia or multiple severe disabilities; they are prodigies; they are people conceived in rape or who commit crimes; they are transgender.” His interviews yielded nearly 40,000 transcript pages and his “anti-Tolstoyan” conclusion that “the unhappy families who reject their variant children have much in common, while the happy ones who strive to accept them are happy in a multitude of ways.” During his research, he developed close relationships (entailing multiple visits, unsparing communication and significant follow-up over a number of years) with the families who appear in his book. 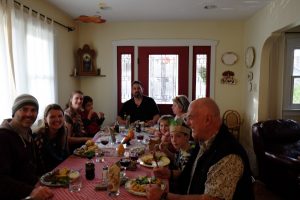 I feel so honored that Solomon took the time to read the advanced copy of my book that my press, Hachette Books, sent him, and that he wrote me such lovely words:

“This courageous and singular book describes both the indignities inscribed in the erosion of memory and the surprising grace to be found in that experience. At once observer and subject, Gerda Saunders demonstrates how a powerful intellect can remain undiminished even as other mental capacities are compromised. Her book’s lessons in dignity will be invaluable to anyone facing the complex meanings of dementia.”

–Andrew Solomon, National Book Award-winning author of The Noonday Demon and Far from the Tree

Gerda is having a live talk with “Being Patient Alzheimer’s” TODAY April 23 at 7 p.m. EST/5 p.m. Mountain Time/4 p.m. PST on their Facebook page.