Ask Doña Quixote: what is the difference between Alzheimer’s and cerebral microvascular dementia?

Every now and then I get questions about dementia from readers of my book or blog. Since I am not an expert in neuroscience or any other medical field related to the brain, I usually steer away from medical-style answers and instead ask if my commenter if they’re worried about dementia in themselves or their family, tell them the symptoms that led me to the decision to seek a diagnosis, and suggest they see their doctor. However, the other day I received questions from a blog-follower who said they had read my book did and did not find answers there about the difference between Alzheimer’s and cerebral microvascular dementia, which is the kind I have. Since providing a detailed delineation of the difference between the two diseases fell outside the scope of my book, I thought that it might be useful to give a short answer here, since I have encountered confusion on this topic before. Credit for main image: familydoctor.org

I’ll start with a related confusion that people I meet in the mall, coffee shop, or elsewhere often have: what is the difference between Alzheimer’s and dementia? As the diagram shows, dementia is an umbrella term for various diseases that affect memory and cognitive function. 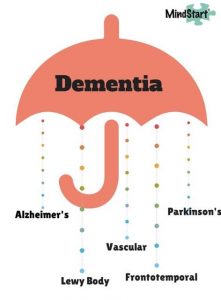 The diagram indicates that Alzheimer’s-, Parkinson’s-, (Micro)vascular-, Lewy Body-, and Frontotemporal disease all fall under the dementia umbrella. Other diseases can cause dementia too. Picture Credit: MindStart

What is the difference between Alzheimer’s and cerebral microvascular disease?

Alzheimer’s and microvascular dementia are the two most frequently occurring dementias. Each of the other dementias listed above has its own symptoms and causes, though all dementia’s lead to the same endpoint: the total inability to interact with people and the world.

Alzheimer’s, on the other hand, is a neurodegenerative disease: a set of conditions that primarily affect the neurons, (the building blocks of the nervous system), in the human brain and spinal cord. Neurons normally don’t reproduce or replace themselves, so when they become damaged or die they cannot be replaced by the body. Other examples of neurodegenerative diseases include Parkinson’s, Lewy Body, and Huntington’s disease. Neurodegenerative diseases are incurable and debilitating conditions that result in progressive degeneration and/ or death of nerve cells. This causes problems with movement (called ataxias), or mental functioning (called dementias).

Early dementia symptoms are difficult to notice because the persons try to cover them up and argue that they did not make a mistake. Just ask Peter and my family…  Carenotes.

What is the difference in how microvascular disease and Alzheimer’s are diagnosed?

Microvascular disease is detectable in a living patient through medical imaging by MRI even in its early stages. Brain lesions caused by small strokes of which the patients and their caretakers are not even aware, bleeding into the brain from microvessels damaged by blockages, and clearly observable strokes all have the same effect, but just on different scales: they deprive affected brain regions of oxygen, which leads to the death of neurons (brain cells). The dead cells appear white in the MRI scans below, which show successive phases of damage. I have had only one MRI so far, and that right at the time of my diagnosis (6 years ago). On my NRI, the white spots were scattered, such as you can see on the sides of the “mild” image below. They had not blended into each other as in the “moderate” and “severe” diagrams. So far it seemed to Peter and me that another MRI would not give us much additional information at the moment. We try do avoid diagnostic procedures that cost a lot of co-pay money and do not add much to a diagnosis. In a year or two, maybe, I’ll have another one done.

Unlike cerebral microvascular disease, Alzheimer’s is not detectable in a living patient through medical imaging by MRI or other kinds of brain scans. Since imaging or blood diagnostic methods have been developed for most other dementias, a diagnosis of Alzheimer’s is usually arrived by ruling out the others. In addition, neurologists use other methods to diagnose Alzheimer’s with up to 90% certainty:

Alzheimer’s disease leads to nerve cell death and tissue loss throughout the brain. Over time, the brain shrinks dramatically, affecting nearly all its functions. After death, autopsy can confirm the characteristic shrinking of the Alzheimer’s brain as well as the presence of plaques and tangles in the brain matter.

Top left: a brain without Alzheimer’s; right, a brain with advanced Alzheimer’s disease. Bottom, a size comparison of the healthy and diseased brains. Image credit here.

Above: Scientists can also see the terrible effects of Alzheimer’s disease during autopsy when they look at brain tissue under the microscope: Alzheimer’s tissue has many fewer nerve cells and synapses than a healthy brain; plaques, abnormal clusters of protein fragments, build up between nerve cells. Dead and dying nerve cells contain tangles, which are made up of twisted strands of a different protein.

Above: It’s all downhill frome here… Stages of dementia

What is the difference between the initial symptoms and progression of Alzheimer’s- and microvascular disease?

In microvascular dementia, the patient’s cognitive abilities often seem to decline more suddenly related to an event like a minor (hardly noticable) or major stroke or and then remain more stable for a time. In contrast to the step-like decline in vascular dementia, Alzheimer’s is typically more like a slight, downward slope of a road over time: memory gradually declines over time and sudden, significant changes are not usually observed from one day to the next.

The median longevity of people with Alzheimer’s 84.6 years, and the survival rate after the beginning of symptoms is 8.4 years.

The progression of Alzheimer’s and microvascular dementia are measured on the same 7-stage scale. Below is an annotated summary of the stages, in which I filled in the symptoms I experience. By this measure, I am in stage 4 of the disease. Stage 4 is not as bad as it sounds, since the first three stages do not yet appear all that different from normal aging. It’s all downhill from stage 4 onward. Please note that this document consists of my own and Peter’s interpretation of my symptoms, together with information I extracted from my 3 neuropsychology reports, 2010, 2014, and 2016. I share it as part of my attempt to help remove the silence and shame that still accompanies dementia and other mental disorders.

For a great summary of the stages of cerebral microvascular dementia in particular, check out VKOOL.

What is the memory loss I bewail in this early stage of dementia?

Alzheimer's/dementia questions people ask me, My life with dementia

What does it mean to be “brave” when you have dementia?