Despite our 60 year age gap, Ouma and Aliya see eye-to-off-kilter-eye when it comes to style. While, to outwit Doña Quixote, I am trying to simplify my style, Aliya is just getting started on hers. Actually, that’s not quite true: Aliya has been  stylish ever since her newborn days—given that she was wearing a “hair” accessory the first time I met her, Doña Quixote thinks she was born that way. I, however, have enough remaining savvy to give the credit to her stylish mom, Cheryl. As always when a baby girl grows into a little girl, one wonders what happened to the years. How did Aliya get from the adorable newborn whose fashion trademark was a big flower in her hair to an almost seven-year-old who noticed a jacket I was getting rid of in my wardrobe minimilization and asked if she could have it? The jacket will be revealed at the end of the story. In the meantime, leading up to her 7th birthday on Monday, April 17th 2017, look with me at how her fashion sense developed in her short seven years. 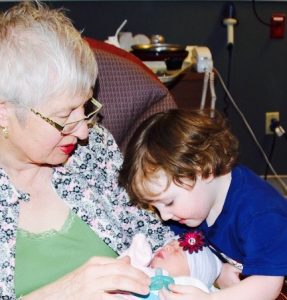 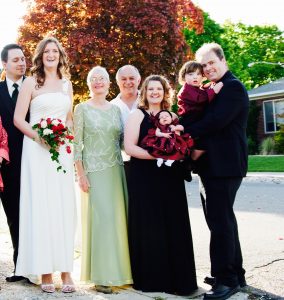 Aliya appears in the world with a hair accessory attached, or so swears Ouma and her big brother Kanye. April 17, 2010. At age 1 month, Aliya attends Marissa and Adam’s wedding in a color-matched ensemble. 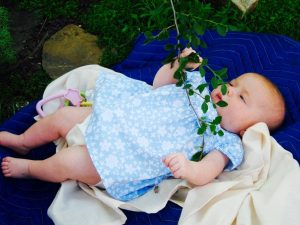 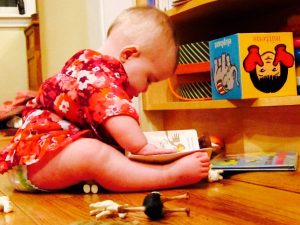 Just when she’s getting hair, Aliya tones down the hair accessories in favor of focusing on natural science and literary studies. 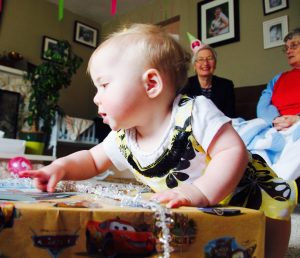 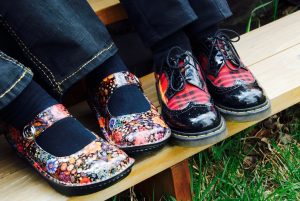 Aliya opens a gift on her first birthday, with Ouma and Grandma Jing Jing looking on. Ouma and BFF Shen attend the birthday party with festive footwear. 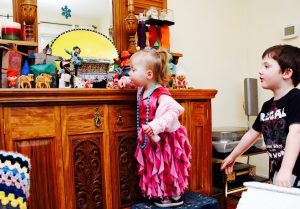 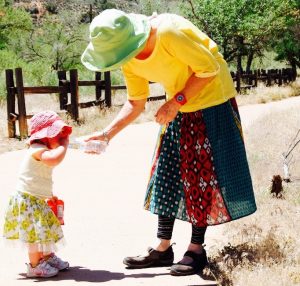 At Christmas dinner 2012 with Ouma and Oupa, Aliya (1 3/4)  and Kanye (4)re- arrange the creche with African animals and an African holy family that dates from Marissa and Newton’s childhood in South Africa. Near Zion’s National Park, Ouma and Aliya don walking gear and set out for a walk. 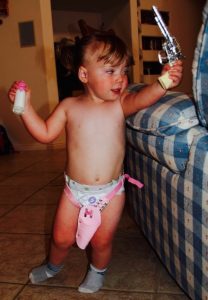 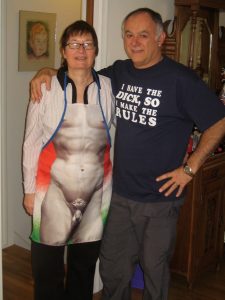 A few days before her 3rd birthday, Aliya was visiting. Her birthday was a frequent topic of discussion. She was going to have a princess castle cake and was wondering which of her princess dresses to wear. When she asked what I was going to wear, I said I hadn’t yet decided. She declared that I should wear my princess dress and led me downstairs to my closet to verify that it would be suitable. I did not tell her that I did not have a princess dress, but went through my closet with her to see what she would pick. She did not like a single thing–not princess enough. In the end I had to haul out a box of clothing I stored under the spare room bed to see if that might contain the answer. She immediately zoomed in on the spring green dress that I wore to Marissa’s wedding when Aliya was just a month old. “Here is your princess dress,” she declared. She told me to wear it with my red patent leather shoes. And so I did. At the party it turned out that Ouma was the only guest who had been invited to/coerced into wearing princess gear. I felt as though I had won the glass slipper! 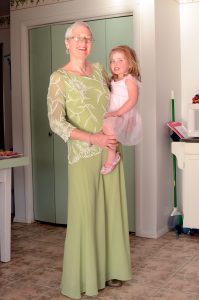 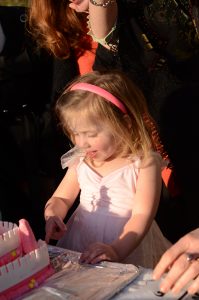 Ouma at Aliya’s 3rd birthday wearing her princess dress. Even though Aliya started out in her own princess dress, she changed into the pink dress she had received that morning as a gift from her parents before all the guests had even arrived. Ouma was the only princess… 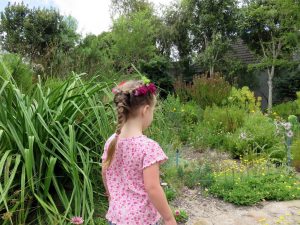 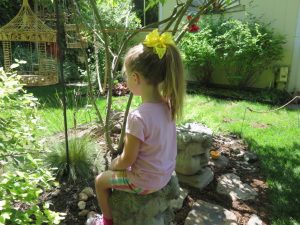 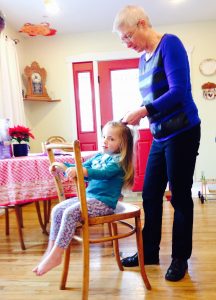 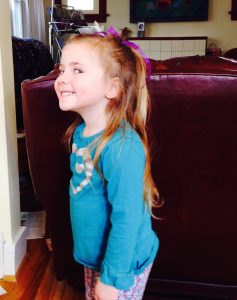 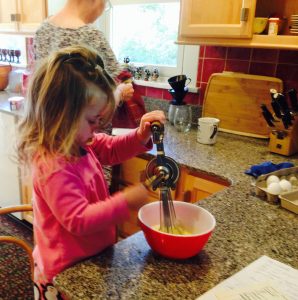 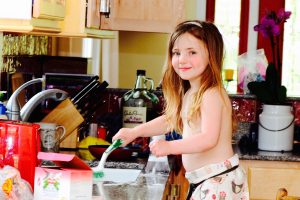 Making breakfast in pajamas and morning hair, washing up while wearing only an apron. 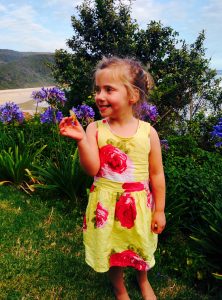 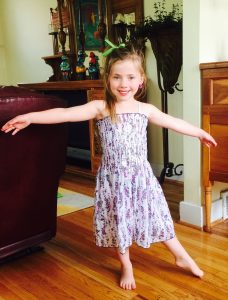 In Noetzie, South Africa, Aliya catches a butterfly that matches her dress. In Salt Lake City, she models the dress she and Ouma bought at the LDS church’s thrift store, Deseret Industries. She is wearing Ouma’s earrings from the latter’s university days. 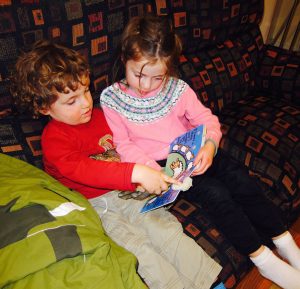 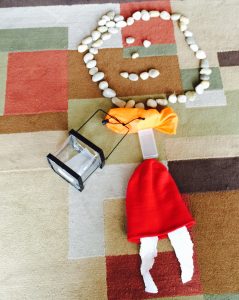 A five-year-old’s is never done: Aliya reads to Dante (3); t Duck Creek, Utah, she whiles away a rainy afternoon with fashion design—she crafted the girl fashion model out of pebbles in the guest house’s bathroom, dressed her in a skirt consisting of a winter hat, and used an umbrella cover for her (yellow) top. Her white leggings are torn paper. The pebble jar becomes an it-girl purse.

During the past year, Aliya has become very thoughtful about how she puts her clothes together. She can always tell you exactly why the pieces go together. She loves to make up outfits ranging from silly to haute couture. A week or so ago I gave her some craft supplies (minimilization…), including a piece of feather boa. Here is how she styled it. 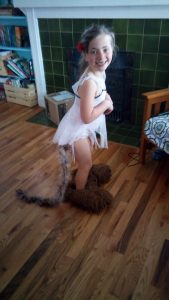 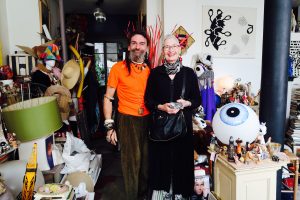 As soon as I gave Aliya my amazing technicolor dream coat, she styled it by rolling up the sleeves. After putting it on, she said, “It needs a belt.” We scoured my belts for something that might work, but could not find anything suitable. I told her that I would find her a belt to go with it. “Something sparkly,” she said. After a while I remembered a silver metallic scarf-belt that might just work–I had bought it in Paris at the end of last year at a vintage store. It consisted of silver links, very finely crafted. I thought it was just the thing for the dream coat, and Aliya concurred.

Happy Birthday, dearest Aliya! Ouma and Oupa will celebrate with you as soon as we get back from Seattle.

Corona virus contemplations, including explication of what the coiff is going on in and around Doña Quixote’s skull