For Christmas, Memory’s Last Breath gave me yet another gift

The day before my eyelid surgery, my unparalleled agent, Kate Garrick of the Karpfinger Agency, sent me an e-mail titled, “You inspired a dance work!!” Kate elaborated that Stephanie Nelson, choreographer and artistic director of a contemporary New York City-based performance ensemble called the Stefanie Nelson Dancegroup, created an evening-length contemporary dance work partly influenced by Memory’s Last Breath: Field Notes on My Dementia. The dance piece is titled A MY NAME IS…, after the jumping-rope rhyme in which the movement “starts out precise and over time becomes disorganized and chaotic: an apt metaphor for memory and forgetting” (NYC Dance). The images (below)  from the performance are from the Stefanie Nelson Dance Group website. 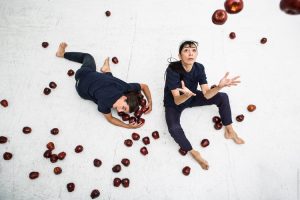 The piece’s emotional origin derives from Nelson’s response to a series of happy birthday messages sent to her by a family member with dementia, who didn’t remember having sent the previous messages. “Each was poignant and quite heartbreaking,” she says. The truth about my inspirational contribution is only half as spectacular as Kate’s announcement sounds: during the research phase of the dance’s coming-into-being, my book was just one of Nelson’s outside influences–the other was Fraying at the Edges, an article by N. R. Kleinfield in the NY Times Magazine.

The dance is choreographed for four performers, and features original music by composers Sahand Rahbar and Jonah Kreitner, with set and lighting designed by Solomon Weisbard, stop-motion video photos by Elisa D’Amico. (BroadWayWorld (BWW))  David Shenk, author of The Forgetting: Alzheimer’s: Portrait of an Epidemic, was Nelson’s Special Project Advisor. (I refer to and quote from Schenk’s book in Memory’s Last Breath: Field Notes on My Dementia.)

My agent Kate found out about the dance work only after it had completed its run at TheaterLab, 357 West 36th Street, New York City. Given that Nelson works not only in NYC but is also the founder and artistic director of DANCE ITALIA, an annual summer dance intensive held in the cities of Agropoli and Lucca, Italy, the piece had preview performances at

“Inspired by the phenomenon of forgetting, the gestural vocabulary in this dance grows in the same way one’s language skills develop and disintegrate over time (learn, repeat, remember, only to forget.) It is a reflection on the absurdity of [a disintegrating mind] with a physical focus on gravity and repetition.” (NYC Dance)

All is Vanity: Gerda, AFTER The day Doña Quixote purloined my pearls…