I have been lucky enough to accumulate four strings of pearls in my lifetime. Last week, I lost them all. 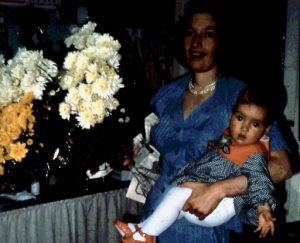 Above, wearing my first pearls on my 28th birthday in 1977, when Marissa was 6 months old. Peter gave me bunches of flowers, wrapped in newspaper those days.

My first pearls were from Japan, which we visited during a 1975 trip to what was then known as the “Far East.” ( I was 26 years old, Peter 28.) It was a triple strand of baroque pearls, i.e., asymmetric pearls, each having its own shape. Sadly, it was stolen during a burglary in our Johannesburg house while we still lived in South Africa. With the insurance money, I bought a single strand replacement, baroque too, that hangs down to my breastbone.

The second string came to me from my mother: she gave them to me a few years before she died, now about 18 years ago. It is a long strand of round pearls that hangs to my belly button.

Left, my replacement pearls for the strand that got stolen over 40 years ago. Right, my mother’s pearls. Originally they were not knotted. About four years ago the string broke while I was wearing them–fortunately in our dining area in our Roberta St house. We managed to gather them all. I had them restrung only last year–$1 per knot, count those pearls!

Over 20 years ago, my friend Shen Christenson brought me, from Hawaii, a string of pink baroque pearls that comes down to my thighs.

Lastly, after my mother’s string broke, I bought myself a cheap single string of fake white round pearls that also comes down almost to my thigh.

I have not worn my replacement baroque pearls for years, but I often looked at them since I was almost ready to give them to Cheryl. I used to wear my mother’s pearls, but have not done so since I had it restrung to give to Marissa. For many decades I have preferred the loud colors and gargantuan size of my over-the-years-acquired vintage and other costume jewelry. Given their length, the Hawaii and the fake strands fit into my over-the-top standard, and I wear them often.

Above, for many years I have foregone my dainty “good” jewelry in favor of large, loud items.

Last week–about a week after my eye-lid surgery–I noticed that my mother’s pearls were not in their box in the drawer where I keep them. It then struck me that the baglet next to it in which I kept my replacement baroque string looked a bit flat–when I checked, it was empty. I frantically looked if the rest of my pearls were there. All gone!

With Peter, wearing my fake pearls.

I was utterly distraught. First I searched the house by myself. Then Peter kicked in, and we searched every nook and cranny. No pearls. It seemed impossible that we could not find them in our recently minimalistick-ed house if they were indeed there.

The first thing I thought of was that I must have given them to Marissa and Cheryl when we minimalized the house, since I had been planning to do so for a long time. I called each of them and sheepishly asked if I had, but they said no. That accorded with my memory–but who knows, my short-term recollection is really shot.

The only other option I could think of was that the grandkids, Aliya and Dante, might have played with them. I had let them play with my other jewelry–cheap costume adornments, almost without exception–and thought they might have forgotten which part of my jewelry drawer was verboten. I asked both Marissa and Cheryl to check with the kids, but they said they had not played with my jewelry for a long time. That matched my recollection–I had not seen them dress up since last summer. When they came over last night, the kids, too, searched for the pearls in case that they had accidentally (as happened before) put them away with the toys when they last played with them. Nothing.

I have often let the grandkids play with some of my costume jewelry: left, Dante and Aliya; middle, Aliya and Dante; right, Marissa, Dante, and Adam.

Very reluctantly Peter and I started thinking that the pearls might have been stolen. I would just not believe that could be the case–I trust every single person who comes into our house. Besides, Peter had installed a doorbell that takes snaps of people coming to the door when we’re not home.

I was really sad and disturbed about the loss. Not so much the material loss as the feeling that the world was not as good as I thought. I could not get the lost items out of my mind. I thought about them while getting dressed, doing chores, taking a shower.

Above, I tried to meditate my lost pearls back into existence while having my twice daily eye rest, with a hot pad over my eye-lid-surgery incisions and bruises–my doctor prescribes this from the fifth day of surgery onward to increase the blood flow, which helps the bruises dissipate. My home-made hot pad is quite a contraption: right next to my skin is a tissue to prevent my eye ointment from oozing into the rest of the equipment. Then comes a sock filled with rice that I microwave and wrap in a white dishcloth. On top of that goes the red oven pad to keep the heat in a bit longer. To hold all this in place and prevent it from sliding down my face during my 20 minutes’ rest, I add a weight I made from a sock at the very top.

Last night when I was sorting the hot pad equipment while getting ready to rest my eyes, when I touched the heavy sock that goes on the very top, I realized that my lost jewelry was all Doña Quixote’s fault!

Having gotten bored with her own jewelry, Doña Quixote stole my pearls!

This is how she did it:

She had put all my pearls in the sock to make an evenly balanced weight: the Hawaii pearls and my replacement strand on the left (plus a red necklace), the fake pearls and my mother’s string on the right (plus a little white string of beads). When I opened up the sock, THERE THEY ALL WERE!

I am so happy, I don’t even care that I look like a fool!

I called the whole family with the good news. They are all salivating to tell this story on me as often as possible in the future…

For Christmas, Memory’s Last Breath gave me yet another gift In a sinuous river, my serpent bites its tail