Dementia Can Go Like This: The Nine Lives of Michael Kelly

Michael Kelly is in his early 70s. He lives with a varying number of cats in a small apartment in Kaizer, Oregon, a small town of about 37,000 people. He has Alzheimer’s. While he has not been formally diagnosed, he has “watched the disease’s progression in [his] mother for 11 years. When you suddenly encounter memory issues after 50 it’s a no brainer. My doc gave me a 6 question Alzheimer’s quiz [MMSE] that was beyond silly.” (Like Michael, I too found the MMSE ridiculously inadequate for spotting the early phases of dementia. Like him, I passed it with flying colors.) And yet, in Michael’s daily life, “everything is getting harder fast. Did you watch Still Alice?”

(All photos in this blog are by Michael, except the ones in which he is the subject.) 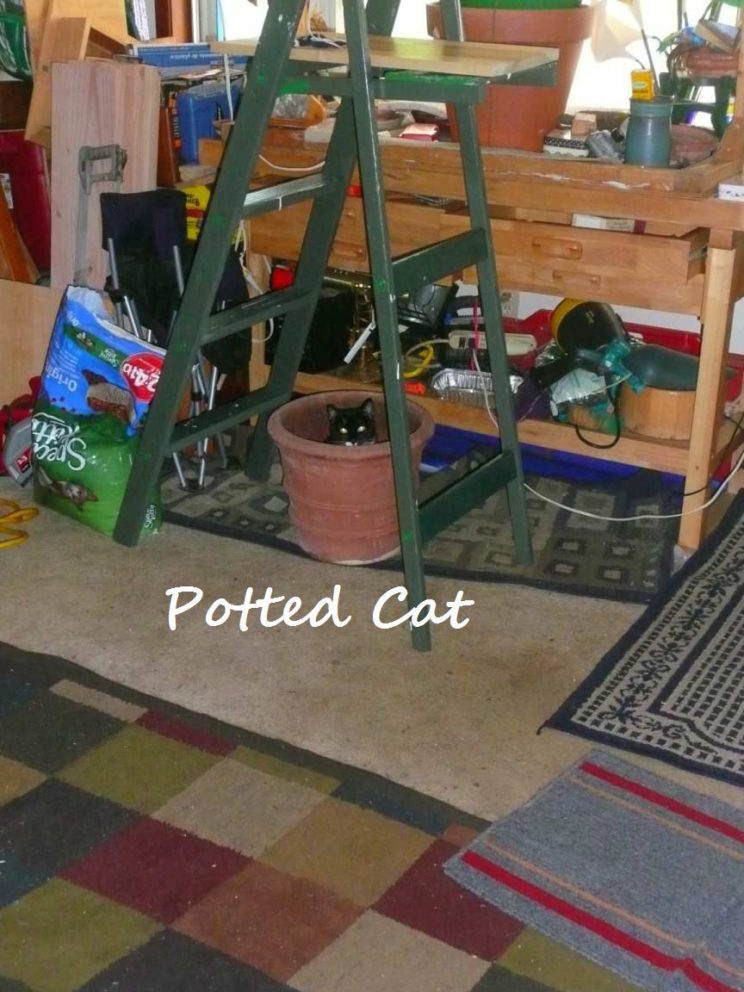 Look at Michael’s Facebook page and you’ll see the wide range of this old Viking’s interests: he is following the presidential election campaign, the gun rights battle, climate change, and sometimes posts photographs he takes of his home and pictures he collects related to history or nature. What his page does not show is his daily struggle to organize his life to maintain his independence. As it is for me, getting lost in time is a problem for Michael: “Timers became necessities years ago. Failure to use one results in disasters.” He has “a [new] idea about how to carry a reminder: I bought a small voice recorder & lapel pin mic. I can set it to activate when it hears a voice. I thought to use it for notes or immediate reminders of events. I’m still using a pen & 3×5 cards but will try this too.” On a longer time scale, he needs a different form of help: “I’m still horrified I nearly messed up paying my rent two months in a row. I’m setting up an auto-pay through my bank soon.”

Michael’s Alzheimer’s began 26 years ago. “The memory lapses began around 1990 [when he was in his fifties] with pots boiling dry and unlocked doors. On two occasions while exhausted I became briefly disoriented.” Like all dementias, his relentlessly growing. “I was taught to turn off lights when leaving rooms. That was automatic for 70 years until last week. Now each day I find lights burning in rooms I have used. No segue, no warnings, it’s just gone.”

Michael is one of the 5 million people with dementia who live alone, many of them in difficult financial straits. “No money, no social life,” he says. After moving from Pennsylvania to Oregon, “I was clobbered by glycogen storage problems that caused leg cramps. My money was drained by a doctor who got kickbacks for tests ordered and he even owned the pharmacy in his office building.”

Possibly worse than his lack of money, is the absence of a supportive community of family and/or friends. “I applied to be part of an Alzheimers trial, but needed [the help of] a friend familiar with me for at least 6 hours a week. Sadly I have no one.” When dealing with hospitals or doctors, he leaves “the box marked ‘In case off emergency please contact’ blank. My closest friend died in January, the other close friend has dementia and resists contact.”

Michael has no one with whom to talk through his health or other daily difficulties. “Last month was difficult for me,” he says. “I’m struggling to do some things I think will help, my head is throbbing from barometric shifts that imprison me near a humidifier. This too shall pass.” In addition, his doctors have discovered precancerous tissue that may signal the return of a previous cancer. “I see them again in July but it causes me no worries at this point. I have other fish to fry that are more pressing.”

Michael attributes his alone state to having lived as “an odd mix of workaholic & alcoholic. By 23 I had 34 employees as the manager of a nightclub. Within 2 years I realized that I was an alcoholic and began trying to become sober. Results remained iffy until age 50. I’m now sober 21 and a half years July 10th, 2016. I spent my first ten years sober running a rental complex in PA. I’d lost my drinking friends when I dried up and [enabling] relationships can hamper recovery so I avoided them.”

Despite all these obstacles, Michael remains upbeat and productive. “Days are spent on the computer, in the garden and often my nose is stuck in a book. I create things to keep me busy & active. Wood projects help but gardening is a godsend seven months a year. When a bit of cash is there, I hunt for classical music CD’s at thrifts as well as VHS tapes.” A wry humor is undoubtedly one of Michael’s most helpful personality traits. “Alzheimers can come with gifts of sorts. I’d never watched movies more than once because my memory left me with each line of dialogue embedded forever (or so I thought). Alzheimers made old movies fresh & new and my local best source sells VHS tapes for 50 cents.”

Michael’s gardening is a godsend not only to him, but most likely to his neighbors as well. “I came here 11 years ago and began growing small trees. I added flowers the 3rd year and have 60 plants on the deck. There’s a garden next to the parking lot as well. I’m late planting this year. Pain dictates my limits.” Given the faunal and floral delight Michael’s photos illustrate (yes, he is a photographer as well), you can see that he is of the “no pain, no gain” school of perseverance. Though Michael has not said so explicitly, I imagine that gardening may be a substitute for an activity he really loved in the past. “Have you ever gone camping Gerda? An odd thing happened to me in my early 30’s. Two friends took me fishing in Ontario on a remote wilderness lake. We camped on an island in a large lake with no people or homes. On the 3rd day I realized I felt sane. Much the same happened again on the Canadian lake and once camping in the Adirondacks. I had no idea I wasn’t sane until I became sane. A natural sense of peace filled me. I think our 21st Century lives are extremely stressed and only by removing that stress are we one with ourselves. A book, wilderness and a fire become magical. For me it’s also a touchstone and a refuge although one I can manage only once a year and then for too short a time.”

Earlier in his life, Michael was identified as “having been gifted with a genius IQ.” While living in Pennsylvania, he passed the MENSA entrance requirement and attended a local chapter’s meetings. “The weird thing is my mind still seems pretty agile but I’m nothing like the me I was. Pretty sure I could even ace the Mensa exam again but not as fast as last time….”

Michael’s intellectual curiosity and varied interests have resulted in his amassing of a lot of “stuff.” He used to have a file of images in his head “that kept an inventory. When that fell apart, it was like something swept away all my trails of breadcrumbs. Each time I needed an object it meant hours of searching. I needed a new system so I started building one.” If—like me—you were wondering what fish could possibly be more pressing to fry than cancer, here is the answer: building an organizational system with “a place for everything and everything in it’s place.” When Michael says “I have started building an organizational system,” he is not talking about filing cabinets or computer folders or organizing his spice rack alphabetically. No, he means it literally.

When Michael moved into his apartment over a decade ago, he opted for “a workshop rather than a living room.” First, he organized his wood working tools in “cases, chests and tool boxes aplenty.” Buying supplies is an ongoing challenge. “It’s a shock seeing the prices of lumber here. I thought Oregon would be a haven for wood workers but I guess the spotted owl ended most of that. When possible, I cannibalize any discarded wood & hardware that gets tossed out.” Thus armed with tools and material, he built two large floor to ceiling bookcases and a new bed over the winter. He has already moved his large collection of VHS tapes and books into place and has space “to place daily needful things in designated places.” A third storage wall is near completion. Also still in process is “the most organized bedroom in history. My back prefers 4 pillows for support. My bedroom is an entertainment/communications center (computer, printer, scanner, etc.)….My future ‘night table’ will be part wall, partitioned bookcase, and drawer holder.”

The system is of course not the cure-all for an almost non-existent short-term memory. “It’s the things without a clear definition of use that confuses it.” Nevertheless, the system has already shown its worth: “My new organizational scheme is working. Yesterday I’d lost my battery charger and just located. It only required a single search effort. I’m prepping for a housing inspection (Section 8) http://portal.hud.gov/hudportal/HUD?src=/topics/housing_choice_voucher_program_section_8 which serendipitously coincides with my reorganization/cleaning efforts.” Michael adds, “It helps me keep sane & motivated too…. Psychologically it feels nice to spend time configuring my home to ease the confusion of always searching for stuff.”

Michael has decided to be open about his dementia, because he has experienced the difficulty of taking care of a dementia sufferer without knowing what she was experiencing. “Mom never let me inside to understand what she faced. It was maddening. Keep explaining to your husband as you go. It may help him weather some tough spots.”

Thanks so much Michael, getting to know you has deepened not only my understanding of other people with dementia, but also of myself. If Michael Kelley’ story has given YOU more insight into the world of Alzheimer’s, do tell “the old Viking” so on Facebook. He most certainly “ain’t dead yet.”

Doña Quixote, a.k.a. My Dementia, Tilts at Windmills in Las Vegas Why Movie Reviews Equating Dory’s Memory Loss with Dementia Irks Me