While I diligently work all the time to reduce my material possessions, I have recently added and item that falls under the category “could live without it.” It is just very nice to have: my telescoping cane from independent living.com. I chose it over the blingy or artsy ones that I’d most definitely have preferred if it were not that it’s the functionality that I want. My stick is relatively cheap,  lightweight, easily extendible, and dependably retractible so I can fit it into my handbag. The only thing wrong with it was that the bottom end was slippery. Peter has now fixed that by adding a rubber tip that prevents it from sliding along the floor like a marble on an ice rink. Among the photos below, mine is in the center. 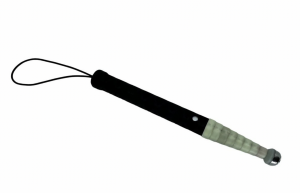 It turns out I’m not the only older person to have made the decision to have a stick or cane. A recent article in the AARP magazine reports that as we baby boomers age and remain active, interest is soaring in trekking poles as well as walking canes and sticks. Sales of the aluminum or carbon variety (like mine), sold singular or in pairs at sporting good stores and websites, is now a multimillion dollar business. 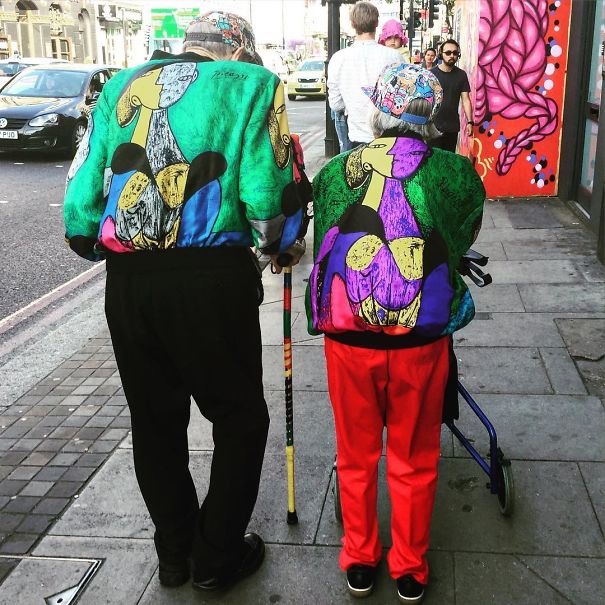 The idea of walking with a support is familiar to me in our family. My sister-in-law Sandi (Marissa’s husband Adam’s mom) had a stroke about six years ago. The left side of her body was most affected, and both her arm and leg lost an amount of strength that prevented her from getting about without a walker or cane and doing her usual range of rafting. Sandi worked extremely hard during her rehabilitation and regained enough mobility to still live independently. She walks well enough to catch the bus, clean her apartment, prepare food, and take her dog Binx for a not-too-long walk. Her hand is functional too. While that hand can’t grip well or lift anything heavy on its own, it can assist her right hand to hold most things she needs. For example, her left hand assists the right one sufficiently that she can knit and crochet again after she went to a knitting class. She inspired me attend the class with her since I, too, could no longer knit even before my dementia diagnosis because I could not read patterns any more (after knitting since I was 5 years old!). After the class, I am knitting again, but only stocking stitch. Sandi is way ahead of me as she was before the stroke! 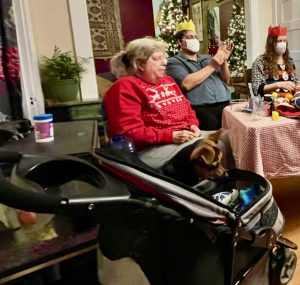 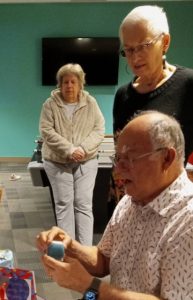 Photos, 1),Sandi with her cane, Boris. 2), Sandi uses her dog Binx’s cart to hold on to when she walks around the shops near my and Peter’s apartment. 3, Sandi, in the background without her cane, leaning onto the pool table for balance at a family event, in the same way I have had to lean on or at least touch a piece of furniture or someone’s arm when I stood still or walked along slowly before I had my stick or, now that I have one, if I don’t have it with me.

For several years, now, I have felt dizzy and unmoored when walking through a large space, such as a not very full parking lot, where I did not have objects in an easy-to-spot pattern or preferably a line nearby for reference. It I was with someone else, I would ask if I could hold their arm. If not, I’d move closer to the cars that were there and follow a connect-the-dots path toward where I wanted to go. This is one of the places where I thought a stick would be handy, and it is. The reason I sometimes feel my stick is just schtick is because I don’t have to use it when I walk fast on an empty sidewalk or in a long corridor like those into which the apartments in our buildings open. In contrast, when I slow down or run into someone who wants to to talk, I need my cane as a point of reference for where the ground is. Once I slow down and stop, though, I lose my balance to the point of stumbling or feeling dizzy. It’s a bit like riding a bicycle: once I have built up momentum and the way ahead is clear, I can walk at quite a clip. (Why do I have the feeling I should add “for my age?”) It’s slowing down and stopping that is the problem. The reason I sometimes feel my stick is just schtick is that I can carry my stick in the hand parallel to the ground whenI walk fast, but then have to tilt it to touch the ground when I stop. Someone watching me do that might very well think I’m carrying the stick for empathy or so they will open doors for me—as many kind people have done since I’ve been using it! 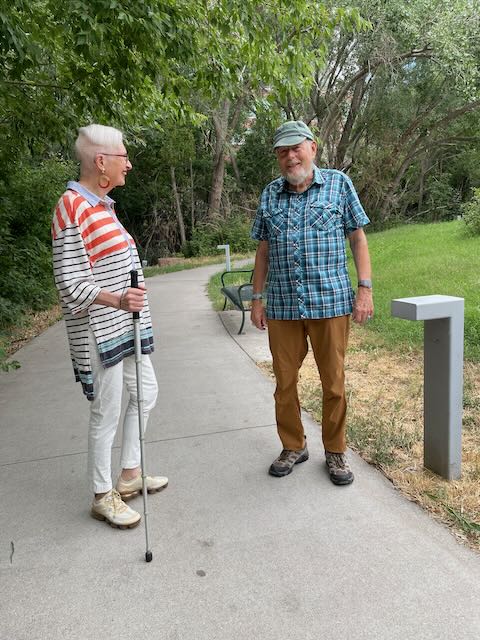 My stick functions something like a swarming object does for midges or gnats.Midges/gnats are mini mosquito look-alikes that often swarm around one’s body or head in summer. It’s usually the male flies that swarm in order to be more visible to the female insects who are trolling for a mate. Typically, swarms form around particular objects or visual markers that might be a reflection above a stream, a fence post along the roadside, or a warm, smelly, sweaty, tearing, perfumed, bad-breathed human or animal that provides them with moisture and salt. Swarms often occur in sunlit. When the shaft of sunlight moves along with the sun’s changing position, the swarm will likely move with it. Although it appears that my cane is moving along with me, it is actually me moving along with my stick. 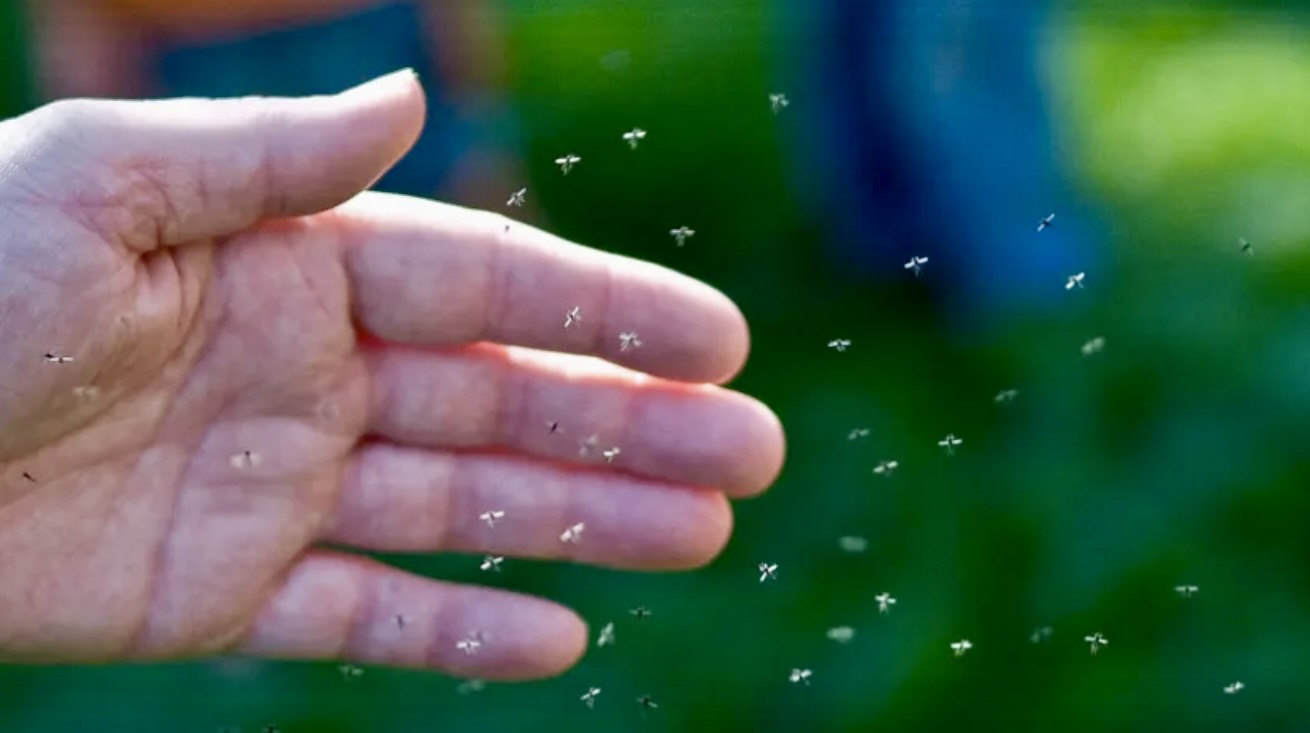 The best thing about Sandi’s cane is that its name is Boris. While writing this post, I discovered that a whole comic/movie culture exist with a Boris and his sidekick Natasha as characters. (Okay, so I grew up on a farm without TV or even a radio. My dad bought a radio when I was in about fifth grade, but all of South Africa had to wait until 1981 to get TV. Marissa was then 4 years old, Newton almost two. One of my most precious memories of those early years was that I taped Princess Diana’s and Charles’s wedding, so that Marissa and I could watch it at a time that worked for her. She must have watched that video twenty times. She would dress up on a wedding dress from our dress-up box before clicking the TV on. However, Boris and Natasha never made it onto TV or (what I know of) comic books. I thought of naming my stick Natasha, but I don’t want to steal Sandi’s idea. So let me know if you can think of just the right name for my Schtick.

If you live or are visiting in my neighborhood of Hidden Hollow in Sugarhouse, Salt Lake City, and see me walking by or standing about with my stick, please stop to say hello! I’m now fully equipped to stand chatting for a while! Below, I’m leaving our apartment to go for a walk, complete with walking stick and jeans swarming with butterflies! 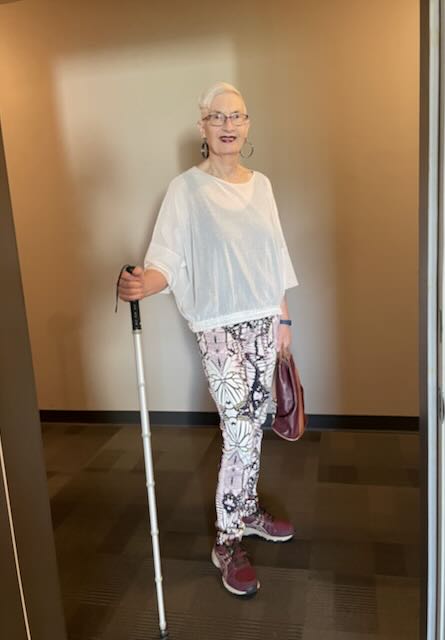 Dementia Field Notes resumed: entry wounds “To say goodbye is to die a little”: Part I