Doña Quixote, Accustomed as She Is To Living Irrationally, Is Applying her Coping Skills to a Trump Presidency

Gerda is lagging behind, scuff lines marking her wild bucking as reality drags her toward acceptance.

Peter and I watched the election results until, by 11 pm, our hope for Hillary was gone. I wanted to stay up until a final call for the presidency was made, but Peter and I have both been sick with colds since our return from Europe to weeks ago and had both lost a lot of sleep. (I’ll be writing soon about the amazing, pre-germ-catching part of our travels.) After we came back, I had even moved into the spare room so we would not keep on coughing each other awake. So to bed I went to wrestle with my worst fears. Early the next morning, I switched on the radio by my bedside–the substance of my nightmares had become a reality. I was so unsettled by the confirmation of Trump’s win, that I–a radio junkie–did not listen to the news all day. I had to withdraw into my own thoughts to start making peace with a fait accompli: other than having to accept a man I don’t respect as my president, it was sad that that, in my lifetime, a woman is not very likely to be elected as president of the United States.

Fun things to do even in a Trump presidency: Ouma and Aliya roll down an irresistible hill at Kanye’s Saturday soccer game.

Part of my day-long post-election blues was given to wallowing in my own sadness, and that of my friends, children, godchildren, and grandchildren. While our children, Marissa and Adam, Newton and Cheryl, had already had conversations with their kids about the value of our democratic system even if the outcome of a particular vote is downright regrettable, nine-year-old Kanye, six-year-old Aliya, and even three-year-old Dante are not so easily persuaded. Dante in particular responds to such reasoning with “Trump is a bad man. I don’t like him.” When Marissa asked him why Trump was bad, he said, “He eats children.” He has apparently developed his own criteria for adult badness.

Dante wearing the outfit Grandma Sandi made for him out of his dad, Adam’s, army camouflage uniform. Adam served in Germany and Iraq. Thank you, my dearest son-in-law, for your service to our country. In the video, it seems that Dante is shooting child-eaters with his stick.

Tonight I heard a line by Leonard Cohen that describes a feeling of lingering sadness, “as if your father or your dog died.” That feeling hung around me all day long on the Day After: I was thinking of Hillary Clinton and her family, their impossibly hard work, their shattered hopes. I was sad for our country, the tone of intolerance and selfishness that may come out of the White House in the coming years. But, as my children emphasized to their children, I deeply respect our country’s democratic system, even though–like most forms of religion–it has in various historical periods sanctioned deception, greed, intolerance, extreme incivility, even torture. I fear that we might be entering a version of such a period.

Fun things to do even in a Trump presidency: Oupa and Kanye play in the home-made ball-pit at Kanye and Aliya’s house.

Unlike many people who think that fleeing to Canada might be a solution, I personally know that emigration really doesn’t solve even close to all the problems of finding an ideal place to live. Besides, situations in a country that at specific times seem intolerable do sometimes change: when Peter and I left South Africa, we did not think that apartheid would end in our lifetime, and yet it was gone a mere ten years after we emigrated. (Now, again, South Africa is a difficult place to live because of a president Zuma that makes Trump look like a godsend.) While I am forever grateful to be a US citizen, I now feel–given the enormous expenditure of soul energy it takes to make a new country your home–that,other than in situations of violence, war, or persecution, it might be as good a use of that energy to help make the place where you are achieve the ethical ideals you hope and dream for it. As Hillary said in her concession speech, “Our constitutional democracy enshrines the peaceful transfer of power and we don’t just respect that, we cherish it. It also enshrines other things; the rule of law, the principle that we are all equal in rights and dignity, freedom of worship and expression. We respect and cherish these values too and we must defend them.” 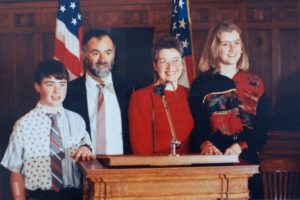 If there is one thing I learned from my dementia diagnosis and–many years earlier, from Peter’s two cancer diagnoses in so many years–time is too precious to waste on what ifs or why me’s or, in this case, why hims. Events of the kind about which you will always remember where you were when you received the news could instead function as triggers for a radical self-examination: who am I, what do I believe, what do I do next to live according to my re-affirmed (or newly revised) principles? These are some of the things I want to think about seriously in the aftermath of Trump’s shocking and unexpected victory: 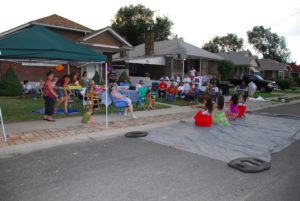 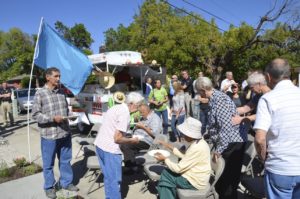 Roberta Street block parties, where never Trumpers and never Hillary-ers enjoy each other’s company.  The kids doing a Tongan dance are part of the Brown family, our slightly-diagonally across-the-street neighbors. The first photo dates from several years ago (2007?), the second is from 2014. Today, after the election, our neighborhood relationships are as close as they were before.)

2. About our new president: Shouldn’t I extend my belief that someone can always change for the better to Donald Trump? I am already encouraged by the fact that he was able to have an apparently heartfelt conversation with President Obama and come to the insight that what Obamacare needed was not ditching but improvement–could he change his mind on other topics once he has better information? Or is this just another instance of him changing his story to what he thinks his audience needs at that moment? While I am wary about expecting someone with a personality close to a mental disorder to change permanently, might Trump not turn out to be a good winner even as he has been the baddest loser ever as his ugly tantrums on the public stage illustrated? I have hopes, albeit tentative and faint, that President-elect Trump’s huge ego, which needs constant feeding of proofs that he is loved and “respected,” may just be the basis of the “pivot” that everyone has predicted for so long–a change toward “being presidential.”  While I doubt that presidentiality is an act that can be maintained over four–eight?!!–years, why not hope that the role of president will shape the man more than the man will shape the role? (Okay, I wrote the above before Trump said on the Sunday morning shows that the WALL is now a FENCE, and that he still plans to incarcerate and deport “millions” of undocumented immigrants who are “criminals”; and that Steve Bannon of Breitbart, whose anti-Semitic views and White Supremacist affinities are well documented, will be his senior councilor and strategist…) So now what? 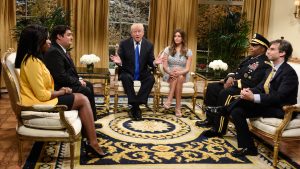 3. I still have to I live daily with the fact that Trump will be my president too–whether I like it or not, he will make decisions that affect me and my family for more than one generation. Do I try to follow both Hillary Clinton’s and President Obama’s urgings to give him a chance to govern? As he transitions to the spotlight of public life, should I forgive him at least the same number of mistakes I forgave President Obama and Secretary Clinton? (What if he has used up my forgiveness already during the election? :)) And should a time come when it is clear that all my positive hopes for our president-elect have been unfulfilled, what, then, would be a productive way to let him know my anger and fury? Because of my energy-sapping dementia, I’m afraid my days of street protests are over–but how I loved them when I was able to participate! 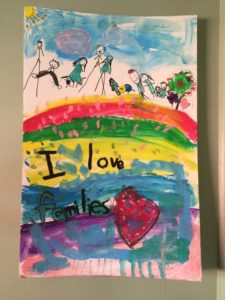 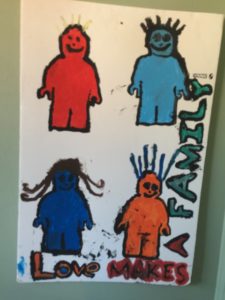 Protesters in training: granddaughter Aliya’s poster is on the left, godson Kanye’s on the right. They participated with me in a protest supporting gay families after the LDS Church declared gay church members apostate and decided not to allow their children to be baptized or participate in other religious sacraments

I am happy that many people upset by Trump’s win are expressing their concern by protesting in the streets. Activism of the loud, visible kind is great for consciousness-raising and awakening participants’ interest in more enduring and productive forms of activism: participation in community organizations providing services to those very groups Trump has denigrated, running for a local office and continuing up the political hierarchy, raising funds for people who are willing to run for office, becoming a constitutional lawyer, creating an action committee with a practical goal and a project plan–be it in the humanitarian, civil rights, legal, or political fields, among others. I am proud that my god-daughter, high-school junior Wilhelmina, has also taken to the street with her poster. I am encouraged by the tone that has evolved over the past week in at least Salt Lake City’s protest movement–protesters are focusing on messages of love, being peaceful and law-abiding, and thanking police officers on their route for helping them practice their right to free speech. But let’s not stop the action once catharsis has been reached. 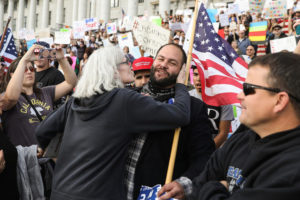 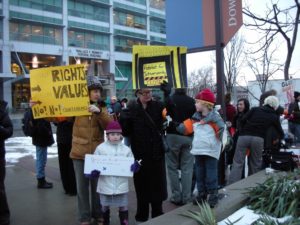 In the meantime, I plan to be an anthropologist who will observe and ponder this distressful but also very interesting new experiment in our 240-year history as followers of the US Constitution. 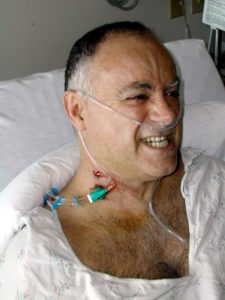 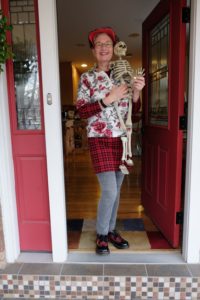 Peter after his second cancer surgery (2004), feeling better enough for a mock grimace. Can he manage the same for Trump? As for the Doña and me, we are heading into the lovely sunshine of another gorgeous fall day and into Roberta Street to hug a never-Hillary supporter or two, and any never-Trumpers we come across, as we have regularly done over our nine blessed years in this our financially struggling but love-overflowing neighborhood.

Gerda Is Overwhelmed with Good Wishes and Editing Overload as She Turns 67—and Doña Quixote, aka My Dementia, Isn’t Far Behind Two Amazing Women Show Gerda that the Boldest Hearts Sometimes Throb under Scottish Terrier Pajamas