Doña Quixote, aka My Dementia, Materializes under the Rafters of Our Back Stoep

Doña Quixote has been a shady presence in my life even before my diagnosis of cerebral microvascular disease 5 years ago. In those days she did not have a name. Nevertheless I knew her as a memory-sucking fiend that often emptied out my head while I was teaching, snatching away the name of a book that I have known all my adult life or disturbing my focus to the point where I completely lost my place in my lecture or forgot a student’s question when I was already a paragraph into my response. The unwelcome colonizer of my head also embarrassed me in meetings when I could not remember the name of a person with whom I had recently communicated a lot or lost track of the conversation and had to ask what the question was when someone suddenly addressed me. 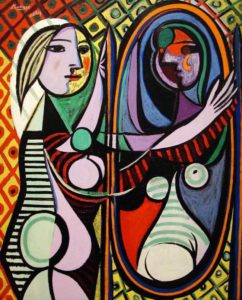 Although she was already a familiar—that is, a spirit of the kind that is supposed to assist witches and wizards but who, in my case, functioned more like a poltergeist—my ego-deflator did not have a name. However, after my retirement, while I was writing my memoir Memory’s Last Breath, I read quite a bit of Don Quixote. Many passages of Miguel Cervantes’s seventeenth-century take on madness, when adjusted for gender, fit me like a Spanx body shaper: “Finally, from so little sleeping and so much reading, her brain dried up and she went completely out of her mind.” During the time when I frequently dipped into the topsy-turvy world of the would-be knight’s lunacy, I myself of course kept on feeling what Charles Baudelaire called “the wind on the wing of madness.” Involuntarily I would think, “I’m being Doña Quixote again.” The name soon found its way into my writing.

Naming my madness helped me get a better handle on it—albeit that I thought of “it” as “her.” Putting her outside of myself as an alter(-ed) ego made her less frightening. I could actually laugh at her. Acknowledging her existence in this way enables me to keep her at a distance. Like our dogs on the farm who were very much part of the family but yet never allowed in the house, Doña Quixote is my outside alter-ego—she hangs from a hook screwed into a rafter of our back stoep. As long as I can keep her OUT THERE, it seems I can preserve the center of my “old self.”

Like our farm dogs, however, Doña Quixote often sneaks her way inside—some days she astrally travels into my head and I can get nothing done. Recently she squatted there for many days, preventing me from writing my blog and also getting other goals checked off my list: getting through the daily tasks of dressing, doing a bit of housekeeping, or running errands with Peter would be so psychically draining that I could only sit and listen to the radio and/or nap for the rest of the day. Even watching a movie seemed to require too much effort.

A few months ago, Peter made a marvelous find at the Mormon “Goodwill,” Deseret Industries. The minute I saw her—apparently retired from her Halloween duties—I knew she was the Doña. I immediately loved her and named her. But I wasted no time in banishing her to the back stoep as company for the many other finds with which Peter and I are not yet able to part. She, too—particularly now that she was a material being—had better stay outside. 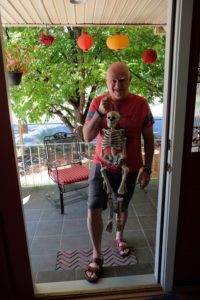 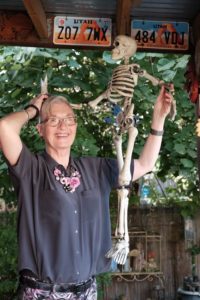 The physically manifest Doña, too, sometimes makes it into the house. That is, when I feel good and have the motivation to actually do something. Peter started it when he came home one day with the perfect dress for the Doña—I immediately fetched her inside for a modeling session. 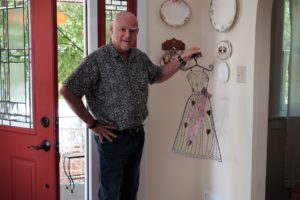 At other times, too, I unhook her to say hi to visitors or play with the grandkids. I have actually invited her inside a few times to talk wardrobe—far be it from me to let any version of my self hang around without the proper accoutrements. So far, other than when she picks her skeleton dress, she still has only a bit of jewelry to wear. But I’m working on her style. 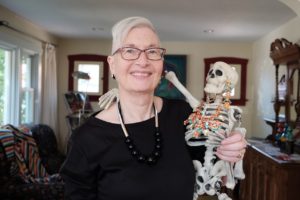 Between the two of us, we have a lot to achieve before the day—to paraphrase Alexander the Great’s supposed epitaph—a tomb suffices her for whom the adornment of an entire fashion industry (Ha! I wish…) was not sufficient.

Disoriented by Dementia: Bruises Visible and Invisible Gerda Is Overwhelmed with Good Wishes and Editing Overload as She Turns 67—and Doña Quixote, aka My Dementia, Isn’t Far Behind