Twenty years after the fact Peter and I are still benefiting from the handful of biggish gambling wins he had in Las Vegas when working in there for a 3-year period in the 1990s—every few months we get three nights of “free” hotel rooms. Which hotel invites us depends on where Peter chose to lose his money the previous time—currently Treasure Island. (Just kidding about Peter’s losing—he usually comes out about even, but in the process enough money passes through their system that they think he must be a big roller…) 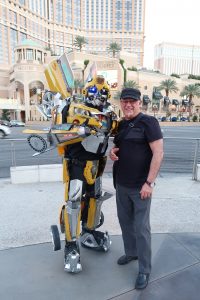 In the foreground, the flying-saucer entrance to the Fashion Show Mall; Treasure Island is the blue-appearing hotel in the background. A walkway high above the traffic connects the two sites. Peter greets an Avenger on the way to the mall.

Despite Treasure Island not being as fancy as some other hotels we’ve been invited to, I love staying there: it is one of a three hotels at the northern end of the strip that have walkways that lead to each other and to the mall. Accordingly, Doña Quixote can leave her hotel room and (aside for a few sidetracks to locate the elevator and navigate her way out of the casino) walk ON HER OWN to a destination; she can actually go for a walk of a few miles outside along the walkways while always having Treasure Island in her line of sight.  And once inside the mall, she only has to ask a security guard for the way to the main entrance if she gets lost—once she is outside, she can see Treasure Island again. At home, getting to walking places that are visually new and exciting involves Peter, the saint of transportation; the bus; or Uber. How I love the independence of getting around by myself for a few days, even if it is just crossing the walkway for a cup of coffee at the mall. 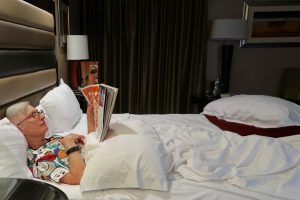 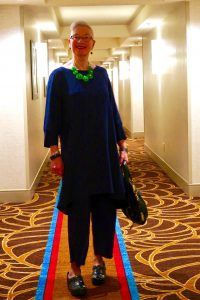 Who needs more fancy than this? My second-favorite thing to do in Vegas: read in bed any time of the day. My favorite? Going out on my own to walk wherever the elevated walkways take me! (Actually, none of this would be any fun without Peter. During the day, we meet up every few hours for coffee. At night, we have dinner and a long cozy evening together.) 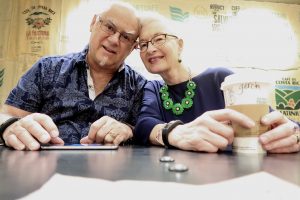 For the most part, Doña Quixote behaved herself well in Las Vegas. Mostly it was just her usual failings of forgetting where and when Peter and I agreed to meet, all of which were easily solved by a frantic phone call or two. One day, though, she pulled a trick that I still find hard to fathom. The story’s background is that I decided to buy relatively open summer shoes this year, after not having been able to wear anything but closed shoes after the car accident 25 years ago that shattered my heel-bone and afterward forced me to wear orthotics that only fit in closed shoes. Now that I walk a lot more in retirement, my foot is sometimes strong enough that I can forego the orthotics for a day or so. I have also started again wearing the three pairs of 1″-heels that I have acquired over the years for special occasions, including our children’s weddings. Accordingly, I started lusting after the beautiful a-bit-more-than-sandals shoes that have started appearing in the stores in the spring.

I blame Doña Quixote for that. She is loosening my life-long cling to doing sensible things. I picked up a shoe on display, thinking that buying it would be analogous to a smoker who quits for 25 years and then starts puffing again. Doña Quixote was unpersuaded. She was quoting Christian Louboutin at me. “I have no problem with the idea of comfort, but it is not an important thing aesthetically. A heel is not a pair of slippers and never will be.”

Gerda: Easy for you to say, it’s my foot that will be throbbing with pain at night.

Doña Quixote: You cry because your foot throbs in pain—I cry because I no longer feel any pain.

That did it. I succumbed to a pair of pinkish pewter-colored semi-sandals, with heels slightly higher than I had intended.

Now starts the real story of the trick Doña Quixote played on me: as soon as I’d paid for the shoes, the Doña suggested that they really would not look good with my standard black handbag. So, with one shoe in my hand to keep its color before my eyes, I started hunting for a light-colored handbag to go with it. I found one in a brand that had always seemed too reptilian to my taste, Brahmin. Even on sale it was very expensive. I hardly ever buy really expensive clothing items, but I thought the color match was great. (Also, the money I’m getting for my book is an unexpected bonus to our fixed retirement income, so I feel a bit freer to buy kinds of things I had never before been able to acquire.) 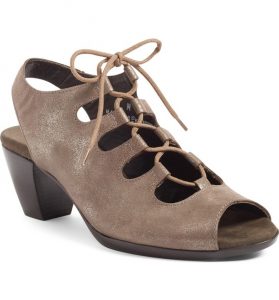 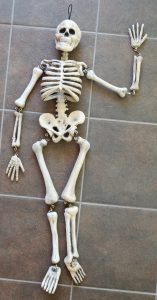 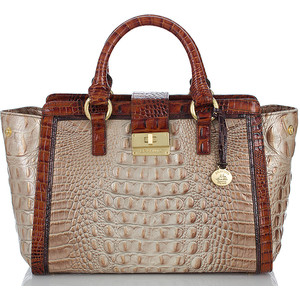 Back at the hotel, I tried on my loot. Peter was, as always, very enthusiastic and complimentary. But the more I posed and examined myself in the mirror, the wronger the handbag seemed. What does not show in the photo is that it is about the size of a small suitcase. When I remarked on it that it was “a little bit big,” Peter gave me an honest rather than supportive response: “It is massive.” His compliments on and admiration of the shoes never wavered, though.

I took the bag back. I was relieved. I had never really liked it. Why, then, did I buy it? I just did not want to wear my new shoes with my conventional black bag. Happy to have my project back, I kept looking for a light-colored bag. Every woman should have one in her closet, I imagined one of those snobby fashion magazines saying. I looked the whole day with no success. I was really disappointed. Now that I had the idea in my head that the shoes needed a light-colored bag, I did not want to wear them until I had one. I also wanted to test my judgment, which, it seems, had failed me by the choice of this bag that is really not in what I think of as “my style” at all. At the time of buying the Brahmin, it seems in retrospect, the only thing I though of was its color. None of the other features a wannabe stylish person might consider entered my head.

It was only the next morning, before I had even left the hotel, that the Doña played her trump card in unsettling of me through the handbag episode: an image popped into my head with the force of a revelation.

After having a light-colored bag on my mind over a period of two days, I SUDDENLY REMEMBERED THAT I DO HAVE ONE. I’ve had it for over a year. I’ve often worn it. A love and adore it. I bought it on the internet from a vintage shop in London with much fanfare. It is a 1950s piece, plastic, and see-through except for the greenish pewter parts. I had taken weeks to decide to buy it—it had been even more expensive than the Brahmin-on-sale. I’d had to save my pocket money for several months to afford it. Even so, while for two days I had nothing but a light-colored handbag on my mind, I HAD COMPLETELY FORGOTTEN THAT I HAD IT. I was shocked. It felt like a new kind of crazy. But I did not sulk for long. I looked forward to introducing my new shoes to my old bag, non-color-coordinated, but—in my way of thinking—still “talking to each other” in a pewter haze. As my 83-year-old neighbor, Barbara Olson’s granddaughter says, “Grandma, you must stop dressing so matchy-matchy.” 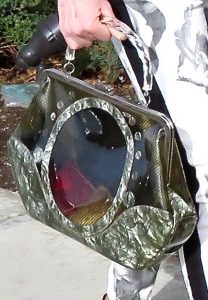 My light-colored vintage handbag, used in a “not so matchy-matchy” way.

This time our trip to Vegas was not just all play: since it is now only 12 weeks until my book comes out (June 13), Peter and I did some “work” too to support my publisher Hachette in its bountiful marketing efforts—we went to an extraordinary little independent book store to meet the owner and deliver advance copies of MEMORY’S LAST BREATH. I found the bookstore online—that is, after wading through false google hits like Best Race and Sports Book. The Writer’s Block is more than just a bookshop. Past the noun shirts, the children’s books, and behind the back of the store’s forest facade is a backroom brightened by white lights, with rows of wooden tables and chairs. The room is used to host free writing workshops, book signings, club meetings, school field trips, and other community-based events. 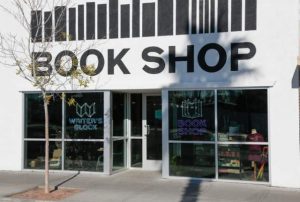 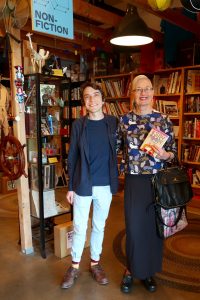 The Writer’s Block at 1020 Fremont Street, Las Vegas. Drew Cohen, one of the owners, with Gerda.

The Writer’s Block’s owners, Scott Seeley and Drew Cohen, hail from New York, where Seeley was one of the founders of an organization that supported free writing programs for students in Brooklyn. The program was set inside a superhero store, where the students used a secret door behind a bookcase to enter. In the early morning of the day when we visited, Drew was the only person there. He was very gracious when we introduced ourselves. When he heard that Hachette was my publisher and read some of the blurbs I’ve been getting, he was impressed enough to tell us he would be ordering some books. I am so honored that The Writer’s Block will carry my book, since—in an interview in the Las Vegas Review/Journal—Drew is quoted as saying about their inventory, “I think it’s about curation, it’s carrying titles that we can vouch for.” 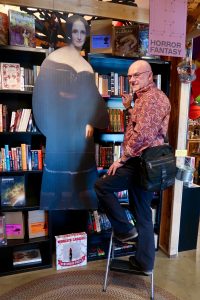 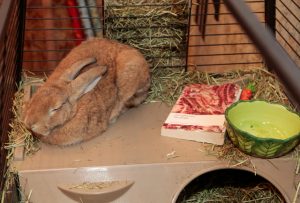 Peter poses next to one of the cardboard figures of literary characters that reside in the bookstore. The photo on the right (source: The Las Vegas Review/Journal) shows The Writer’s Block’s resident rabbit, The Baron, who hopped from the street into the store’s history one day and was immediately adopted by Scott and Drew. Customers can request to pet him: he loves having his ears rubbed. Aside from his daily dose of greens, he’s getting mental sustenance from the slab of meat on the cover of Upton Sinclair’s 1906 novel The Jungle (a fictional exploration of the harsh conditions and exploited lives of immigrants in the meatpacking industry in Chicago). What kind of cautionary tale might the presence of that book represent to The Baron?

The Writer’s Block will be a must-visit for me on any future trip to Las Vegas. I truly had great joy in visiting it. Besides, telling you about it feeds into my pretense that I am still yearning for intellectual stimulation as I traverse the blingy materialism of the city. Doña Quixote, however, knows better.