Three months ago, I received an e-mail invitation from craniosacral and longevity expert Michael Morgan to participate in an upcoming (October 20-24) online gathering, the Alzheimer’s World Summit. Michael would be the host. The purpose of the Summit was to bring together others like himself who had started to apply healing therapies that were developed outside of mainstream/conventional Western medicine toward preventing, slowing, or even possibly reversing the effects of Alzheimer’s and maybe other dementias. 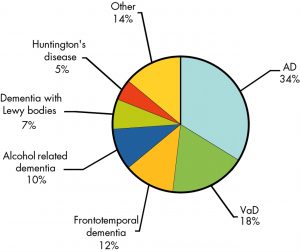 Alzheimer’s is the most frequently occurring form of dementia in the US and world (34%). Microvascular dementia, which I have, is the second most common (20%), followed by the other dementias depicted in the diagram (Journal of Neurology, Neurosurgery, and Psychiatry).

Given my lifelong die-hard adherence to the evidence-based model of Western science, my mind boomeranged through my long-held convictions that Western medicine is the only way to go with dementia of all stripes—and whatever other health conditions one has to deal with. I know that many of you who read my posts do not agree with me, because you have kindly and generously sent me accounts of positive experiences with one or the other alternative/complementary form of healing, which I then researched and mostly rejected. I followed up by responding to your suggestions with what I hoped was a nice e-mail 🙂 explaining what I had found out and why I thought it was something I did not want to try.

It’s not that I am not interested in other modes of knowledge: dating back to the pre-internet era, I voraciously read everything I could find by and about Hinduism and Buddhism; was aware of Hegel’s, Jung’s, and Heidegger’s incorporation ofTaoism in their thinking; devoured Krishnamurti; ate up Frijof Capra’s The Tao of Physics; loved the fact that the Greek mathematics of Euclid and Archimedes was preserved and built upon by Islamic/Arabic as well as Hindu/Indian scholars during the West’s dark Middle Ages—and so on.

Left: Ishaq ibn Hunayn’s Arabic Translation of Euclid’s Elements, AD 1270. Photograph: copyright the trustees of the Chester Beatty Library (Irish Times). Right: While Europe was in the dark ages, Indian mathematics transformed zero from a placeholder to a number in its own right (Madras Courier)

I also dipped into and had on occasion tried alternative/complementary health-promoting or healing methods, whether for my body or my mind. First, after I graduated from Pretoria University,  I learned yoga from a self-help book. Later when we lived in Johannesburg, I attended a yoga center in a beautiful, silent garden. I don’t attend classes any more—I can no longer interpret the instructor’s moves quickly enough to go along. Nevertheless, I still use certain asanas at home to perk up my digestive system or help me cope with back pain. Second, during the 1980s when I was in my early thirties, I learned transcendental meditation from South Africans who had themselves received TM teacher training from Maharishi Mahesh Yogi in India. I still practice meditation today, though I now seldom sit in the prescribed posture or use my mantra, but rather let my thoughts go peaceful as I walk by the river or sit at home focusing on a phrase that is meaningful to me. Third, when my primary-school aged daughter Marissa became very ill with asthma, we experimented with homeopathy. To our disappointment, her attacks continued. After they had landed her in hospital, we resolved that she would continue on traditional Western medications. And so she did, until her asthma virtually disappeared during her thirties. Lastly, I tried acupuncture for a cough that was then thought to have been triggered by my asthma. Unfortunately I did not experience relief through this method.

Despite my general distrust of modes of knowing for which no science-based evidence can be found, I also really do not want to be a knowledge snob! I have always loved and known people who have completely different world views than I do. Besides, especially in these times of our horrible national rift between groups with different understandings of the world, I feel that it is very important to mingle with and learn from people who think differently than I do. In addition, it’s an important part of my self-image to at least appear open-minded 🙂 Accordingly, I arranged a zoom discussion with Michael to hear more about the conference.

During our conversation, I learned that Michael had taken care of both his step-mother and then his sister-in-law who had Alzheimer’s. “It is not only the person with Alzheimer’s who is affected by the awful symptoms of the disease,” he said. “It affects the physical and mental health of everyone in the family who help to take care of them.”  As we carried on talking, it felt like we were two travelers, by happenstance seated side-by-side in a plane, swapping tales about our separate journeys that traversed various challenging territories at different times and in different ways, with each of us all the while trying to create our own map.

For the Summit, Michael selected, invited, and interviewed 30 speakers whose work in one way another center on Alzheimer’s/other dementias: among them, speakers who have dementia, those who care for them, a four-time USA Memory Champion, and many career practitioners of holistic and complementary methods that could potentially intervene in the disease process as well as provide support for caretakers who daily experience the sadness, anxiety, loneliness, and exhaustion—even total burnout—that inevitably befalls those dealing with a loved one’s dementia.

Michael’s career started out with a BA degree from UC Berkeley in Physics and Philosophy, two classical disciplines based on Western modes of knowledge. For graduate work, though, he pursued his interest in modes of knowing that were developed outside of mainstream/conventional Western frameworks: he enrolled in an MA program in Interdisciplinary Studies at the Maharishi International University in Fairfield, Iowa. It struck me that, like Michael, I was not unfamiliar with either Physics or Philosopy—the first constituted a minor in my Math and Chemistry bachelor’s, the second resulted from a life-long deep-reading hobby plus two university Philosophy courses while I was gearing up for my PhD in English; neither was I unfamiliar with Iowa or Maharishi Mahesh Yogi—the first came when I was a 16-year-old exchange student (from South Africa) doing her senior year in high school at Carroll High in Iowa (1967) and the second during the 1980s when, as I told above, I learned TM from teachers trained by Maharishi Mahesh Yogi.

During his MA studies and after graduation, Michael set out on a career focused on mind and body work, that is, a group of alternative/complementary therapies that enhance the mind’s interactions with bodily function to induce relaxation and to improve overall health and well-being. These therapies include CranioSacral Therapy (CST), which was developed by osteopathic physician  Dr John E. Upledger from 1975 to 1983 at Michigan State University, where he served as a clinical researcher and Professor of Biomechanics. In 1985, he established Upledger Institute in Palm Beach Gardens, Florida.  That is where Michael subsequently trained to become a CranioSacral Therapist and eventually became an instructor—a position he has held for over a dozen years by now.

The osteopathic origins of craniosacral therapy led me to another family connection to alternative/complementary healing: when my husband Peter was 14 years old, a car coming out of a driveway drove into him as he was biking home from high school in Pretoria, South Africa. He was thrown through the air and serendipitously landed at the feet of a doctor standing nearby. Unfortunately he was severely concussed and was only able to give a garbled mix of his recent and current addresses before he fell into a three-day coma. His parents were only able to track him down after more than 12 hours of frantic searching. One problem was that when they enquired from the police and hospitals about a 14-year old boy who had not come home, the persons answering the phone said they were not aware of any teenager in an accident. After much probing, his parents explained that, despite his young age, he had a very dark beard, which would by then have grown into a formidable 5 o’ clock shadow. This description immediately led them to the right hospital, where they waited out the remaining days of his coma. He fortunately came to with an apparently fully functioning brain, but without his front teeth.

Peter at 15 with his new front teeth

While he was recovering—and his teeth were being fixed!—he was treated by a Pretoria osteopath, Dr. Ober. Given that this happened in the early 1960s before sacroranial therapy was developed, the form of treatment consisting of Dr. Ober holding him lightly by the head while she gently manipulated his head and neck could not officially have been sacrocranial therapy. According to Peter, it had a pleasant and calming effect similar to a contemporary sacrocranial session described by Paul Ingraham, former assistant editor of ScienceBasedMedicine.org, now science writer and alternative/complementary treatment skeptic: “It is truly, deeply comforting to have your head held and gently manipulated for a long time by a craniosacral therapist with the best intentions to provide a soothing experience. Receiving craniosacral therapy is one of the most pleasant, sleepy experiences I have ever had on any massage table.”

Despite the pleasant nature of his experience with his craniosacral session, Ingraham still faults the therapy for lacking “well-designed studies evaluating the efficacy of [this] technique in peer-reviewed literature.” Nevertheless, he acknowledges that “subtle effects of the manual therapy probably do exist—just because it can’t be measured doesn’t mean it isn’t there.” He does not question the actual positive effects of craniosacral therapy, but rather the explanation practitioners give for it, namely “that the tiny manipulations of CST affect the pressure and circulation of cerebrospinal fluid, the fluid that surrounds and cushions the brain and spinal cord.” Instead, he proposes that “primate sensory neurology” might be responsible for the positive effect of the therapy rather than practitioners’ explanation.

Ingraham cites Autonomous sensory meridian response (ASMR)as an instance of primate sensory neurology that might offer an explanation. ASMR, Ingraham explains, “is a flush of euphoria and tingling around the head and neck. It’s triggered by things like attentiveness, a soft voice, quiet and repetitive actions, and interesting and gentle tactile stimulation (especially around the head). ASMR isn’t well understood, but it’s probably a sensory reward for grooming behaviour (in the same way that orgasms are an evolutionary incentive to reproduce. A [sacrocranial therapy session] seems like a perfect ASMR-generating ritual, a grooming simulation fine-tuned to produce ASMR.” While the “brain tingles” that occur during ASMR have been observed via brain imaging demonstrates that such  a phenomenon actually happens, its correlation with scraniosacral therapy of course also still lacks “well-designed studies evaluating the efficacy of [this interrelation] in peer-reviewed literature.”

“The Price of Love”: Doña Quixote traps Gerda in apathy, Peter stages an intervention What do Rafal Olbinski’s surrealist visual puns have to do with the FREE “Alzheimer’s World Summit”?