My interview on Blacksite: who knew my book would catch the eye of an outré Utah podcast run by narly, “sensitive” millennials?

This is what the Blacksite web page invites its audience to do: “Bring your bug-out-bag and join us – it’s a brave new Trump-world and we’re here to talk about our sensitive millennial feelings, interview politicos, and organize some liberal uprisings!! Mwahaha!” 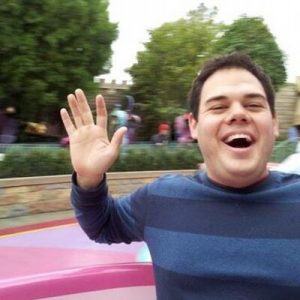 Who would not want to talk with Dan Strong of Blacksite Podcast, Utah’s “source for politics, pop culture, and inane banter?”

I’m sorry that I only discovered Utah’s only liberal podcast–make that “only liberal broadcast of any stripe”–when they invited me to be interviewed. Now that I know a bit more about them, I hasten to add that they take great care to represent the various voices in our state by, for example, interviewing as many political candidates as were willing to appear on their show; in Utah, that means they’ve hosted many Republicans and other conservatives.

I am thrilled and honored that such a happenin’ show–run by a bunch of smart millennials–felt my book might have something to bring to their narly audience. (FYI, I googled “narly” on Urban Dictionary and it does not mean “cool” (though they and their audience are cool, by my Baby Boomer vocabulary)–instead, it means “insane and difficult.” For an explanation of Blacksite’s narly mission, check out their About page. 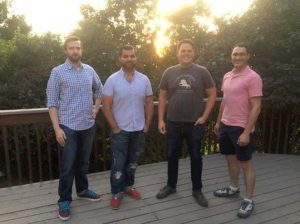 Some of Blacksite’s regulars: from left, (not sure of first guy’s name–Clark?), Yossof, Dan, Kim.

The best thing about going to the Blacksite recording studio in “a secret location on the international waters of the Great Salt Lake,” was that, after my interview was recorded, I got to meet some of the regular panelists on the show: Courtney James, Clark (can’t remember his last name) and two special guests, Kim Bowman (a liberal) and Yossof Sharifi (libertarian/conservative). To hear them in action, listen to A War with the Free Press, Light-Colored Shirts, and Other Threats to America, with guests Yossof Sharifi and Kim Bowman!

The minute Kim Bowman introduced himself, I recognized him as a former student. He reminded me that he took a writing class from me and told me it was 12 years ago, during his senior year, when he finalized his bachelor’s in gender studies and political science at the University of Utah. In the dozen years since, he has fit in huge chunks of life that would take most people decades to add to their resume. 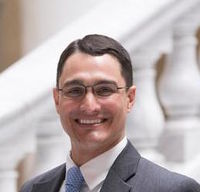 Kim is the kind of adult citizen who thrills the heart of a former teacher: in addition to his bachelor’s, he holds a master of business administration from Westminster College, a juris doctor from University of the Pacific, and a master of arts in gerontology from the University of Southern California. Bowman is a U.S. Air Force Reserve captain and a member of the Air Force Judge Advocate General’s Corp (JAG). He is currently the manager of the Division of Health System Innovation and Research at the University of Utah School of Medicine. In the meantime he met and married the love of his life, Nadia, who is also an attorney; the couple met in law school.

I really enjoyed my interview with Dan. He had thoroughly read my book and came up with fabulous questions. I also loved his knowledge of literature: at some point in the interview, he made an analogy that involved Homer’s Odyssey. Anyone who sails Homer’s “wine-dark sea” often enough to be able to instantly draw examples from one of the West’s foundational texts, is my kind of discussant.

This is what Dan said on the website about his and my discussion of my book: “We think you’ll get a lot out of our new episode featuring Gerda Saunders, author of MEMORY’S LAST BREATH: FIELD NOTES ON MY DEMENTIA. Gerda talks about her dementia diagnosis, her experience with the American healthcare system, and how she is preparing to face the end of her life.” 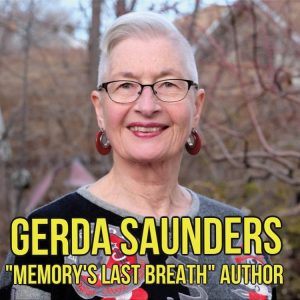 To listen to the interview, go to Blacksite Podcast.  You’ll see a list of interviews, find mine and follow the instructions.  I am terrified of any technology involving an “app,” but even I managed it on my first try.

Doña Quixote wants to know: who am I making these memories for? My interview with Maria Shriver on NBC’s Today Show is now available online