Some weeks ago I received an invitation from Bob Goldberg, Director of the Tanner Humanities Center at the University of Utah and History professor, to do a reading and Q & A on campus in relation to Memory’s Last Breath: Field Notes on My Dementia. My history with the Tanner Center goes back over 20 years. Toward the end of my coursework for my English PhD at the University of Utah, during the1995-96 academic year, I was lucky enough to receive a graduate research fellowship at the Tanner Humanities Center on campus at the U to continue my research and writing for my (still incomplete) novel about Michelangelo’s sexuality, Last Pieta—the gift of a whole year of grad school without me having to teach. 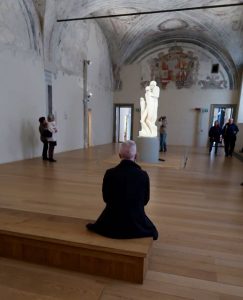 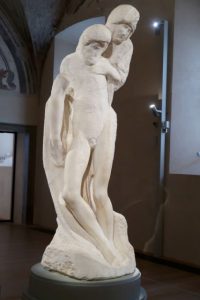 During my and Peter’s trip to Milan last year, I saw the subject of my novel, the Rondanini Pieta, for the first time. Michelangelo still worked on this pieta only days before his death. Last Pieta is the book I thought I would work on in my retirement. Because of my short-term memory loss, I have so far found it impossible to keep its 300 pages in my head as a whole in order to complete it.

Some of the reasearch I did while at the Tanner was in relation to Michelangelo’s death, the event where my book ends. Thinking of my own eventual death,  I often thought that being productive until almost the end of one’s days must be the best way to exit life. The premature death of my mind was not something I had thought much about. My mother had not yet suffered the serious cognitive breakdown upon which our family now looks back as the start of her dementia. Her death, preceded by a handful of stressfull years during which she was not able to pursue her former interests, was still a decade in the future. 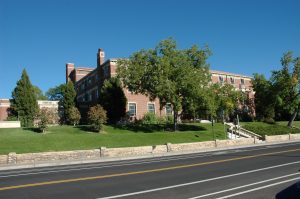 Carlson Hall during my time as a fellow at the Tanner Humanities Center.

During the time of my fellowship, the Tanner Center was still housed in Carlson Hall. The building was completed in the late summer of 1938. It was the first residence hall on the University of Utah campus, and one of the first in the western United States to be built for women. Carlson Hall served generations of women students, but the wave of new students on campus after World War II meant that other housing for students, both men and women, had to be found. After other residence halls were built on campus, Carlson Hall was converted to offices and classrooms in 1971. By the time I was assigned an office there, the building was on its last legs, already slated to be demolished as soon as new premises could be found for the Tanner Center, the History Department, and other groups that used its office space. In hindsight, it would be easy to commit the pathetic fallacy, a literary term for the attribution of human emotion and conduct to nature and material objects, by claiming that the fate of Last Pieta was connected to that of the crumbling building in which a huge part of it was conceived! Unlike Carlson Hall and my brain, though, the Tanner Center has moved on to new premises and new strengths. 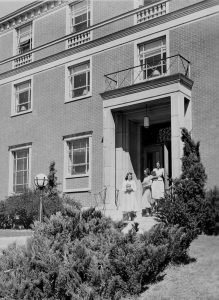 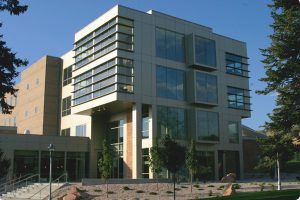 Left, Carlson Hall when it was new in 1938. From 1988 onward it would house the Tanner Center for a decade. Right, in 2008, the Tanner Center moved to its new premises in the Carolyn Tanner Irish Humanities Building.

Despite the still unfinished state of my magnum opus, I look back at my year in the Tanner Center as having had enormous importance in my life—Last Pieta was my first book-length work and it really taught me to write. Even though, by the time I retired, my brain could no longer handle the book’s 300-something  pages and convoluted plot, enough of my story-telling skills remained that I was able to write the disconnected series of essays on my dementia that, with much help from Shen Christenson and Kirstin Scott as well as my agent Kate Garrick and Hachette senior editor Paul Whitlatch, has now become my memoir Memory’s last Breath: Field Notes on My Dementia.

In addition to the blissful daytime hours of research and writing, I received the bonus of an exceptional office mate: my fellow fellow Susan Anderson. The year when Susan and I shared an office fell in a difficult time of my life when Peter was commuting to Nevada for almost three years for his job of transforming that state’s worker’s compensation system from paper to electronics. He was gone for the work week and home only on weekends. Marissa had just left home for her own apartment and Newton was in high school and the only family member living at home with me during the week. It was so lovely to have a friend in Susan, single at the time, with whom I could go to grad student events and who could come to our house to share a meal with Newton and me. Sometimes she and I hung out together to study and, particularly in winter, she would stay for a “sleepover” to avoid the snowy roads. She and her family still today count as precious members of our made-in America family.

My return to the Tanner Center to read from and answer questions about Memory’s Last Breath is to me a matter of nostalgia, both the happy and melancholic kinds. Should you be free on the afternoon of Thursday Sept 7 at 3 pm, it would be lovely to see you there.

When science and holiness became one: a reminiscence on today’s eclipse, ending with an excerpt from “Blessings on the Sheep Dog” Sartorial troubles: keeping Doña Quixote dressed in the manner to which Gerda is accustomed

Gerda is having a live talk with “Being Patient Alzheimer’s” TODAY April 23 at 7 p.m. EST/5 p.m. Mountain Time/4 p.m. PST on their Facebook page.

Says Sissy Spacek, “I read a book called Memory’s Last Breath”—part of her research for Castle Rock’s “The Queen”