What a day, what a film crew, what a woman!

Yes, yesterday Maria Shriver came to visit the Sugarhood Neighborhood (as our not-so-upscale part of Sugarhouse near State Street is fondly called). There she was across from me in our back garden: the Peabody- and Emmy Award-winning journalist; six-time New York Times best-selling author; NBC News special anchor; and lifelong advocate for people with intellectual disabilities, both as a board member of  Best Buddies that pairs mentors with people with intellectual disabilities and as a supporter of  the Special Olympics, which was established by her mother Eunice Kennedy Shriver in 1968. In addition, she is the founder of A Woman’s Nation, a non-profit organization focused on the needs and wellbeing of women. A Woman’s Nation recently put its clout and community behind a project to fund gender-based Alzheimer’s research: why do two-thirds of the brains affected by Alzheimer’s belong to women? The project is known as the Women’s Alzheimer’s Challenge. Her advocacy of people with Alzheimer’s dates back to the diagnosis of her father, Sargent Shriver, with the disease in 2003. As part of her work raising awareness and funding for Alzheimer care and research, Maria—as executive producer—helped bring the HBO documentary The Alzheimer’s Project to television in May 2009 and the Academy Award-winning film Still Alice to the big screen in 2014. 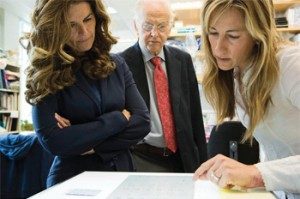 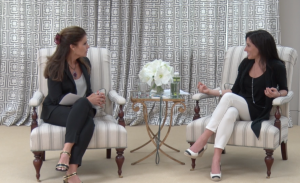 Today Show producer Robert Powell arrived on Wednesday, a day before Maria Shriver, to shoot b-roll, or background film. By then the Salt Lake City Saunderses had executed a huge team effort to over the weekend to get the house back together again after the painting. Newton and Cheryl and kids, as well as Marissa and Adam and kid, came over numerous times to help move the storage boxes back from the garage and re-hang all the pictures in the house. While a few boxes still remain in the garage, our house looked respectable and pleasantly minimalistic, especially after our beloved and life-saving Reyna came to clean. The garden, too, came together nicely—bless next-door-neighbor Stephanie’s yellow and red roses for starting to bloom a few days before the shoot! 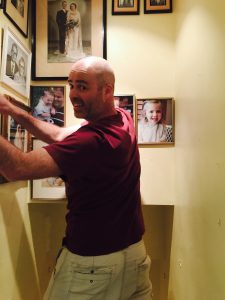 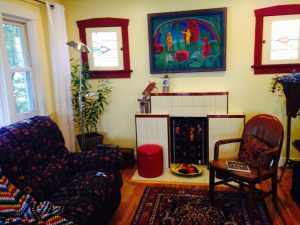 Newton re-hanging our stairwell pictures.Our living room restored to its flamboyant color: yes, the paint colors are essentially the same as before. But the new paint is clean and fresh and makes me very happy.

After arriving at midday on Wednesday, Robert Powell followed me and Peter around with his camera as we went about our daily activities. Robert was so considerate and caring, that I soon forgot I was on camera. Peter and I gave him a tour of our house and showed the checklists I have put up on mirrors and by the outside doors to make sure I leave the house properly dressed, and so on. He then filmed me working in the garden—fortunately I still had one plant left that I had not had time to plant. (Although about thirty other plants, groundcovers, tomatoes, etc., did get planted during my summer refurbishing of the garden—before we even knew about the Today Show.) 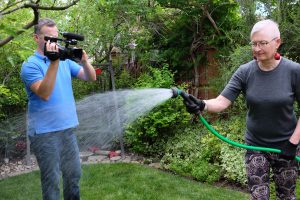 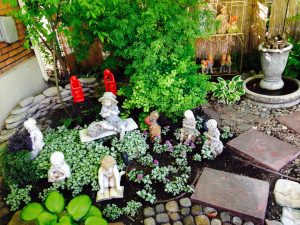 Left, Robert films me watering the back garden. Right, I think that my kitsch corner with the representations of all the Salt Lake City Saunderses did not make it into the film—but I may be proven wrong!

Robert’s filming included our daily a trip to Starbucks for our afternoon  coffee. We know all the baristas, the manager, and a number of regular customers and are always greeted with enthusiasm and cheer when we come in. We had told them all that the Today Show was coming to Salt Lake City to film us, and the manager, Mike, got permission from their corporate management for them to film in the coffee shop. Robert did not get our original arrival and hugging and greeting of the baristas on film to his satisfaction, so that—as has so far happened in all of the various filmings in which I have participated over the last two years—we had to do the greeting again. Everyone was game and Peter and I stocked up on a nice stash of hugs!

Late afternoon, our kids and grandchildren came over, bringing dinner. Robert filmed us getting the table set—the grandkids helped fold napkins and put out the silverware. As usual we did a little ceremony—an “open-eyed prayer,” as Brenda Hofmeyr calls it—and this time the three grandkids were in charge. Kanye and Aliya read alternate stanzas from Dr. Seuss’s Oh, the Places You’ll Go! and Dante read the chorus line:
You have brains in your head.
You have feet in your shoes.
You can steer yourself
any direction you choose.
…

Out there things can happen
and frequently do
to people as brainy
and footsy as you. 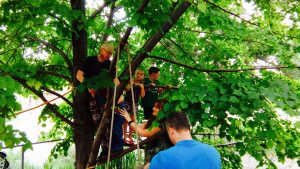 After dinner, the grandkids played on the swing and climbed the trees in our front yard. Since Ouma was the one who taught them how to climb our trees, I of course had to participate. (Confession: Peter had to help me get my butt up there…) From the left, Ouma, Dante (his head is behind the branch), Aliya, Kanye, Marissa spotting Dante, and Robert filming.

On Thursday morning at 9:30 am, Robert and the rest of the film crew arrived at our house to set up the cameras for our family’s interview with Maria Shriver in the afternoon. 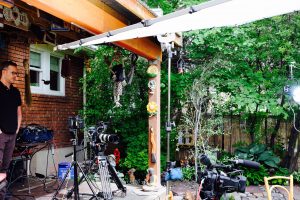 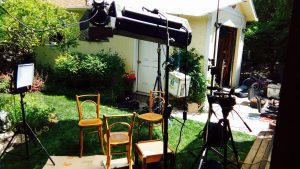 Left, Robert Powell, Today Show producer, scrutinizes the set-up for Maria Shriver’s interview with Gerda and Peter from the back stoep. Right, The interview area in our garden: we sat on the bentwood chairs that we brought with us from South Africa 33 years ago. Below, left: Paul and Dennis, videographer A-team, set up the cameras. Right, more camera equipment than you could ever imagine. Paul, who brought the equipment, lives in Salt Lake City. Dennis flew in from Colorado. 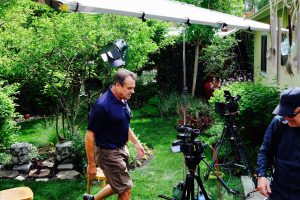 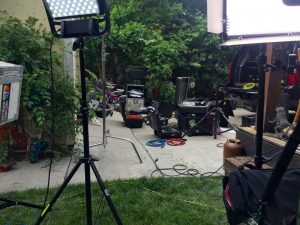 About half-hour before Maria Shriver was about to arrive, I went downstairs to put on my interview outfit: a loose-fitting periwinkle blue suit. I had set it aside where I could find it even before we started packing up the house for the painting. The night before, I had hung it on the outside of my closet, with my shoes, jewelry, everything nearby. When I finally started getting dressed, I had a total shock: on the front of the suit, at about necklace height, was a 2-inch diameter spot. I couldn’t believe I had not seen it before, but there it was. I ran outside to find Robert, who had earlier okayed the outfit for light/camera purposes, and showed him the spot. He agreed that I would have to wear something else, and we decided to go with a black dress. The only problem was that I had no idea where the dress was—except that it was in one of the boxes I had not yet had time to unpack. I went flailing into the garage, frantically pulling clothes out of boxes. But no dress. Back into the house, looked through all my closet space, checked another unpacked box in the furnace room—no dress. By this time I was frantic. I shouted for Peter to come help me look, but he was nowhere to be found. I was about to have a meltdown when he suddenly appeared, displaying the area with the spot on my periwinkle top.

It was gone! While I had run around madly looking for the alternative dress, he had gone to our dry-cleaners three blocks away and begged them to work on the spot. A fabulous lady named Tara managed to remove it, press the top, and here it was back in my hands, ready to wear. Peter is undoubtedly the hero of the day! 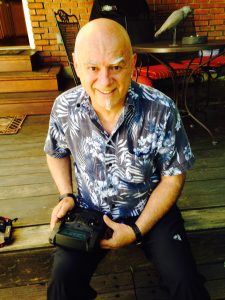 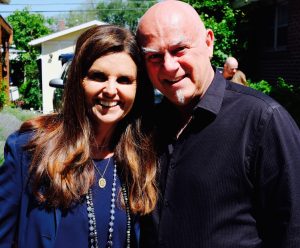 Left, Peter was the hero of the day by making the spot on my dress disappear. In this photo, the day after, he relaxes on the back stoep, getting ready to fly his drone. Right, Even though Maria Shriver does not know the story of my dress-panic, she seems to have thought he is cute too! 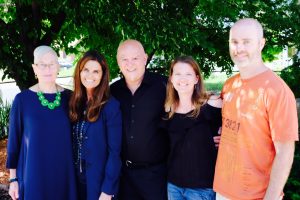 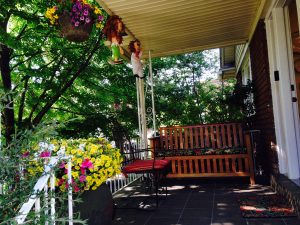 Left, Newton and Cheryl pose with Maria Shriver. (Unfortunately the opportunity for this photo came after Marissa and Adam had already returned to their jobs.) Photo credit: Robert Powell. Right, Our front stoep, right next to where the photo on the left was taken.

Every other member of my family, too, totally had my back. I am so grateful and blessed that Marissa and Adam, Newton and Cheryl, and the grandkids, were totally there for me and Peter, everyone happy and friendly and willing to do whatever was needed to make the best of this great opportunity for introducing my book to a huge audience (4.5 million viewers). Now that the shoot is “in the can,” Peter and I are getting caught up on rest and relaxation. I, particularly, was pretty lights-out after the visit was over. The day after, Friday, I could do nothing right–got lost in the mall several times when I went there for a “relaxing” walk. After I slept almost all day Saturday, though, things are much better. I was even able to write this! And enjoy our freshly painted house and tidy garden. 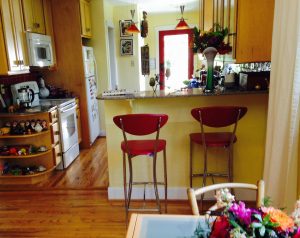 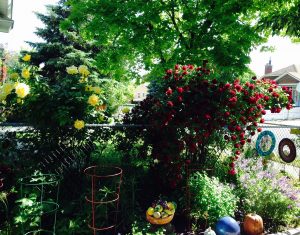 I’LL POST THE AIR DATE ON MY WEBSITE AS SOON AS I HAVE IT. I’LL ALSO POST A LINK FOR THOSE OF YOU WHO WON’T BE ABLE TO WATCH THE BROADCAST ON AIR.