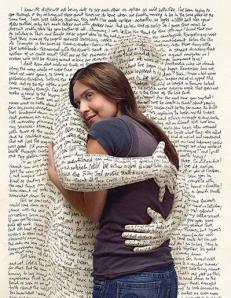 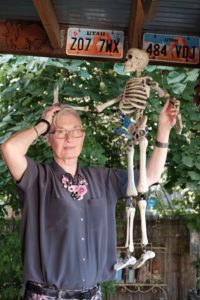 Even though she really mostly stuck to home during out trip, now that we’re back Doña Quixote wonders what is it about a common love for books that engenders such instant closeness. The topic of my book, too, of course leads to the telling of life stories, often those of loved ones with dementia. Some of us teared up and even wept a little bit–and that goes for Peter and me too. 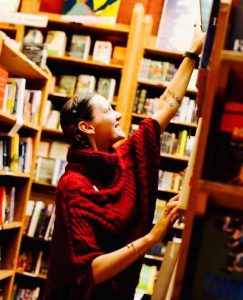 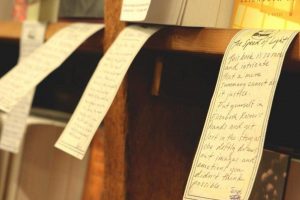 Even before our trip, I was touched by what I read about the people at each of the bookstores. Take an interview by Literary Hub with various people who work at the Elliot Bay Book Company: One of the people interviewed (whom I regrettably did note meet during my visit) was Justus Joseph, manager, sideline buyer, and “resident Canuck.” She was asked what she would add to the store if she had infinite space.  “Each staff member would have an entire shelf to feature their staff picks/ideal shelf,” she replied. “We would have a writing room and an introvert’s lounge for silent reading with wide windows and a spectacular view. We would have a champagne bar with a fireplace, cozy reading chairs and a game space for trying out some of the brilliant board and card games we carry. On the roof, we would have a garden reading area. Our children’s castle would be big, with rooms to explore and secret passageways. We would have a roller derby rink.”

Wouldn’t you love to have someone with that kind of off-the-shelf imagination help you find the perfect book? 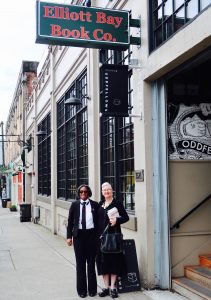 Gerda and our driver, Cheri, at the new Elliot Bay Book Company store in the Capitol Hill area.

Even without Justus’s dream features, Elliot Bay is a book lover’s dream store: high ceilings, wooden bookshelves, time-worn (but beautifully restored) wood floors, cozy book nooks and little balconies, and handwritten book reviews. Coming through the front door is like going into a creaky wood-and-brick tree house with cozy book nooks and little balconies, and plank-ladder stairs. To crown it all, the staff write and display handwritten book reviews. For kids, there is a “castle area” with regular story times. A cafe tucked in the back, Little Oddfellows, has goat cheese fritters, flatbread, and avokado toast among their menu items—a little something to enhance your everlasting coffee. 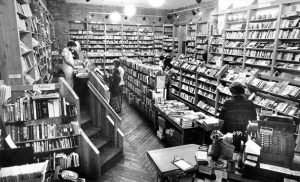 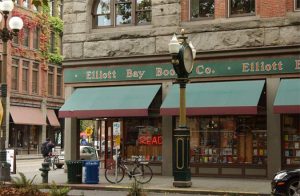 Elliott Bay Book Co. back when it was a one-room shop in Pioneer Square (Mary Ann Gwinn, The Seattle Times, June 24, 2013). The exterior of the original Elliot Bay store in Pioneer Square, Seattle. (Photo)

Elliot Bay Book Company was started in 1973 by Walter Carr. The original store was located in the City’s historic Pioneer Square. To refurbish the existing building, Carr hired laid-off Boeing workers to help build the shelves in the store. During this construction period, while Carr was working in the alley late one night, he encountered a young busboy from the restaurant next door. Rick Simonson was 18 and asked Walter about his venture. Impressed by his enthusiasm, Carr hired Simonson to help with the construction. While still in college, Simonson took on roles from clerking to stocking to managing. Today he is Elliott Bay’s head buyer and readings coordinator. In  1999 Carr sold the store to the current owner, Peter Aaron, who had fallen in love with the place more than a decade earlier. When the demographics around Pioneer Square shifted about 7 years ago, Aaron engineered Elliot Bay’s move to 10th Avenue in the Capitol Hill neighborhood. Some of new store’s display tables hail from Das Gasthaus, the the restaurant where Simonson was a busboy. 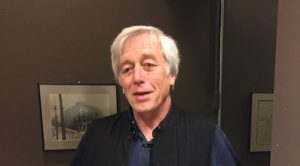 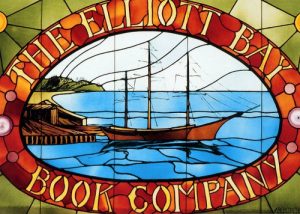 Like the previous and current owners, the people who work at the store can be described as besotted with books. Peter and I had the great pleasure of meeting Karen Maeda Allman, Elliot Bay’s Community Relations and Events Coordinator. Like everyone else at the store-—”except for the bookkeeper”—Karen also sells books. She has been with Elliot Bay for 17 years. She used to be a nurse—in fact, she moved to Seattle from Phoenix to get a PhD in nursing. Along the way she became disillusioned with healthcare. Drawn to the bookstore business, she applied for a job at Elliot Bay. The rest, as we feminists say, is herstory: earlier this year, Karen received a “Literary Champion” award from  Seattle Arts & Lectures, an organization dedicated to promoting and supporting the literary arts by “engaging and inspiring readers and writers of all generations in the greater Puget Sound region.”

Doña Quixote : Who can out-champion a woman who has even had a dance troupe perform at the store? 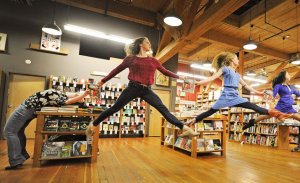 After meeting Peter and me at the store’s front desk, Karen shepherded us to Little Oddfellows, the cafe at the back of store. There we were joined by Holly Meyers, book buyer as well as head of the children’s department at the company. Before the last sip of our favorite beverages, Peter and I wished they were neighbors so we could pop in frequently for some more honest conversation. 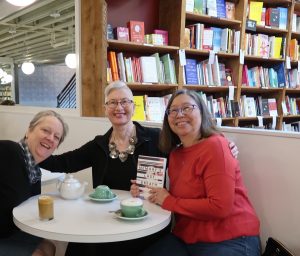 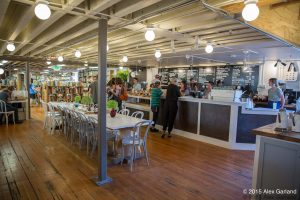 Holly Myers, Gerda, and Karen Maeda Allman at Little Oddfellows, the cafe at the back of Elliot Bay (photo: Alex Garland for CHS). The whole store has wood floors dating back to the building’s days as a Ford Motor Company showroom.

I very much regret the fact that Peter and I were unable to stay in that wondrous space for many an hour because of other appointments. Maybe we’ll be back one day? Whether we return or not, for me our time together at Elliot Bay Book Company will always be a special memory.

Thanks so much for your stories, Karen and Holly.