This morning Paul Whitlatch, my editor at Hachette Books, sent me this photo of my book’s poster in the Hachette booth at the BookExpo America (BEA): Michelle Aielli, Associate Publisher (sitting) and Joanna Pinsker, Publicity Director (standing).

Peter and I are continuously astonished and grateful at the enormous work Hachette Books is doing to make my book known to bookstores, libraries, and other book pushers in the trade. And now BEA—the largest annual book trade fair in the US, usually held in a big American city over four days spanning end of May/beginning of June.  Nearly all significant book publishers in the United States, and many from abroad—600+—have booths and exhibits at BEA, and use the fair as an opportunity to showcase upcoming titles, sell current books, socialize with colleagues from other publishing houses, and sell and buy subsidiary rights and international rights (although not on the scale of the rights negotiation that occurs at the Frankfurt Book Fair in October). Authors, librarians, and buyers for book retailers also attend the event. 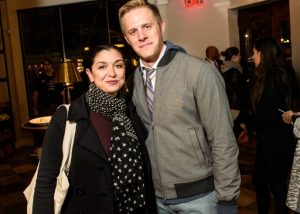 Thanks, Hachette, for believing in my book from the start!