So who is Michael Gazzaniga?

Here is the short answer:

More than fifty years ago, Michael Gazzaniga set out on a discovery that underlies all of contemporary neuroscience: that the right- and left hemispheres of the brain can act independently from one another and have different strengths. As a result of the foundational nature of his work on split-brain patients, i.e., people who have had the two halves of the brain separated to relieve severe epileptic seizures—he is is often referred to as the father of cognitive neuroscience. His writing is renowned for its wit and accessibility, as well as its scientific elegance, and has inspired some of the most important minds in the field including Steven Pinker, Oliver Sacks, and V.S. Ramachandran. Today Dr. Michael Gazzaniga is the Director of the SAGE Center for the Study of Mind at the University of California, Santa Barbara, president of the Cognitive Neuroscience Institute, and author of books including Tales from Both Sides of the Brain: A Life in Neuroscience. 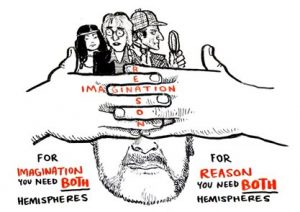 Here is the long answer:

(If you already familiar with Gazzaniga’s work, you may want to skip the “long answer” below and scroll to the end of the post to watch a video that shows some of his experiments.)

Michael Gazzaniga is the neuroscientist responsible for concepts and vocabulary related to the brain that you have probably used yourself, that is, if you have ever characterized yourself as left-or right-brained. If you have told someone, “I am left-brained,” the people would know you mean “I am logical and good at math,” whereas if you said, “I am right-brained,” the person would know you mean “I am artistic and creative.” Whereas Michael Gazzaniga would be the first to tell you that this popular way of using his concept is an oversimplification, he does not dispute that fact that our brains are functionally lateralized in the way suggested by the popular vocabulary and indicated by the diagram: 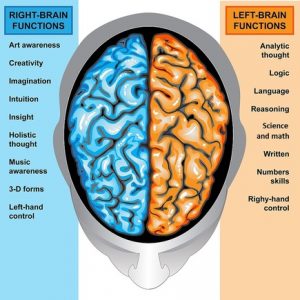 Basic characteristics of the right- and left brain

Together with his mentor Roger Sperry, Gazzaniga studied so-called split-brain patients, i.e., people who have had the two halves of the brain separated to relieve severe epileptic seizures. The separation is effected through surgery known as a corpus callosotomy, the severing of a large part of the corpus callosum, or the broad band of nerve fibers that join the two hemispheres of the brain. When Gazzaniga started his research in the 1960s, corpus callosotomy was just about the only way people with severe epilepsy could find relief. The surgery was never done widely, and is today used only in extreme cases that do not respond to medications that have been developed in the intervening decades. Accordingly, most of the split-brain research derives from fewer than 20 patients, of which the first ten participated in Gazzaniga’s five-decade-long longitudinal study, which still continues today with the handful of surviving patients. 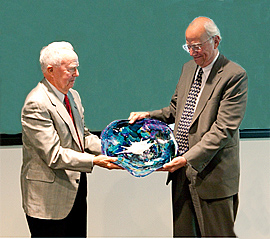 Before I let Gazzaniga himself explain his findings in a video interview with Alan Alda, here is a refresher of high school biology and some info about Gazzaniga’s methodology that will help you follow the astounding demonstrations of left- and right brain functions in the video. 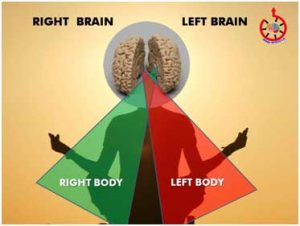 Our right and left hemispheres control the muscles on the  ‘opposite’ side of our bodies.

When it comes to vision, though, matters get more complicated than for muscle movement. To understand how the eyes and brain work for seeing rather than winking, let’s first look at the visual cortex, or the part of the brain where visual information is processed. (If the image is too small for you to see the detail, click here to go to the source.) 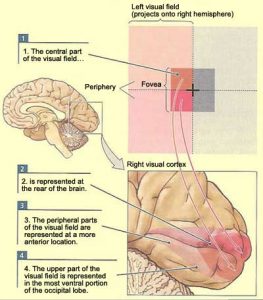 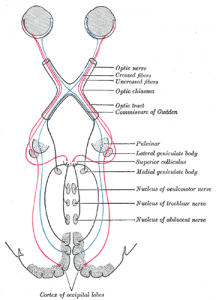 The fact that our eyes each sends visual information to BOTH hemispheres is known as binocular vision: since each eye receives a slightly different image than the other, we have depth perception, that is, we are able to judge the relative distances to objects in our visual field. The visual field is the entire area that can be seen when the eyes are directed forward focused on a mark in the center of a screen, shown in the diagram below as the point at which the red and blue lines on the left of the diagram meet. Because of the optic chiasma, the information coming into each eye from its visual field goes to each of the two hemispheres.

One more piece of info you need to enjoy the video to its fullest: Gazzaniga’s methodology consists of asking participants—who are, in addition to split-brain patients, also college students or retired adults—to look at the center of the screen. They then display words (or pictures, or other types of stimuli) fairly rapidly – so people can’t move their eyes fast enough to fixate them directly – to the left or the right side of a computer screen. By comparing how people respond (for example, whether they can accurately remember a word) when it was processed first by the left hemisphere versus by the right hemisphere, they can test ideas about what each hemisphere is capable of and whether one hemisphere has better, or different, abilities compared to the other. 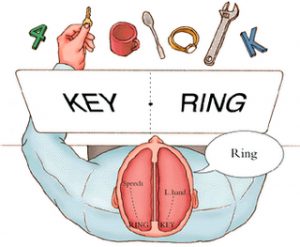 Now for your treat after concentrating so hard for a few minutes! Here is the video. 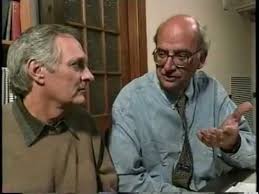 Now that you know more about Michael Gazzaniga, here is what he said about MEMORY’S LAST BREATH: FIELD NOTES ON MY DEMENTIA:

“The abrupt loss of everyday memory due to brain injury is swiftly and seriously unsettling. Its slower, subtle decline, the hallmark of dementia, provides time for introspection on its troubling trajectory. Gerda Saunders has given us a window into that chilling, yet poignant psychological reality. Memory’s Last Breath is personal, lucid and inspiring.”

–Dr. Michael Gazzaniga, Director of the SAGE Center for the Study of Mind at the University of California, Santa Barbara, and author of Tales from Both Sides of the Brain: A Life in Neuroscience.

Dementia Vacation Blessed be the caregivers of us the elderly, particularly us dementers!