In Disney’s 2003 blockbuster film Finding Nemo, one of the main characters—a memory-impaired tang fish named Dory—frequently utters the tagline “Just keep swimming.” In a “neuropsychological” film review, Danielle Brinckman refers to this tagline as “aquatic advice for coping with amnesia.” While the film itself, as well as its sequel Finding Dory, does not reveal the source of Dory’s amnesia and short-term memory impairment, reviewers ranging from neuropsychology buffs to wellness promoters to Alzheimer’s advocates and –bloggers have connected Dory’s memory impairments to dementia.

I stumbled upon the Dory-dementia connection a week or two ago while researching the depiction of Alzheimer’s and other dementias in the popular media. I had never viewed either of the movies. Despite lures such as “Although she suffers from short-term memory loss, to Dory the glass is always half full” and “here is a brilliantly funny family film about sea creatures whose little blue heroine happens to suffer comically from the malady that grandma, grandpa and sweet Aunt Millie have been making jokes about for 10 years now,” I might never have taken the trouble to see the movie if it hadn’t been for the travail-a-deux of a two-kid sleepover. 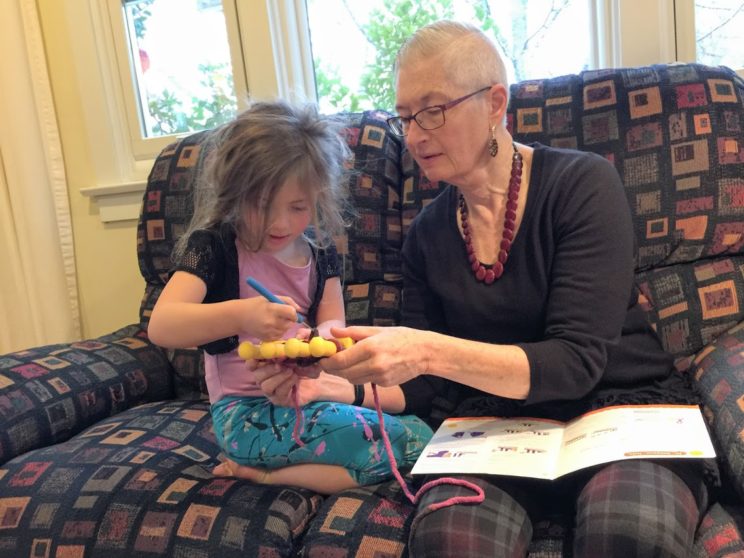 Last Monday it was my six-year-old granddaughter Aliya’s turn to have Ouma and Oupa all to herself. Apparently having found her grandparents’ usual minute-by-minute doting and enabling during previous sleepovers as insufficient divertissement, Aliya asked ahead of time if she could invite our next-door neighbors’ daughter, four-year-old Maya, to stay over as well: “Maya is my very best friend and I have never in my life had a sleepover with her.”

What grandma has it in her to deny a plea made with the pathos of a Make-a-Wish request?

Not me. And thus commenced the 24-hour fun-marathon from which my over-tasked memory was still recovering days later. 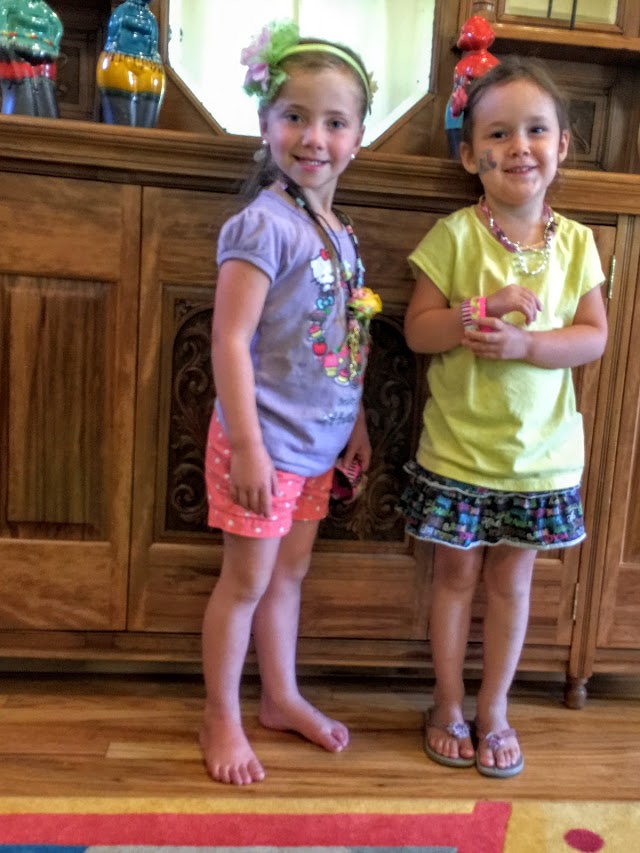 When the girls arrived on Monday afternoon around 5 pm, the whirlwind started— with nary a break for dinner. Oupa, who had spent the previous week’s sleepover on building a computer-operated “spy camera” with nine-year-old Kanye, was excused from the “girl” activities at which he sucks—and at which this feminist excels. (He’s great at meal-, snack-, owie-, and cuddle times, though.) With Ouma on stand-by at trotting distance, Aliya and Maya made flower-enhanced mud puddles, vied for time on the swing, climbed the front-yard tree, hung from the ropes stretched between the trees, drew, crafted, and prepared an art show that we geriatrics of both genders viewed with appropriately over-the-top admiration. By the time the two little girls had put on pajamas, brushed teeth, heard a bed-time story, and were asleep in the spare-room bed—an embarrassment of stuffed animals snuggled between them—Oupa and Ouma barely made it to their La-Z-Boy couch before collapsing. 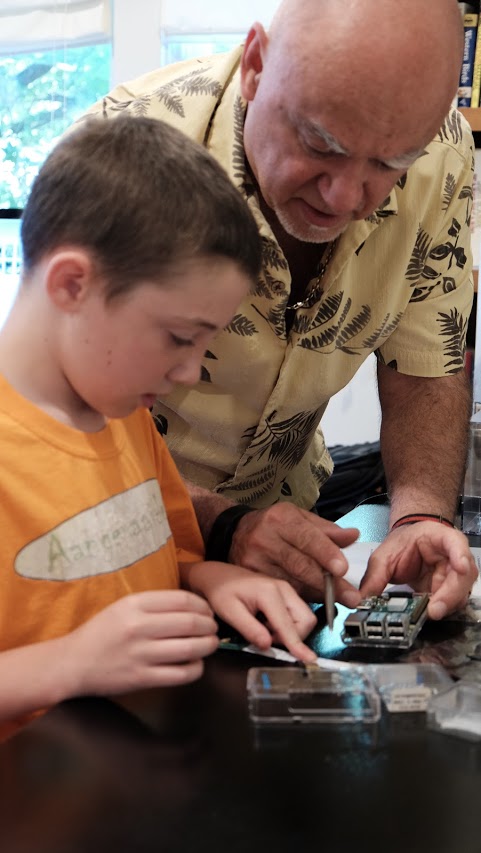 In the morning we were somewhat restored—enough to again function as gymnastics spotters, argument adjudicators, craft enablers, snack servers, story readers, and promoters of tidying up.

By lunchtime, Ouma was ready for a nap.

Not really an option. A law of childhood seems to be that as soon the adult in charge retreats to the bedroom for a rest or even just leans back on the couch to relax, one of the chargees will hurt herself or shape-shift against the adult’s just-letting-go body to “rest” beside her. 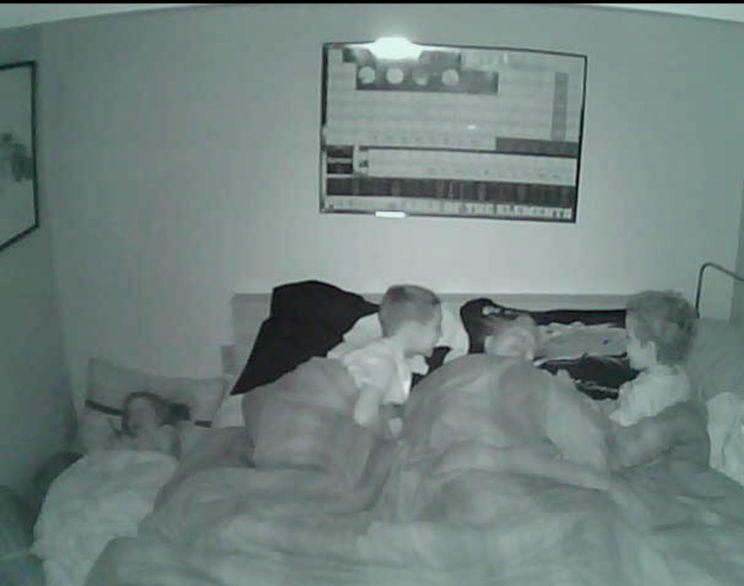 After the nth interruption of my supposed repose, I had a convenient back flash: Finding Dory was showing at the Sugarhouse theatre—the girls would love it, and I am good at catching a wink in the magical dark. I asked Maya’s mom, Stephanie, if she would accompany us and do the driving. Besides, another adult would be handy in case one of the girls had to go to the bathroom in the middle of the show. And so it came that I got to see Disney’s latest wonder with two utterly entranced little girls speechless between Stephanie and me. The 3D effects were so in-your-face and the characters so charming that nodding off did not even occur to me. 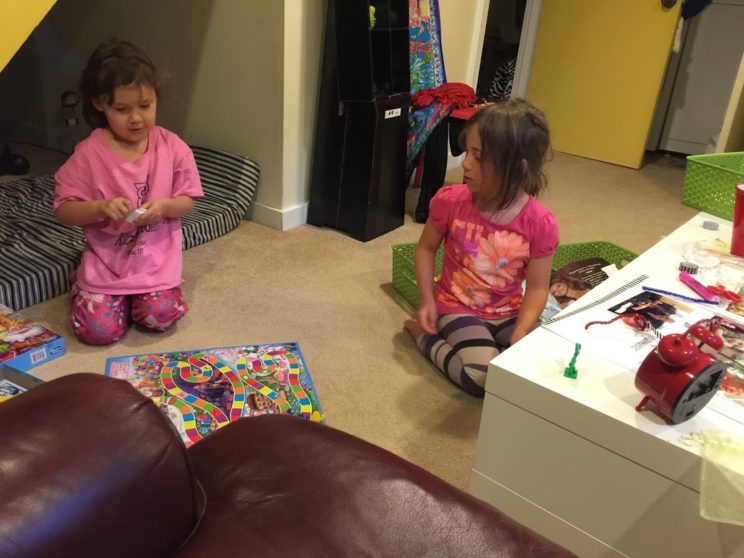 Like its predecessor, Finding Dory sets off on an ocean trek. While in Finding Nemo the lead character was a daddy clownfish named Marlin who—together with his side-kick, a memory-impaired tang fish named Dory—journeys from the California coast across the Pacific to find his son, Nemo, in Finding Dory the eponymous tang fish is the hero who, with Nemo and his father as side-kicks, set out on a quest to find her parents. All the while Dory’s short-term memory loss threatens to ruin her end goal of finding her parents. Sometimes she doesn’t even remember what her goal is.

The depiction of memory loss in the film struck me as very realistic. I agree with clinical neuropsychologist Sally Baxendale that Dory’s behavior accurately portrays many of the “considerable memory difficulties faced daily by people with profound amnesic syndromes.” She explains that Dory’s difficulties in learning and retaining any new information, recalling names, and knowing where she is going or why” depicts the experience of humans with profound memory disturbances. “The frustration of the other fish around her with constant repetition also accurately reflects the feelings of people who live with amnesic patients. Although her condition is often played for laughs during the film, poignant aspects of her memory loss are also portrayed, when she is alone, lost, and profoundly confused.” 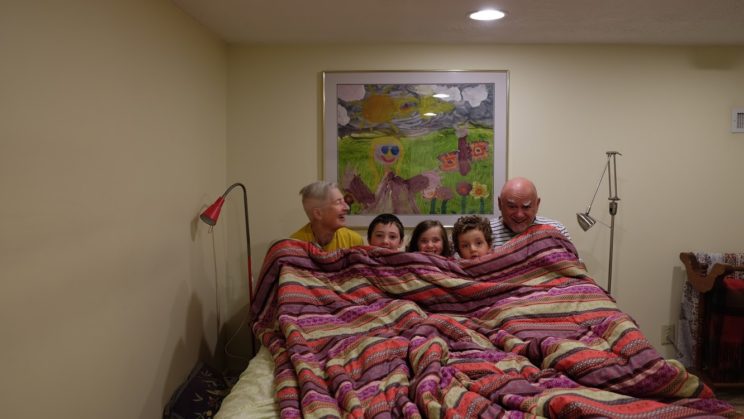 Other aspects of Dory’s behavior, though, struck me as utterly out of sync with my experience. First, the series of just-in-time back flashes that eventually leads Dory to her parents are just too serendipitous to believably come from a brain that—if it works anything like mine—is unable to create or execute the multiple steps that would result in reaching the end result. The set of processes necessary for the rational control of one’s behavior and resources in order to achieve a goal is know as the executive function. They include controlling one’s attention, inhibiting impulses, being cognitively flexible, reasoning rationally, problem solving, and planning. Without them, mental control and self-regulation becomes impossible.” The breakdown of the executive function is characteristic of short-term-memory loss. I have been diagnosed with it some years ago, and my family and I notice that my deficit is increasing all the time. 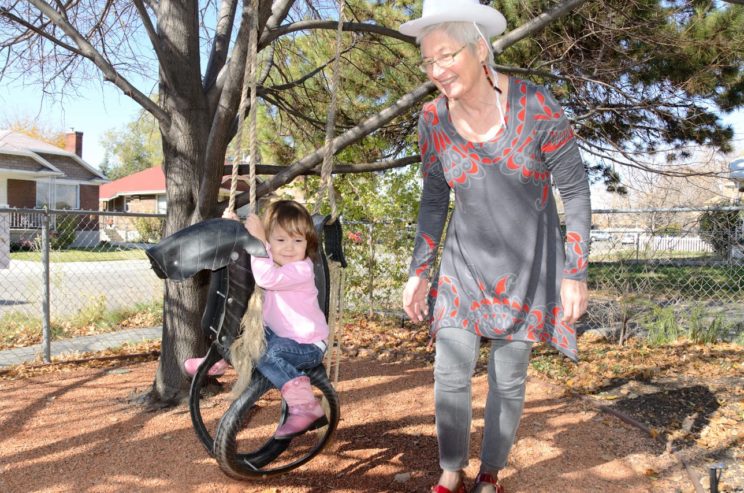 As far as Dory’s behavior goes, she seems to have an uncanny ability to remember just the right detail about her parents or former home at just the right moment. Moreover, these memory flashes come when she is very agitated. I can attest to the fact that agitation is the worst enemy of memory: when I am in a tizzy, I cannot remember things that still come to me in a calm state. It is totally fine with me that Disney’s writers make up a plot in which the deus ex machina of back flashes enable a happy ending. What I don’t appreciate is that neuroscience professionals do not address this aspect when comparing Dory with a sufferer of dementia. I concur with Matt Gaventa that, rather than reflect real-life short-term memory loss, Dory’s “capacity…adjust[s] itself depending on the contextual needs of the narrative.” 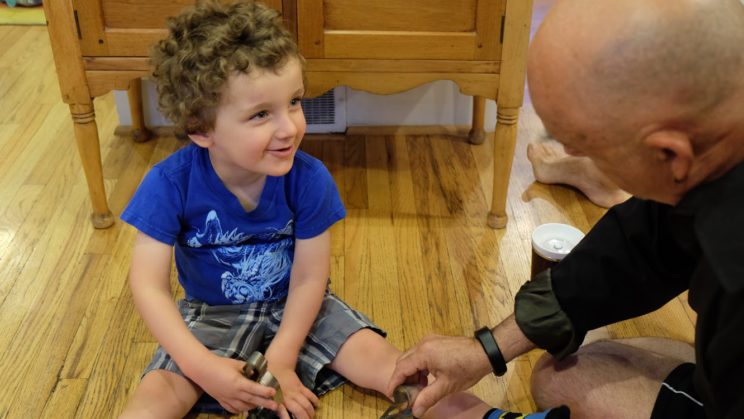 My second beef about the supposed equivalence between Dory’s memory loss and that of actual dementia patients is her relentless optimism. While it is theoretically possible that someone with dementia who is always up beat might be found, such examples are notably absent from the neuropsychological literature. As dementia websites testify, it is rather the case that mood swings is an early clue that there is something seriously wrong with a person you love: she may switch between emotions within a matter of seconds for no apparent reason or, alternatively, show less emotion than s/he used to do previously. Negative behavioral changes, too, are early indications that someone has dementia. He may become suspicious, irritable, depressed, apathetic, anxious, or agitated, especially in situations where memory problems are causing difficulties. 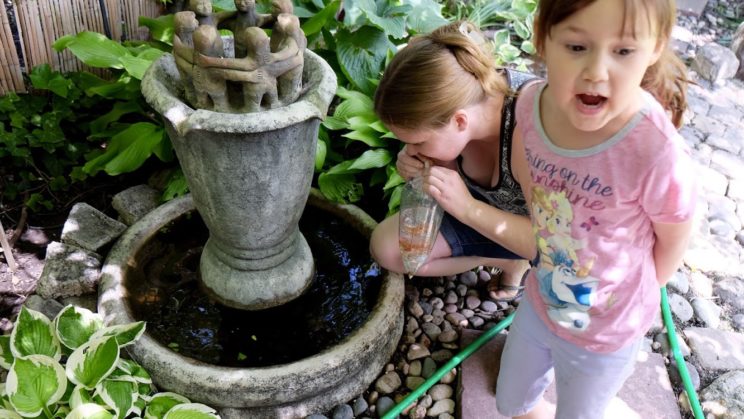 What dementia web pages do not tell is how mentally drained one becomes as you strain all day to get something on your checklist marked off. Doing one’s own chores is difficult enough. The difficulty increases exponentially with the number of people involved in a common goal—you have to track not only your own steps in a task, but also coordinate the your collaborator’s moves. Construct a working crew with one dementing Ouma and two little girls, and soon you’ll end up with the “leader’s” brain tied in a knot as tangled as the yarn and strings of beads and ribbons in the post-activity craft basket. Truth is, I sucked as a helper in all of the lovely things I was recruited to help with. When running into the house to fetch a water jug for the mud puddles or upstairs to find a stapler for the art-making, I would find myself in the kitchen or upstairs wringing my hands or knocking my head with my fist in attempts to dislodge the forgotten goal from my mind. Trying to revert to the old trick of going back to the place I came from to jog my memory, I often could not remember where that was until I again ascertained the girls’ whereabouts. It took multiple attempts to get the simplest things done. Fortunately Maya and Aliya are both very creative and sometimes would have moved on to the next adventure by the time I arrived with the requested object. 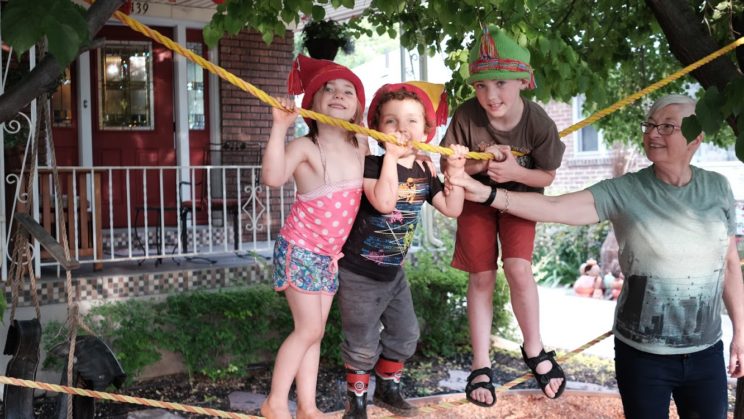 While I might have been able to repeat the “just keep swimming” mantra as well as a Ellen de Generis who voices Dory in the film, putting additional words in my head would just have made me more confused. The relentless optimism I did manage to emanate toward the girls was dearly bought: the next day my brain was so fried I could not even read or watch TV. I just sat with my eyes closed listening to the radio and napping all day.

Of course—as long as I can manage it—I would not trade the special time I had with Maya and Aliya for anything. Reality is that it is not my choice to trade or not trade. Dementia (akaDoña Quixote) is taking my memory—my Memories with a capital M—without giving me anything in return but agitation and depression. 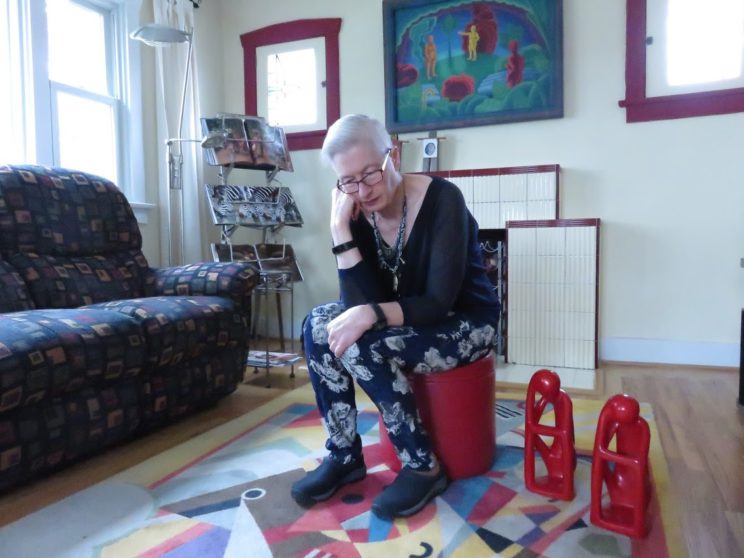 I am becoming a Dory without a Marlin or a Nemo.

I am becoming Doña Quixote—who waxes as I wane.

Doña Quixote, who must and will have the last word, smarmily remarks, “I swim therefore I.M.”

Dementia Can Go Like This: The Nine Lives of Michael Kelly The Onion Reviews ‘Finding Dory’

Crazed by Cruella-de-Virus, Doña Quixote shops her closet for “athleisure”; failing, she concocts “streetwear” she fancies Glenn Close might go for