It is much more fun writing about Doña Quixote, aka My Dementia, after the fact than living with her when she starts acting up

At the start of winter, Doña Quixote moved in from the cold on the back stoep into the kitchen, where she is dangling from a hook in the ceiling. I shouldn’t have been such a push-over in letting her in. Give her a pinky… 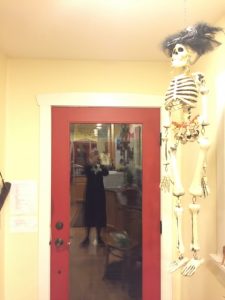 These last two weeks—since the start of the new year—the Doña has really been acting up. Even before Peter dislocated his shoulder on January 8, she was already messing with my head. However, she really shocked me when she tagged along to the hospital and sat heavily on my shoulder while my daughter Marissa and I took him to the Emergency Room: I was unable to fill out the medical information forms and find the right insurance cards to get him checked in. If it had not been for Marissa, I would have had a very hard time coping in a situation the likes of which I had managed (or could have managed) on my own all my life before: Marissa’s emergency room visits during severe asthma attacks and her broken arm, Newton’s broken collarbone and wrist, and Peter’s bladder cancer, prostate cancer, and kidney stones. But not this time. 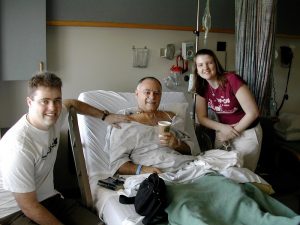 Newton and Cheryl cheer Peter up with Starbucks coffee after his cancer surgery in 2004.

On Sunday January 8th, Peter was holding my arm in support as we stepped out from our garage onto the driveway. On our first step, he slipped and, still holding my arm, pulled me on top of him. My fall was broken, his injury probably made much worse than it would have been if he’d only borne his own weight. Once we got ourselves upright, it was clear to me that his injury merited a trip to the Emergency Room. He was as pale as the snow and his arm hung strangely askew by his side. I thought it was broken. As I helped him into the house, he looked as if he were going to faint, so I pulled up a chair to the kitchen counter for him so I could watch him while I phoned our kids. I had my usual confusions with dialing wrong numbers—it took about three tries before I got it right (I forgot how to get to the list of stored numbers), but otherwise I was calm.

After phoning both Newton and Marissa without success, I was going to call an ambulance, but just then they called back—Marissa first, and, when she was on her way across the block-and-a-half between our houses, Newton too from his house a few minutes away by car. By then Marissa was at out house, and we managed to get Peter into the car and drove to nearby Saint Marks Hospital, which I knew was in our insurance network. Why not call the ambulance directly? First, I did not know if an ambulance would necessarily take one to a hospital of your choice. Second, and most important, I wanted someone from my support system by my side. And just as well… 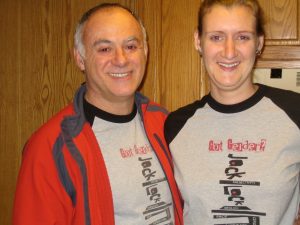 After Marissa had helped me do the paperwork and find the correct cards from my and Peter’s wallets, I turned out to be a hindrance in helping Peter take off his shoes and belt and so on—I got confused about how to undo the knots in his laces and worse, I kept forgetting which was his injured arm, touching it and hurting him. Fortunately I was together enough to know that I was in the way and moved to a chair against the wall so that Marissa could help him instead. It was clear that my confusion was not just in my mind—Marissa acknowledged it and started taking care of me too, hugging and reassuring me, and fetching me coffee—on top of taking charge of the communication with the medical personnel. She became, among other things, Peter’s advocate for more pain medication after two shots of morphine had barely taken the edge off the pain. After two hours of unrelenting pain—even a medication the nurse had administered after the morphine gave hardly any relief—Peter’s X-rays confirmed that he had dislocated his shoulder, as the doctor and nurse had suspected from the beginning. At last, pain relief came when he was anaesthetized so that his arm could be “reduced”—that is, manipulated in order to get the humerus back into the shoulder socket. When he woke up after only a few minutes, the pain was virtually gone. Even though the hospital discharged him with a Lortab prescription, he has not had to take anything other than Ibuprofen since getting home—which does not mean that he hadn’t had pain, though: for the first week he slept no more than two hours at a stretch because of persistent pain through the night. 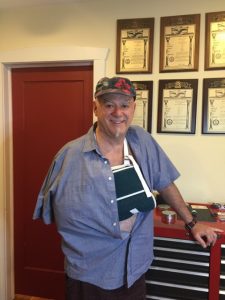 One of the things about having dementia that most people might not know is that even the slightest change in routine—especially those involving sleep and the timing of medications—can launch a person into a madwoman-in-the-attic state. Given that I got up at night with Peter most of the time for the first few days at home to help him to the bathroom and get his pain tablets, I soon became as sleep-deprived as I had twice been with a newborn at home. In those days, however, I could function almost as well as usual the next day. This time, though, I was completely nutty.

First, I got confused about taking my medications: I took the morning medication in the evenings or vice versa; sometimes I took both batches at the same time. Some days I skipped. I would realize my mistakes after the fact. Even when Peter helped me remember, I would come back later and forgot that I had taken them and swallow another batch. Or I would forget that he reminded me and not take them. I just could not keep things straight.

Second, while helping Peter to shower and get dressed in my sleep-deprived and over- or underdrugged state, I was totally confused and could not figure out what the next step was in a routine task—such as what to do after I’d buttoned his shirt—without him telling me: tuck it in. One time when I was helping him put on his shoes and socks, I accidentally fetched an unmatched pair of socks and had to go back to his closet to find a mate. A few minutes later, he called me. “Have you found the socks yet?” I actually had. However, I had forgotten what I was going to do with them and had started putting them—plus another bunch of laundry—into the washing machine. 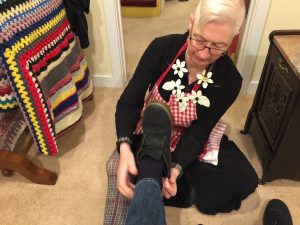 In this quixotic manner, we somehow got through the first week. Both Newton and Marissa offered food and help and driving—after the first day, we mostly managed with what we had at home; we took Uber cars to doctor- and other appointments. Our sleep-deprivation continued the second week, that is, until Peter started physical therapy with a veteran reliever of joint-related maladies, who told him to get one of those long, soft body pillows to hug at night, like you would hug a tree/or your wife? if you weren’t too scared to go near her because she constantly hurt your arm? From the first night with the pillow onward, we’ve both had many-hour stretches of deep, sound sleep. 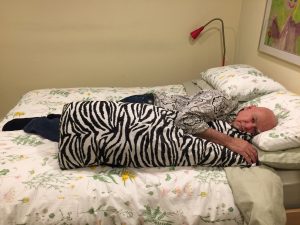 Unlike Peter’s two remarkable instant pain relief experiences—after the shoulder reduction and the adoption of the pillow—my confused state did not immediately clear up. It is only now—after almost a whole week of good sleep—that I have returned to my “ordinary” craziness.

There is a maxim among caretakers of older people that every time the old person gets an injury, he or she will almost never recover to the same level of health as before—you may get better enough to resume your life to a large extent, but the damage done by a broken bone or a bout of pneumonia, together with the anaesthetics and other medications used in fixing it, puts you a step behind where you were on the health curve before your mishap. So it will be with Peter’s shoulder injury—which, we tell ourselves, is okay, because he has no desire to play racket ball or take up rock climbing. It seems to me that the same maxim holds for an injured brain. My experience has shown that every time I have a Doña Quixote episode, I get better again to some state of “normal.” Normal, in this context however, is a downward-trending state of being. Six years ago when Peter lay curled in the fetal position on the floor of his study with what we would learn were kidney stones, Marissa took us to the hospital too—already then I could no longer drive. Then, though, she functioned mainly as the driver. I was the one comforting Peter and communicating with the doctors. The difference in my coping skills between that time and this past January Sunday is big enough that everyone in our family noticed it. I may be the one who has spent the most hours brooding on it, though: I have seen a bit deeper into my future.

Tonight I am very glad that I am functioning better. I am grateful to have been granted another interval of self-reflection, of a mind that works well enough so I can write. Someone else can always help Peter with his socks—it is only I, though, who can tell about the joy of having a vacation from dementia, of being well enough again to write—and about the crowning bliss of being able to love people better this week than the last.

On the Ides of January, I Check Off My First New Year’s Resolution: “Revamp Website” √ Eric Shulzke interviews me about dementia and assisted death in a Deseret News article about the status of Utah’s end-of-life choices law