Some of my friends tell me I’m famous for having written Memory’s Last Breath. Well, I like to think that I am. But not quite in the way those friends might imagine. While I am ecstatically grateful for the great reception that my book has received upon publication, in the enormous world of US publishing a positive review in the New York Times, an appearance on NBC’s Today Show with Maria Shriver, and/or a Weekend Edition National Public Radio interview with Melissa Block doth not a literary celebrity make. For most authors, especially those who write in the”literary” realm, “fame” takes many years of extremely hard work and repetitive success. Take, for example, the two famous writers in whose exalted company I briefly found myself in the anticipatory period before Memory’s Last Breath‘s publication: humorist, author, playwright David Sedaris and novelist, short story writer, poet, filmmaker Sherman Alexie. Our books appeared on the same list in Kirkus Reviews under 10 Buzzworthy Books from Memoirists and Essayists. 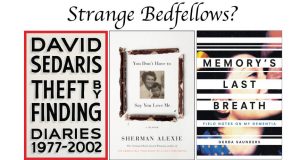 David Sedaris’s memoir, Theft by Finding Diaries, was published the same week as Memory’s Last Breath. Like mine, his memoir received a favorable review in The New York Times. He was also interviewed on NPR—and by many, many more radio, TV, and print media people than I can dream of. Before Theft, he published a dozen other books. Over his 25 years in the public eye, he celebrated each new book with a nationwide book tours—draining and sometimes thankless affairs, particularly on a night it rains or snows and only a handful of people show up. He has won the Thurber Prize for American Humor, named by Time magazine as “Humorist of the Year” in 2001, and nominated for the Grammies at least 3 times.

David Sedaris DESERVES this recognition—it is the result of many, many years of hard work. His books are bestseller: Theft by Finding Diaries is # 57 in Amazon’s list of (the so-far) 100 best-selling memoirs in 2017.

And so is Sherman Alexie. 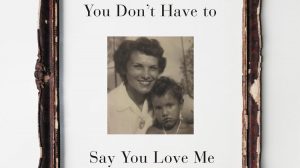 The photo on the cover of Alexie’s memoir shows him as a child with his mother.

Sherman Alexie’s You Don’t Have to Say You Love Me: A Memoir also came out the same week that Memory’s Last Breath did. Like mine, his memoir was reviewed in The New York Times, but not as favorably. He was also interviewed on NPR—at least twice. One of the interviews was by Terry Gross, who is to public radio as Charlie Rose is to public TV. Therefore, mentioning Sherman Alexie (and of course David Sedaris) in a post that even suggests an equivalence between him and me (“like mine,” “as mine”) is sacrilege: Alexie has already been recognized as being right up there with other major Native American authors like Louise Erdrich, Lesley Mormon Silko, Paula Gunn Allen, and N. Scott Momaday, all of them who will be read long after they are dead. Which makes it surprising that he does not (currenty) appear on Amazon’s list of the 2017 best-selling memoirs. He himself considers his primary audience to be “college-educated white women. That’s who buys and reads our books in mass numbers…That said, my ideal reader is a poor, weird brown kid. And I get enough letters from them. When a weird brown kid says, ‘This story meant this to me,’ that’s the power.” (“Sherman Alexie and the Tricky Art of Memoir,” The New York Times.) 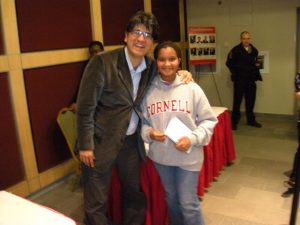 “Weird, brown kid” Zawan with Sherman Alexie after he signed her book. Zawan is from Sudan, but was at the time living in NY. “I love reading and I take it seriously; I’d like to be a novelist and literary critic.” (2009)  Read Zawan’s review of Alexie’s The Absolutely True Diary of A Part-time Indian, written in 2009 when she was 13.

A note about Alexie: He prefers the word “Indian” to describe his heritage rather than Native American. 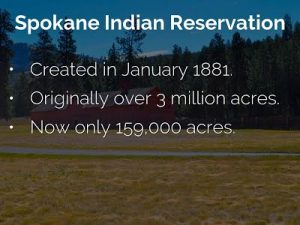 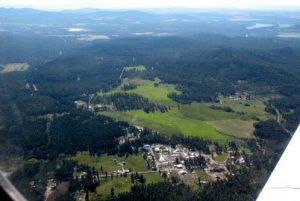 Alexie’s journey to renown has been harder than those of most writers. A Spokane/Coeur d’Alene tribal member, Alexie grew up on the Spokane Indian Reservation in Wellpinit, Washington. He was conceived by rape, born hydrocephalic and not expected to survive. Plagued with seizures as a child, he spent most of his childhood reading. In the eighth grade, he decided to attend a high school outside the reservation. His achievements there landed him a university education, during which he began writing poetry and short fiction. While he was battling alcoholism, Alexie’s work was published in Hanging Loose magazine in1990. He credits this success with giving him the incentive to become sober. He has now published 25 books—novels, short stories, poetry, and now a memoir. 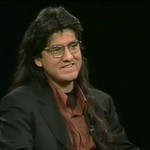 Sherman Alexie at about the time I met him at Writers@Work (1998).

Sherman Alexie (2016). After Alexie had cut his hair, an audience member told him that he had “looked more Indian with long hair.”

Given Alexie’s characteristic self-deprecation, his assessment that white women and “poor, weird brown kids” constitutes his main readership greatly undersells his influence on American culture. Moreover, he has gone beyond writing to a medium that reaches many more people than books: his film Smoke Signals (1998) is the first all-Indian movie, and, moreover, a major studio release. Like his books, Smoke Signals—as he “immodestly” says himself—”totally altered many people’s ideas of what an Indian can do and can be. Especially other Indians.” His work shows that “a majority [of Indians) are very assimilated….Aside from particular cultural things and ceremonies, there’s not a whole lot of cultural difference between poor white people and Indians. Indian culture is, by and large, pop culture.”(“Redeemers,” The New Yorker, 2003.) 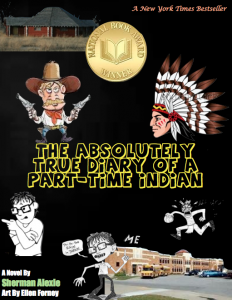 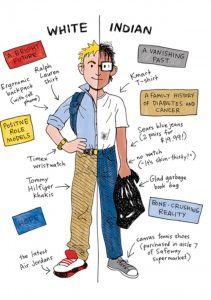 A yet unnamed part of Alexie’s readership consists of university students and teachers: he is widely read in disciplines ranging from English to Ethnic-, Gender-, and Cultural Studies, as well as post-colonialism, to name a few. His novels and poetry has already generated a whole volume of scholarly commentary: Sherman Alexie: A Collection of Critical Essays.

Compared to Sedaris and Alexie, my own “fame” is like a stalk of broccoli to the Amazon. 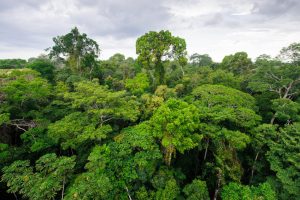 There are, however, places my book has gone that I doubt either Sedaris or Alexie could match. 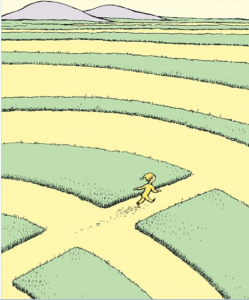 Which brings me back to broccoli—and vegetative growth of a similar kind: The Liberty Wells Community Garden on 1700 South and 700 East in Salt Lake City, in the establishment of which my daughter-in-law Cheryl participated and where she and her family have their own plot. 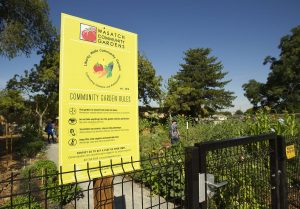 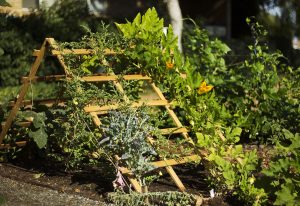 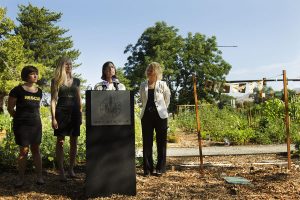 Cheryl’s plot is easily visible from 700 East by a number of turquoise plant supports. The photos are from their garden at home, where they used the same spirals. Left, Kanye’s peppers in a raised bed he built himself (not shown). Right, more peppers and another turquoise support in the raised beds that Newton and Cheryl built on their usually non-productive sidewalk strip. 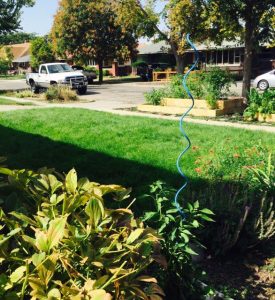 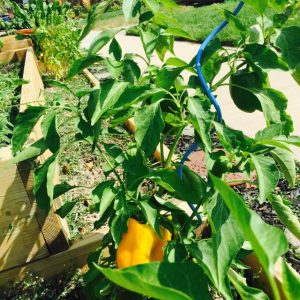 It is when Peter and I spot Cheryl’s spirals while driving along 700 East, which we frequently do, that I feel famous. For, what do you know, Cheryl and Newton have donated a copy of my book to Liberty Wells Community Garden’s Library! In case you missed it in the main photo, here it is again: 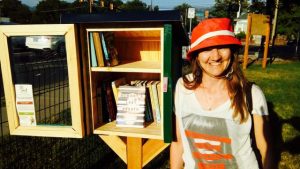 And in this lies my fame: I have a daughter-in-law who loved me long before Doña Quixote moved in, who loves me now, and (if I’m sure of anything, I am sure of this) who will love the last shred of me that sticks around. How magnificent that she values me and my book enough to want to share it with people with whom she has in common a very important thing in her life: community work.

You wouldn’t think this couldn’t get better, but it does: you may have to take my word for this, but the sharp-eyed among you might be able to make out, on the spine of the yellow book just to the left of Memory’s Last Breath, the word “Winnie,” as in Winnie-the-Pooh. What greater honor can be bestowed on a writer that having her book closeted in a cosy, garden library together with A.A. Milne’s classic? 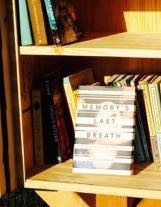 How fabulous to fantasize that, for someone in Cheryl’s community—also MY community—Memory’s Last Breath might one day be “a Sustaining Book, such as would help and comfort a Wedged Bear in Great Tightness?'” 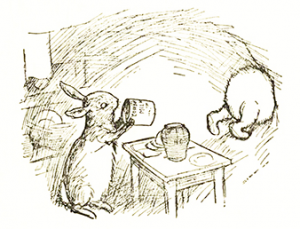 Now that would be fame indeed!

Gerda’s j_wls in a language that used to have no v_wels Ask Doña Quixote: what is the difference between Alzheimer’s and cerebral microvascular dementia?