The people Doña Quixote introduces me to: Gillian and Jonathan Bennet, the remarkable couple to whom this post is dedicated

Main image: Gillian Bennett and her cat Cosmo (photo courtesy of Jonathan Bennett). A totally unexpected pleasure from my blog is people writing to me out of the blue. One such e-mail did give me pleasure, but of a kind I have to qualify: the pleasure lay in the fact that I immediately recognized Jonathan Bennet as a kindred spirit in at least the dementia aspect of my life, but I suspect in other things too. (To start with, Jonathan is a retired philosophy professor). Jonathan’s email affected me so deeply that I could not even tell Peter about it until I had taken a day or two to make peace with my jolted sensibilities. When Peter got the e-mail, he was sitting on our back stoep with his birds and squirrels. When he stepped into my study a few minutes later, I could see that he was similarly affected by Jonathan’s story. We cried together for a while, then made (our most recent) peace with the outcome of my dementia upon which we have decided: self-death. 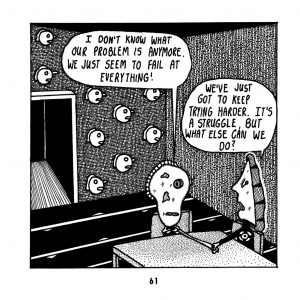 Before I post Jonathan’s letter with his permission, here is what I wrote him back: “I am deeply touched that you took the time to send me this beautiful e-mail and the link to your wife’s astonishing letter. I have so much admiration for you who have walked the path with someone who had dementia, and that you were able to support her in her decision to take control of her death. I am sad for you and myself and so many others with dementia who do not have access to a legal assisted death. It is wonderful that you and your wife for have had a relationship in which you could support her in achieving her goal, which must have been the most difficult thing for you to do. 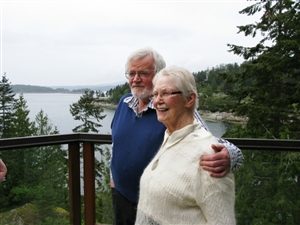 “Your wife’s letter made me think a lot about my own situation. Her writing is so excellent and her tone so rational that, if I did not experience the situation myself, it would be hard to believe that she has dementia. I, too, am still capable of writing and speech, while at the same time experiencing sometimes intolerable anxiety and/or depression as I battle with every little task in the material world.” 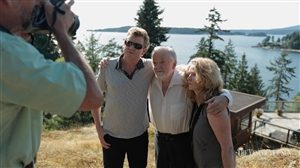 John in the middle, with his and Gillian’s children, Guy and Sarah, by his side. (Image source: The Vancouver Sun)

“Your and her story is remarkable and has inspired and moved me so much. My respect and appreciation for you is boundless.”

Here is Jonathan Bennett’s e-mail, which contains a link to his wife Gillian’s letter. Thanks so much, Jonathan, for allowing me to share it widely.

For my readers, do check every page of  Gillian’s website—Be sure to go to the “About” page, which has links to news reports and a video of her husband and children that was made after her death. I don’t doubt you will find this family’s love remarkable too.

Subject: Your dementia and my late wife’s

I was stirred by every moment in your interview with Susan Bonner. Your handling of your dementia has obviously been good for you and for the world, and I thank you for it. As my wife of 57 years was slipping into dementia, she also made use of her rational  aspects and intervals by crafting a farewell letter; it was posted on www.deadatnoon.com, which has been visited half a million times, though the letter has been read many more times than that. We, her family, believe that in this way she was doing the world some good. Something you said near the end of the interview was painfully relevant to her situation: she died sooner than she might have, because she was determined not to leave her suicide until she was no longer able to do it unaided. As she said to me: “I don’t want you to go to jail, and you are a rotten liar.”

—With gratitude and deep respect,

Listen to Gerda being interviewed about MEMORY’S LAST BREATH by Susan Bonner for CBC’s The Sunday Edition My Youtube interview with Michelle Dunton, the Writer-Whisperer

A RadioWest “Staff Pick”: short film series about Gerda and her family’s life with dementia