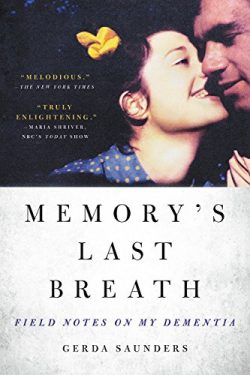 In the tradition of Brain on Fire and When Breath Becomes Air, Gerda Saunders’ Memory’s Last Breath is an unsparing, beautifully written memoir–a true-life Still Alice that captures Saunders’ experience as a fiercely intellectual person living with the knowledge that her brain is betraying her. Saunders’ book is uncharted territory in the writing on dementia, a diagnosis one in nine Americans will receive.

Based on the “field notes” she keeps in her journal, Memory’s Last Breath is Saunders’ astonishing window into a life distorted by dementia. She writes about shopping trips cut short but unintentional shoplifting, car journeys derailed when she loses her bearings, and the embarrassment of forgetting what she has just said to a room of colleagues. Coping with the complications of losing short-term memory, Saunders nonetheless embarks on a personal investigation of the brain and its mysteries, examining science and literatures, and immersing herself in vivid memories of her childhood in South Africa.

Written in a distinctive voice without a trace of self-pity, Memory’s Last Breath is a remarkable, aphorism-free contribution to the literature of dementia—and an eye-opening personal memoir that will grip all adventurous readers.

WHY I WROTE THE ESSAY

About 2 years into the writing of MEMORY’S LAST BREATH, I feared that I might not be able to complete the memoir because writing became harder and took much longer. Drawing on chapters I had completed, I wrote a long essay titled “Telling Who I Am Before I Forget: My Dementia,” which was originally published in the Georgia Review and later reprinted in Slate. In the words of Kate Garrick, book agent at DeFiore & Company,  “Thousands of people, including New York Times book critic Dwight Garner, shared the essay via social media. The territory here isn’t completely uncharted – William Styron explored a similar space of mental insecurity in Darkness Visible, as did Susannah Cahalan in Brain on Fire – but the vantage here is new because Gerda Saunders knows she will not recover. She will dement until she dies.”

Memory’s Last Breath is available for bulk purchases and premium sales.  To inquire about terms and conditions, please contact Hachette Book Group Special Markets at 1-800-222-6747 or at HBGSM.

For enquiries regarding any translation or performance rights please contact Kate Garrick at kate@karpfinger.com 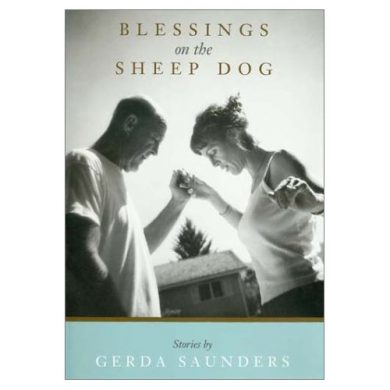 Order Blessings on the Sheep Dog

From the violent world of apartheid South Africa to the supposed immigrant haven of the United States, the people in Saunders’s debut story collection brave life’s big questions about connection, displacement, death, love, race, and justice. In “We’ll Get to Now Later” Stan, a guilt-stricken white South African immigrant confronts his apartheid past when he meets a Zulu dancer traveling with a circus in the United States; in “Pig Day” Jared, an American teenager, accidentally kills his best friend Nick, the son of a Romanian immigrant, and is co-opted by the bereaved father to build a coffin;and in “A Sudden New City” Heila, a mentally and physically faltering white South African grandmother, drives a tractor into a black crowd as revenge for her husband Jacob’s infidelity across the color line. The voices in Saunders’s stories are male, female, young, old, American, South African, Romanian. In richly textured prose, they attest to moments as sublime as the music of the spheres or depict images of earth bound brutality bloody as a goat’s severed head on a pike. In the tradition of Nadine Gordimer and Norman Rush, but with its own sense of comedy and metaphor, Blessings on the Sheep Dog is a wizardly act of ventriloquism to listen to, relish, remember.