When science and holiness became one: a reminiscence on today’s eclipse, ending with an excerpt from “Blessings on the Sheep Dog”

Like many millions of our fellow-Americans, Peter and I ventured outside a few minutes before 11 am Utah time armed with our pinhole cameras and a colander, the latter having been recommended on the radio as a good instrument for focusing and multiplying the eclipsing sun’s image. The colander worked remarkably well—definitely better than our pinhole cameras. 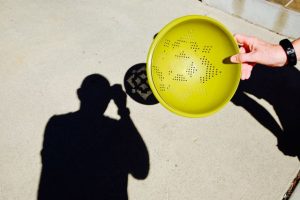 The colander produced a delectable pattern of crescent suns.

Soon we saw our neighbors the Browns outside, employing their own home-made instruments. We walked over and had an impromptu eclipse party, which lasted until David had to go to work.

From the left: Gerda, Lynda, David, and Max watch the shrinking sun crescents. Right: After a while, we all went across the street to our driveway, where Peter and I had earlier noticed that our trees performed much better than our gear in producing solar images.

Left: The tree leaves outperformed our homemade observational tools. Right: an odd optical effect: from a certain angle the pattern on the sidewalk popped into three dimensions. Sometimes I could blink away the three-dimensionality for a few seconds, but it always popped back. From his vantage point under the tree, Max quipped, “I feel like I am sitting on a cloud.”

In Utah, we only reached 91% of totality. Right, photo credit: The Salt Lake Tribune

My thoughts went back to a previous solar eclipse that I observed: We were in a house Newton and Cheryl had rented near Zion National Park. The date was May 20, 2012—no, I don’t remember it, but the photos told me: Kanye was almost 5 years old, Aliya 2. This was the trip when, while we were all traveling down to Zion’s, Marissa and Adam called from Chicago to tell us that they were going to have a baby. We were all filled with joy at the prospect of a little cousin for Kanye and Aliya. To top it all, there was the eclipse too the next day. All the adults of course made pinhole cameras and watched the sun shrink together with the kids.

Kanye (almost 4) and Aliya (around 2) found the sand and gravel of our landscaping more interesting than the scientific phenomenon; as for Newton, making his duck shadow puppet was at times more amusing!

Like today’s eclipse, the one in Zion also did not reach 100% totality. It nevertheless stands for a weekend of wonderful memories with Newton and Cheryl’s family, as well as the joy of a new baby in the making and the melancholy of having Marissa and Adam far away. Today’s eclipse, too, stands for a whole firmament of important things: the awe of watching the sun’s erasure, the wondrous change in light quality to that of a late afternoon, the company of Peter and our neighbors, and the thought that this would likely be the last eclipse of considerable splendor that my brain would still understand scientifically. These factors made the hour, the minutes, the moments holy for me.

I will never see a total eclipse. Even though it had been a lifelong dream, I am at peace with that. Twenty years ago, I experienced one through the “truth of imagination” (John Keats)while I researched a particular total eclipse (that of June 7, 1973, the longest in recorded history) for a story I was writing and which is now in my collection Blessings on the Sheep Dog. In my book I tell how a seventeen-old girl (“never been kissed”), stranded in a plane on the runway of Nouakchott airport in the Islamic Republic of Mauritania while on her way from South Africa to America, experienced the (to her, surprise) total eclipse after being sexually harassed by two boys on the same journey, each of whom grabbed one of her breasts. I quote almost two pages, with some ellipses:

When I got to the plane’s open door, I ran toward the rectangle of sky hanging over the airport building. I tripped down the stairs into a strange light…I blundered into a run, tripping over my shadow as it skimmed across the potholes of a deserted road….When it became obvious that I wasn’t being followed, I slowed to a brisk walk and sucked moisture from my cheeks to swallow away the sting in my throat. Drawn by the sound of drums, I left the road. I clambered up a sandy incline, using tussocks of grass as hand- and footholds. When I reached the top, there was a beach before me, a pewter ocean stretching behind it. Semi-naked figures were beating with brooms on the hulls of upturned boats. I steadied myself against the trunk of a tree. Its shade on my skin was an eerie purple. So was my own shadow against the sand. I looked up. There were no clouds. In the sun’s place was a crescent no larger than the arc of Islam’s moon.

I knew what it was. I had read the astronomy magazine our school subscribed to from England. At first, as the light around me dimmed to the intensity of bright moonlight, I tried to remember terms and definitions: umbra and penumbra, the length of the saros, Bailey’s beads. But when a black hole took the place of the sun, I watched with an awe disconnected from words. Venus emerged on the horizon. The cry of a muezzin sounded.

(From the narrator’s adult perspective). This I forgot to tell: I am very religious. A strange thing to leave out, you may think. But no. Do you mention, when you tell people about yourself, that you breathe? I was religious then too, but with a self-punishing piety that led me to despise Martin Luther, to whose principles the Dutch Reformed Church I grew up in adhered, for having abolished the practice of self-flaggelation. My religious convictions now? We’ll get to now later.

I ran down the incline, pulling off my shirt as I went. Bra and skirt and panties followed, dropped on the beach as I ran. At water’s edge I sat down and took off my shoes. I flung myself down in the shallow surf, so that the breaking waves foamed around my breasts. Other figures joined me in the breakers. A woman squatted by me. She scooped up water in her hands and poured it over me. I felt the brush of her breasts against my back. She intoned a song, and the others picked up the melody. Their high voices reverberated in my skull. An abrupt sunrise erased the morning star. In the distance a cock crowed.

I lived a lifetime during that eclipse. I found out later that totality had lasted five minutes and thirty-two seconds, but at the time duration had no meaning for me. Many things have happened between then and now; none of them, though, has obliterated the impact on my mind of a world dissolved into monochromatic sterility at midday, a world edged with doom. After a long, long time, daylight restored a blue-green shimmer to the ocean, bringing with it—hope. Although I was only seventeen, this was my Damascus moment.

The soil on which I knelt was African.

My Youtube interview with Michelle Dunton, the Writer-Whisperer You are invited to Gerda’s Talk at the Tanner on Thu Sept 7 at 3 pm