What does the solar system on my ceiling have to do with Maria Shriver’s Brain Power series on the TODAY SHOW?

“It occurs to me that there is a considerable parallel between what happens in outer space and in the inner space of human life on earth.” (Source of main image: “Solar System of the Mind,” Saroja Srinivasin.)

Last week Peter and I had an astonishingly fabulous surprise—Maria Shriver wants to interview me, Peter, and our children and their spouses about my dementia for her series Brain  Power on the Today Show! 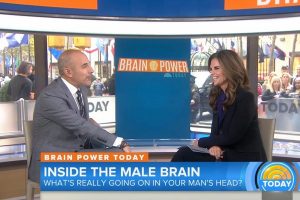 Maria Shriver and Matt Lauer introduce an episode of the series Brain Power the Today Show.

Yes, Maria Shriver, her producer Robert Powell, and a camera crew are coming to Salt Lake City on the 23rd and 24th of May to film the Salt Lake City Saunderses in situ. Next week. There is only one problem: starting Wednesday this week, we are having our house painted inside and out. We signed the contract long before my press, Hachette, started soliciting an appearance for me with the Today Show in their Brain Power series. Last week I had a try-out interview with Today Show producer Robert Powell—and I passed! Weeks before this exciting development, Peter and I, with help from our kids, have been stripping the walls of photos and paintings, packing up clutter in the form of tchotchkes from every surface, rolling up carpets, and stacking everything in the garage. Our walls are bare and studded with the nails that we are saving for easy rehanging of the pictures.

Our movable small dry goods are stored in the garage in preparation of our house painting.

Our usual steps-to-ceiling photo display in the stairwell. Now Peter is the only decorative object against the dirty, nail-studded walls.

The painting company has undertaken to get the house done by the weekend, so we—and I mean all of the Salt Lake City Saunderses-—will have 3 days to put the house back together again before it’s time for our close-up.

We have lived in this our Roberta Street house for ten years, “raised” three grandkids here. They have left surprisingly few physical marks on the walls or elsewhere in the house, despite indulging in major creative activities whenever they visit. At the moment Aliya and Dante like to build houses downstairs out of blankets or set up a shop that features on its shelves (every non-movable piece of furniture) most of our possessions light enough to be carried there by a 7- and 4-year-old and labeled with prices. These days Kanye, almost 10, prefers to fly Oupa’s drone or work with other technology-related objects to setting up shop. When it comes to projects that involve the playing of a prank, he is quick to join the others. He was the instigator, indeed, of a prank that cut off adult access to the downstairs part of our house: that is, it was inaccessable to adults who deemed themselves incapable of doing the army crawl—and that down a staircase.

The army crawl on level ground. The Saunders grandkid challenge: try it at home, uphill, on your staircase.

Fortunately, both Newton and Cheryl, and Marissa and Adam, are parents who believe that kids should clean up the messes they make in play. Accordingly, the entropy of our house will have decreased to its default mark by the time they leave.

Clean-up in progress after the grandkids’ “army crawl” prank.

There is, however, one permanent mark made by the grandkid generation that figured into our decision to repaint our house. For the past 5 years, when you walked through our front door and looked up to the ceiling, this is what you’d see: the sun rises in a corner near the front door. From there, arranged on a curved path through the kitchen toward the garden in the back, each constituent of our solar system appears in turn according to the same mnemonic I taught my children decades earlier: Mother Visits Every Monday And Just Stays Until Noon Promptly. On the ceiling near the back door sits Pluto, tearfully bewailing its demotion to dwarf planet.

This the creation story of our indoor solar system: When Kanye was about 5 years old, he had a sleepover at our house, followed the next morning with one of his then favorite activities, painting. We spread the plastic table cover over our glass dining table and lugged in the art materials from my office next door. A few masterpieces in, Kanye wanted to dilute the somewhat evaporated poster paints by dripping water into the containers with a syringe I had saved from a children’s Tylenol kit. When he pressed down the plunger, though, it was stuck. He tried to force it by pressing it hard onto the table surface. The only problem was that the syringe was pointing upwards. A jet of paint-black water rocketed ceilingward and, as gravitation dictates, came back down with a splash. His head was dowsed. We laughed and joked and cleaned up, and he continued to paint until he had amassed a gift and a spare for each member of his family.

Mysterious black spots materialized on our ceiling a few days after Kanye’s sleepover.

Some days later, Peter was sitting on his end of our La-Z-Boy couch in the living room, which adjoins the dining/entrance space, when he said, “What’s that on the ceiling?” Kanye’s syringe malfunction, it appeared, had created a sizeable area of black spots on the ceiling. When Newton and Cheryl next visited, we laughingly pointed out our discovery. They were mortified and offered to repaint the ceiling. Ouma hurriedly vouched that Kanye had not blemished the ceiling on purpose. All the while Kanye had been closely examining his inadvertent creation. With the delight of a prime mover, he whooped, “That is the asteroid belt!”

And so it came that Kanye and Ouma filled the void on either side of the asteroid belt with representations of the best-known objects that circle our sun.

Jupiter, left, and the 4 earthlike planets, right, flank the asteroid belt on our ceiling. Kanye made a pretty, triangular red hat for the god of the underworld—an appendage derived from the headgear of rubber-rendered Sleepy, Sneezy, Dopey, Doc, Bashful, Happy, and Grumpy that live on the toy shelf in the kitchen.

Our house painting plan of course includes the repainting of the entrance/dining room/kitchen area. Since this weekend, though, it no longer does. Yesterday, during a Mother’s Day brunch, three wise women persuaded me not to remove the solar system. “It is part of who you are as a grandmother,” my co-worker in the grandma trade, Adam’s mom Sandi Repsher, said. “Painting over an accidental paint spatter is the usual thing to do,” Peggy Battin, a philosopy professor at the University of Utah, said. “Making a solar system out of it is unusual.” Marissa’s plea did it: “Mom, you’ve been making solar systems with us as long as I can remember. Remember when you came to our school and made a solar system to scale with a beachball sun in our classroom, a marble for the earth outside the door, the gas planets all along the school hall, and Pluto at the end of the playground?”

Prepped for painting, our living room is bare to the bone, fit only for the skeletal likes of Doña Quixote. How will we get it back to its usual over-the-top color extravaganza in time for the venerable Maria Shriver?

The solar system stays. Accordingly, when Maria Shriver and her team walk through our front door next week and should they look up, they will see on our ceiling a lasting manifestation of what it means to be a grandparent: the freedom to yield to fleeting pleasure rather than the obligation one feels as a parent to always focus on preparing your child for the future through sound clean-up habits.