Sometimes dementia can go like this: a sucky day with Doña Quixote in apogee

I’m in pre-publication euphoria—my book is getting such great attention. I am so happy about this. Why then, did my day-in-the-material-world suck? These are a few of the energy-draining events I remember: 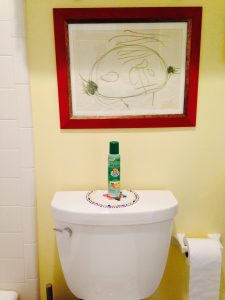 Left, The “natural citrus” bathroom spray lives on the toilet cistern, beneath a sketch that Newton made when he was 2 1/2. Right, My roll-on underarm deodorant lives in the bathroom cabinet on the shelf above my lipsticks.

2. After lunch when we were tidying up, Peter thanked me for putting the plastic stretch-wrap where he would be sure to find it while putting away the food. He was laughing. The wrap was in the fridge.

3. When my friend Debbie came to pick me up, I had her wait in the entrance while I looked for my watch, a silver-gray metallic one. I looked everywhere but could not find it. So I put on an old red plastic one that used to be my only watch and that I still love, but now hardly wear. When Debbie and I got to Kami’s house where other friends were already gathered, Riva remarked on the adornment on my arm. “”So fashionable,” she said, “that you are wearing two watches.” Yes, the metallic watch had been on my arm all the time and I had not noticed it when I put the red one on…

When one watch is not fashionable enough on its own, put on a second one…

I have long noticed that my brain works fine as long as I just stay in my head. It is when I interact with the material world that all the screws pop out. My mind just cannot stay on objects or tasks in the world—my thoughts retreat into my head and then I don’t pay any attention to what I’m doing. Mishaps such as those I described above go on all day long, many in an hour. It just eats up all my psychic energy.

Fortunately, their were compensatory events.

Tommy at Sky Nails gives me the victory sign after I agreed to have him put on nail polish—an adornment I usually refuse.

2. Our neighbor’s five-year-old daughter, Maya, came over to show me a photo of an amazing find in her back yard: a fairy wing. She ascribed it to the fact that she and my granddaughter Aliya had built a fairy garden in our garden some weeks ago. The garden attracted fairies, and one had shed a wing. We at last had proof that fairies exist! Since a breeze carried off the fairy wing as soon as Maya’s mom had taken the photo, Maya did not have to worry about a wingless fairy, because surely the breeze took the wing back to its owner!

3. I knew, of course, that Peter took a photo of me getting the pedicure. Later that evening he showed me the photo after he had “developed” a kirlian image that had appeared on the picture. Doña Quixote had apparently snuck into the nail salon with me!

A kirlian image reveals Doña Quixote in the seat next to mine at Sky Nails.

I laughed so much that I felt quite tender toward the Doña.  I know what she feels like sometimes. Anyway, the two of me made up. She’s not so bad to have around, after all, as long as Peter is here too.

She’s not so bad to have around, after all, as long as Peter is here too, whispering sweet, naughty nothings into my ear.

In addition, I love my nail-polished toes sticking from my first open-toed shoes since my right foot was badly damaged in a car accident twenty-five years ago.

Today Slate published an excerpt from my memoir MEMORY’S LAST BREATH: FIELD NOTES ON MY DEMENTIA Fashion/style vs dementia: a new RadioWest film about my trouble with clothes