Over the weekend Ouma tried writing you a letter for your fourth birthday, something profound, like the one President Obama wrote to his daughters in 2009, shortly after he was sworn in as the 44th president of the United States:

“These are the things I want for you—to grow up in a world with no limits on your dreams and no achievements beyond your reach, and to grow into compassionate, committed women who will help build that world.” 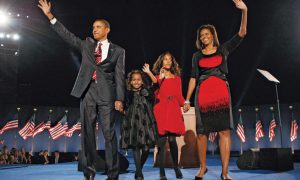 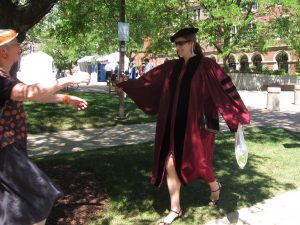 left: Obama inauguration 2013. Right. Gerda hugs Marissa after her graduation from the University of Chicago with a PhD in theoretical biochemistry (2012).

President Obama first took office long before you were born. You would only come into the world 4 days after the president’s second inauguration on January 20, 2013. At that time you and Mamma and Daddy lived in Chicago, in a student apartment just two blocks from the Obamas’ house. 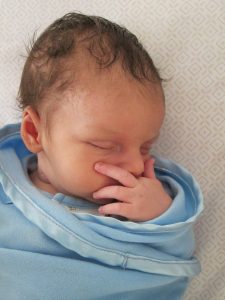 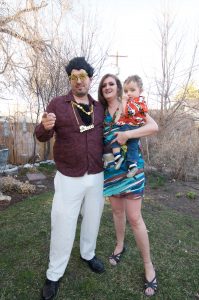 Left: Dante three weeks old. Right:  Adam, Marissa, and Dante on their way to a party just after coming back from Chicago to live 1 1/2 blocks away from Ouma and Oupa.

You knew about President Obama before you turned two: you would pick him out among the other refrigerator magnets in our kitchen and put a Santa hat on his head and cover his underwear with his Superman suit. Since you’re still a year or two away from reading chapter books, I can’t write you a letter such as the president wrote for Sasha and Melia. During President Obama’s turn, though, you have become old enough to understand much about the world–when you were 3 ¾ years old you declared that the adults in your life should not vote for Donald Trump because “he is a bad man.”

Ouma: Why is he bad?

You: Because he eats children. 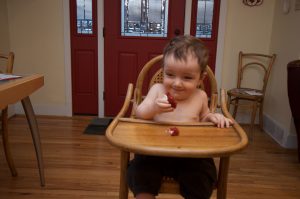 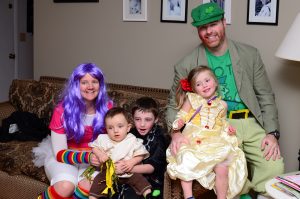 You like to distinguish between good choices and bad choices, good guys and villains. You love good-guy/bad/guy stories. At the moment your favorite is Oupa’s ongoing tales about Jo the Schmo, who always makes bad choices, and his friend, Willie the Fink, who tries his best to always make good choices. 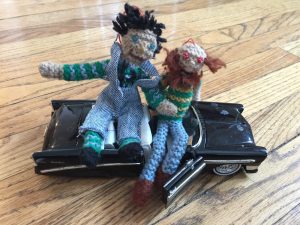 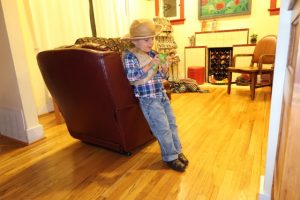 Left: Willie the Fink (green beady eyes) and Jo the Schmo (red beady eyes) in their getaway car. Right: Dante the Cowboy, loading his gun to fight for the good guys.

While Oupa tells about Jo the Schmo and Willie the Fink’s latest escapade, you play out the scene with the two pipe-cleaner figures Ouma made in 1981 when your mamma was 4 and Jimmy Carter the president and Ouma and Oupa and Mamma and Uncle Newton still lived in South Africa. 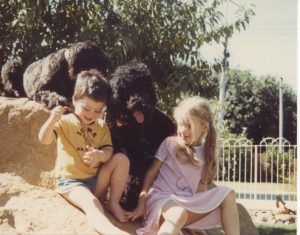 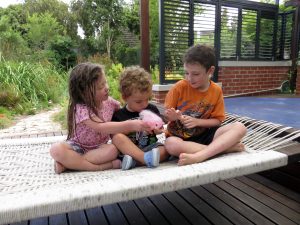 In tonight’s story, Willie and Jo have gone to  at 7-Eleven to buy a Slurpee, because Willie got 5 gold stars for reading every day. While they’re there, Jo the Schmo grabs a chocolate milk from the shelf and hides it in his pocket. Willie doesn’t notice. At the check-out, he pays for his Slurpee. They’re on their way out when Oupa the Cashier notices the bulge in Jo’s pocket.

Oupa: Jo, what is that sticking out of your pocket? 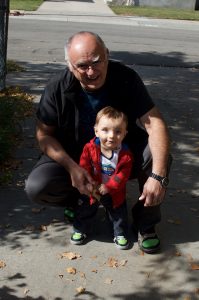 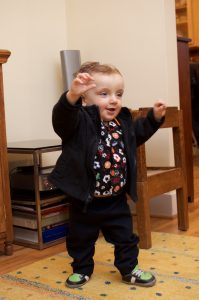 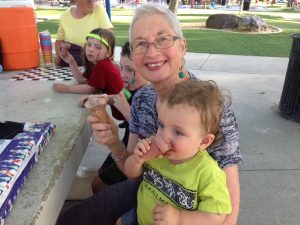 Jo does not answer, because you are gripping him by his tattooed arm and helping sprinting him to the black get-away-car, a 1956 Chevrolet Bel Air Two-door Hardtop that one of your daddy’s bachelor-years roommates left behind when he was carted off to jail. In your left hand, Jo has already started the car to make his get-away. Willie vaults over the passenger door and into the seat—an easy feat now that the car has been played with so much that it’s roof has come off and it is now a convertible. Despite Jo’s wild driving, which lurches the car from one side of the table-top to the other in giant sine curves, Willie gives Jo a piece of his mind.

Willie: Jo, how many times have I told that taking something that does not belong to you is wrong?

Jo, counting on his fingers: Er…there was that time when I liked Oupa’s hat and I took it home with me…

Willie: Jo, stop counting on your fingers! Put your hands back on the steering wheel, you’re supposed to be driving!

Jo does not answer, because the car careens over the edge of the table and crashes to the floor. Willie and Jo spin out in opposite directions, Willie landing under a chair and Jo under Oupa Piet’s kassie (cabinet). 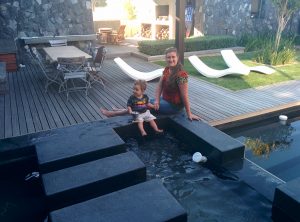 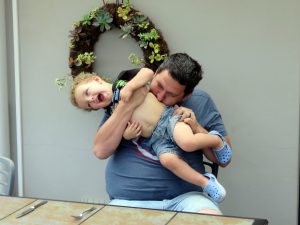 Dante and Marissa, Dante and Adam–while we were all visiting in South Africa.

Sounding an ambulance siren, you jump down, gather up Willie and Jo, and rush them to the hospital. While Ouma the doctor fixes them up, Oupa the car repair man gets the car on its wheels and tows it to the hospital. As soon as they have been bandaged and stitched up, Willie and Jo get back in the car. This time Willie  drives, because Jo dislocated his shoulder in the accident (just like Oupa did when he slipped on the ice the week before) and his arm hurts too much for him to drive.

Willie: Jo, don’t think that because you got hurt you’re not going to be punished for stealing that chocolate milk.

Willie: I’m sorry, but we’re still going to the police.

Willy: Then you shouldn’t steal. 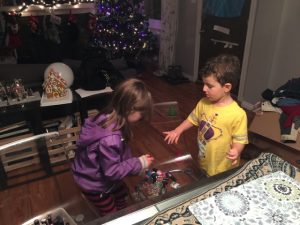 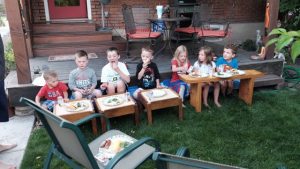 Willie drops Jo at the jail in the yellow bowl on the kitchen toy shelf. Ouma the jail nurse takes Jo to his cell and props Jo up with pillows on his mattress so his arm doesn’t hurt so much. After a sentence of at least half a minute, Jo is called before Judge Oupa.

Judge Oupa: Jo the Schmo, what do you have to say?

Judge Oupa: You say that every time, Jo the Schmo. This time I’ll teach you a lesson. You have to do all your chores PERFECTLY this week: take your plate to the dishwasher, run to put on your pajamas the minute your Daddy says its bedtime, and pick up your toys before going to bed. And when you get your allowance, you have to take it to the cashier at 7-Eleven and pay him for the chocolate milk.

Jo the Schmo: But Judge! I was saving up for a Slurpee!

Judge Oupa: Jo, if you want a Slurpee, you should read every day like Dante and Jo the Schmo. That way you’ll get five gold stars and you’ll get your Slurpee. But this time, your allowance goes to 7-Eleven for the chocolate milk—that’s your punishment for stealing!

Willie the Fink and Jo the Schmo goes home, and on the way Willie let’s Jo have a long, gurgly sip of his Slurpee. It was still ice cold.

Jo got a brain freeze. 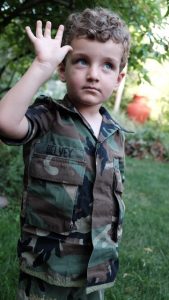 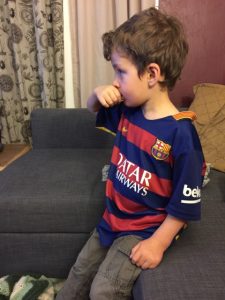 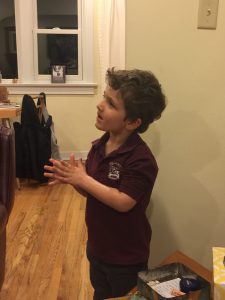 Left: Dante in the outfit Grammie Sandi made out of Adam’s army uniform from when he was fighting bad guys in Iraq. Middle: “Don’t talk to me! I’m figuring out something on Super Why.” Right: Dante c0ntemplates whether to make a good or bad choice.

Which brings Ouma back to the present, the era of Donald Trump. For this era, and that of all the other presidents who will mark off your lifetime in four-year (sometimes 8-year) strips, I wish that you keep on being one of the good guys. That you will keep on thinking deeply on complex issues, laughing so much at least once a day that you cannot even talk, and dispensing your crushing hugs and feather-flutter kisses on the cheek to everyone you love. And may you have empathy with even the bad guys, and keep giving them a sip of your Slurpee, because sweet forgiveness does sometimes turn bad into good.