Latin dancing is not usually considered a solo act. However, should you step through our red front door and come upon my husband at the kitchen sink, strutting his stuff to a bachata song while doing the dishes, it would appear as though no one or nothing else were required to increase his satisfaction: the sway of his body, his lip-syncing of the words he knows, the ¡uno-dos-tres-tap drum beats and guitar syncopations totally enter his being, so that—like Bernini’s Saint Theresa upon being pierced by the angel’s spear—the “soul is satisfied now with nothing less than God” (pp. 67-8). I hasten to say that Peter’s god—who has a robust sense of humor—partakes of the angel’s wickedly pleased expression as much as it does of the saint’s transgressively sensual swoon. 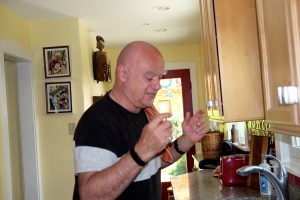 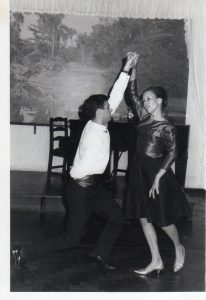 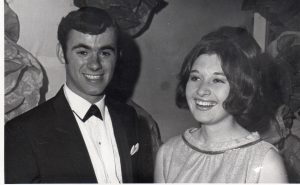 Peter dancing with one of his teachers, a Ms. Joubert whose first name he can’t recall. Peter and Gerda at a University of Pretoria, or Tukkies, dance. I wore a dress my sister Lana had made and passed on to me. My regrettable 60s hairstyle took many hours in curlers, much teasing (taking hold of a small strand of hair and pushing the hairs toward the scalp with a comb from the bottom up), and half a can of hairspray to achieve. 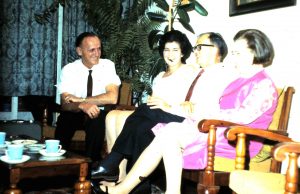 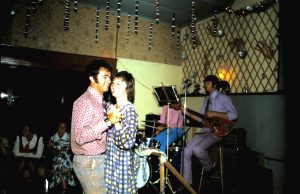 Peter’s and my parents in the living area of the apartment where Peter and I moved away the furniture and he taught me to dance. Peter and Gerda dancing in Mossel Bay, Western Cape Province, on New Year’s Eve at start of 1971(?)

I met Peter just as he was giving up his dance lessons in favor of more study time. I believe that his dance deprivation made someone as unadept as me into an acceptable partner! Though I had learned basic ballroom dancing at school—where the girls who knew the steps taught the rest of us—from my first dance with Peter onward it became apparent that, if I were to spend much time with him in future, I would have to up my game many, many notches. I never even had to ask if he would teach me—at the first possible opportunity in the small apartment where he lived with his parents, he rolled up the carpet, put a record on the stereo he had built himself with vacuum tube technology, booming the music through the thigh-high wooden speaker boxes that his Dad had lovingly crafted and finished with a wavy routed edge and a glossy shine. 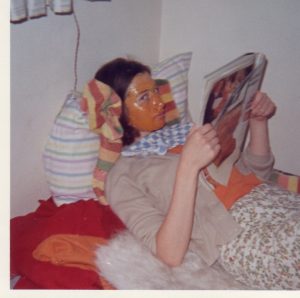 Left, Going dancing in the sixties of our university years was a serious business: above, I applied an egg yolk face mask to make my skin baby-soft for that evening’s bokjol, or university dance. Right, All gussied up in a dress I made for the occasion. I changed the originally conventional pattern by leaving one side open to create a thigh-high slit.

My dance lessons in Peter’s home started with the familiar ballroom classics that—together with the London jive and freeform gyrations to popular beats—were then the staples of Tukkies dances: the waltz, Vienna waltz, quickstep, cha cha, rumba, samba, and charleston. Under Peter tutelage, these forms acquired counts, specific patterns, and plenty of high-armed, head-spinning  turns. While I loved all of the dances, the one that thrilled me the most was the fast-spinning Viennese waltz: I have vivid memories of us twirling to the breakneck tempo of “Delilah” along a path (visible only to Peter) that weaved among the other couples, most of whom did not seem to travel much from the spot where they were dancing. After turning and turning me in the same direction until the vortex in my ear canals had built to a maelstrom, Peter would execute a change step to reverse the direction of rotation and unwind my dizzynes. Wherever he found a large enough space, he would swoop me into a gravity-defying leap that made my childhood dreams of flying come true.

While we still lived in South Africa, Peter and I kept on dancing whenever possible–fortunately possibilities for social dancing that included ballroom music was far more abundant than at the same time in the US: birthday parties, weddings, and club outings with friends were a regular part of our lives, even after our children were born. Once we had emigrated to the US in 1984, though, dancing as we knew it was a thing of the past. Fortunately we discovered a brand-new opportunity at the wedding of one of Peter’s co-workers, Manny Jaramillo: it was there that we first tried our cha-cha style steps to copy dancers doing the “bachata”and our mambo and rumba steps to approximate the “salsa.” The bachata dance originated in the Dominican Republicin in brothels and and other places of ill repute during the first half of the 2oth century and came to respectability there only during the 1960s.  A 1980s and 90s wave of emigration from the Dominican Republic brought the dance to New York.

While the term “salsa” refers to a number of different dances of Latin-American origin, it also refers to a particular rhythm and dance style, “the salsa.” The salsa dance hails from Cuba and Puerto Rico, merging into one distinct style during the 1970s in New York when it encountered the disco craze. By the time Peter and I encountered these dances at Manny Jaramillo’s wedding in the late 1980s, they had spread to dance clubs and studios in Salt Lake City as well. Peter immediately signed us up for lessons. 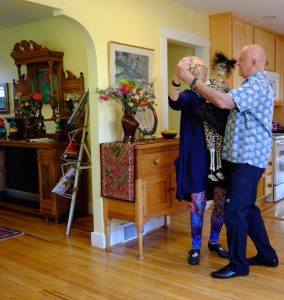 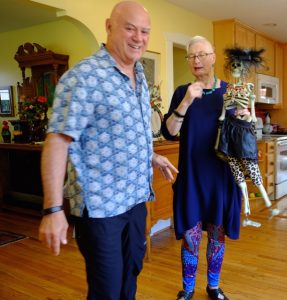 As we entered into serious dancing the late 80s and early 90s, we made many friends with dancers from various Latin countries, whom we encountered everywhere we went. Many of our friends, too, took lessons and celebrated these dances at weddings and other parties.

The problem with dancing salsa for adults with jobs and family responsibilities is that the action in clubs really starts from 10 pm onward. As my and Peter’s jobs became more challenging and time-consuming over the years, and when he worked out of state for 3 years, our dancing became more ad hoc and we stopped learning new steps. We also got older and—hard as it is to admit—had less energy. By now I really can no longer function during the post-midnight hours of Peter’s favorite activity, and even he acknowledges the vicissitudes of aging. (I think, however, that if I were not around, he would still dance the night through—and gladly suffer the consequences the next day.)

Our current solution to keep dancing came in the form of giving up clubs as the venue, and settling for the more humane hours of dance studio lessons and social dancing—activities that happen in the early evening and are done by 10 am. (Weekend social dances, though, start at 10 pm and go past midnight—we have done only a few of those, and I would be completely down the day after.)

In addition to my and Peter’s classes, he has agreed to partner Marcella Kirschbaum (a friend of one of our made-in-America family members, Susan Anderson) in a beginner salsa class—in our circle of friends and acquaintances he is famous for being a fabulous dance lead. I tell him that, despite of the effects of decades of feminism on us females’ minds, dancing is still an area where his patriarchal tendency to be bossy is beneficial: female followers love getting strong, no-nonsense signals from their male leads. As Peter says, “I grew up in a time when the man was boss and the woman was grateful.” His maxim clearly still holds for the dance floor! 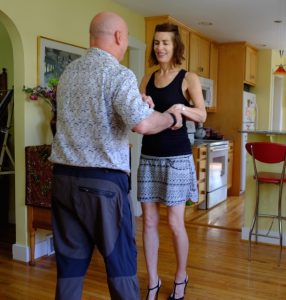 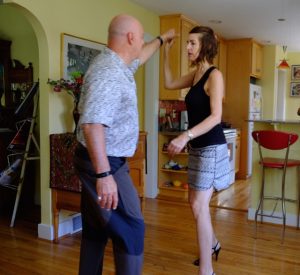 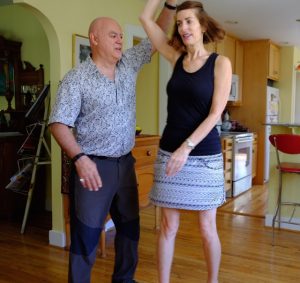 Peter and Marcella practicing their salsa steps in our dining room.

Between Peter and me, he is definitely the one who has the most mental stamina when it comes to dancing for hours. While his spirit waxes strong, his body wanes much like mine. Accordingly, between the two of us we have one sharp brain that still learns new moves relatively easily and another one that is very slow to understand the rapid instructions steps; and two bodies somewhat equally subject to the aches and pains of aging. For about a month now, Peter has had trouble with a painful foot, which has not gotten much better despite daily doses of ibuprofen.  A day or two ago he succumbed to my offer of massaging his foot. I sat down across from him as he half-reclined in an easy chair and placed his foot on the towel on my lap. I asked him to point to where his pain was. He indicated the large bone just below the inflamed area shown in dark red on the diagram. 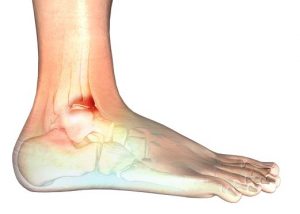 I corrected him. “That is not your ankle,” I said. I cupped the area of his foot furthest from his toes in my hand. “This is your ankle.”

“You’re cupping my heel,” he said.

I looked at the disputed areas of his foot and could not make my head believe that the leftmost part of his foot was a “heel” and the bone below the inflamed area the “ankle.” I took his word for it, though, and tried to get my head around the his assertion. It took until after I had massaged his foot for the words “ankle” and “heel” to each return to its designated referent in a way that made sense in my brain.

So: imagine the challenge of learning new dance steps for someone who does not even know the words for dance-relevant parts of her body! Moreover, I have trouble interpreting language when spoken in long paragraphs, as during our lessons and studio practices. A non-native English-speaking instructor speaking at a pace designed to match the fast-moving music makes my understanding worse. Fortunately Peter is a very patient teacher: during the lesson, he leads and molds my body parts into the right places. At home, technology is a helpful supplement, as long as Peter again translates what his eyes see in the videos of our instructors dancing into slow words for me: he breaks each move into small parts and teaches them to me one-by-one.

Today, still, dancing with Peter is the only physical activity other than gardening that sometimes brings me to a point of transcendence. (I’m excluding sex here, because I think the pleasure one gets from it is immanent (the divine is manifested in the material/biological world) rather than transcendent (your soul rises beyond ordinary states). I think the jouissance that, for (lucky!) me, is just about guaranteed through a series of actions practiced over a lifetime between two people—is not (necessarily) spiritual, but of the body. Long live the pleasures of the body!

St Theresa’s, in fact, makes her ecstatic religious encounter with God through the angel sound like it, too, is very much of the body:

“I saw in his hand a long spear of gold, and at the iron’s point there seemed to be a little fire. He appeared to me to be thrusting it at times into my heart, and to pierce my very entrails; when he drew it out, he seemed to draw them out also, and to leave me all on fire with a great love of God. The pain was so great, that it made me moan; and yet so surpassing was the sweetness of this excessive pain, that I could not wish to be rid of it. The soul is satisfied now with nothing less than God. The pain is not bodily, but spiritual; though the body has its share in it. It is a caressing of love so sweet which now takes place between the soul and God, that I pray God of His goodness to make him experience it who may think that I am lying.”

I hope that, long after I can no longer dance, Peter will still find partners to set him “all on fire with a great love of God” on the dance floor. And wherever else his jouissance resides, be it immanent or transcendental.