In my pre-dementia life, I used to travel to broaden my mind and expand my world. Nowadays my favorite place to go to is the Las Vegas Strip that, despite its representations of  Venice’s Grand Canal and St Mark’s square, the village of Bellagio on the shore of Lake Como, and Caesar’s Rome; Egypt’s Great Temple of Rameses II at Luxor; the mythical Britain of King Arthur and his knights; and the right and left coasts of the US in New York, New York and Planet Hollywood, it really adds up to a very small world—it is not even a city: even though for most people the Strip IS “Las Vegas,” the world’s largest conglomeration of buildings designed exclusively for entertainment actually is a nameless, unincorporated area of real estate located in Clark County, just south of the actual City of  Las Vegas. 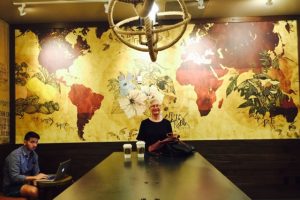 In Las Vegas, I find the whole world in our hotel’s Starbucks…

If I had not already known that the world of travel had become too big for my dementing brain to encompass, this fact became clear to me when we went to Europe last year. While I enjoyed it very much at the time and still think it was a wonderful trip, I don’t think I would do a journey that big again. Peter agrees with me—the rewards of exploring new places have become too small to warrant the enormous output of energy it requires. On the contrary, the pleasures of going to a familiar and nearby place for a short while still outweigh the effort it takes. This time to Las Vegas we, in addition, chose the comforts of flying over the stresses of an 8-hour road trip with only Peter driving. It was luxurious to leave home at 9 am and, an hour or so later, arrive in Vegas at 9 am! 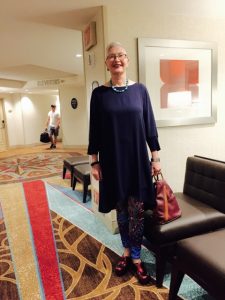 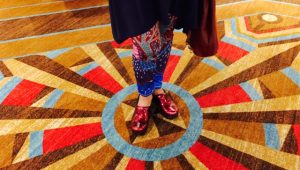 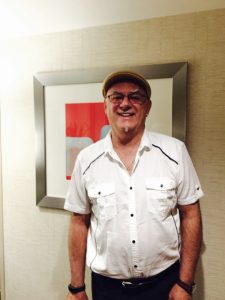 Gerda and Peter in our 33rd floor wing of the hotel. What does it say about my fashion style if my leggings match the hotel’s carpet?

Once we had checked into our hotel—Treasure Island, 3 nights free!—Peter explored a few other places up and down the strip, but my domain was almost exclusively the Fashion Show Mall. The furthest I ventured was across the street via a traffic light (with Peter as the lookout for when it was safe to walk) and over two different over-the-road walkways to get to the Venetian hotel. On our way out, we took pictures of each other in out hotel at the escalator/stairs leading to the street. While we were trying to pose for a selfie, a woman came up to us and offered to take a photo of us both. She was one of three sisters visiting from South Carolina. 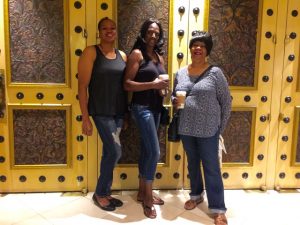 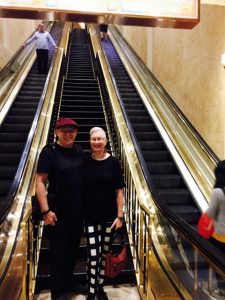 Gorgeous Priscilla, Shela, and Annie: sisters from South Carolina. The photo they took of Peter and me. 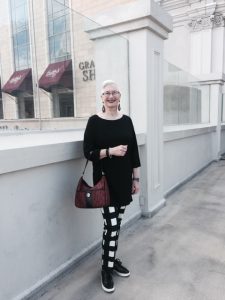 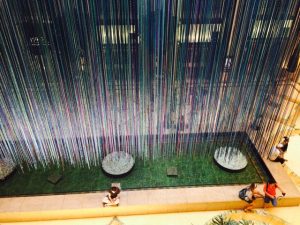 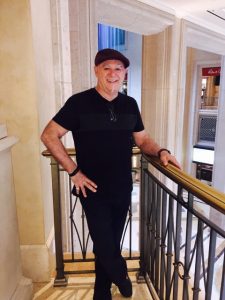 Peter and Gerda explore the inside of the Venetian hotel.

One of the reasons Peter took me to the Venetian was because—since we started dancing at least twice a week— he has had a big project looking for a new dance dress for me. The day before, he sent me this photo of a dress he saw at the Grande Canal Shoppes: 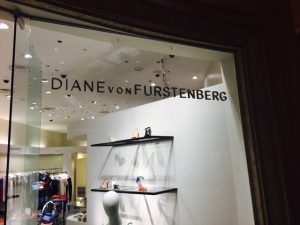 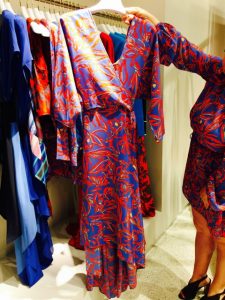 Unlike me, Peter does not shy away from the designer brands.

While I loved the look of the dress on the hanger, it did not look good on me—it emphasized a waistline I no longer have. Fortunately we found another one—on sale to boot! Just as well, because Peter was not leaving Las Vegas—or the fancy store—without a dance dress for me! Were his gambling winnings burning a hole in his pocket? 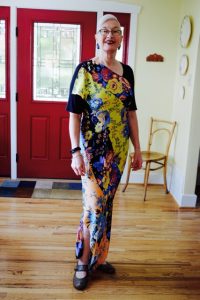 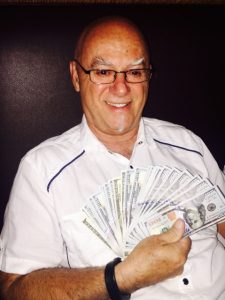 Other than shopping, I involuntarily spent time talking with people. There are just so many nice people in the world. Whether in a department store, or a restaurant, or just while I was walking around, people would meet my smile and sometimes just start a conversation. Or sometimes I would ask them where they’re from or give them a compliment, and a lovely interval of communication—dare I say communion?—would light up my day. 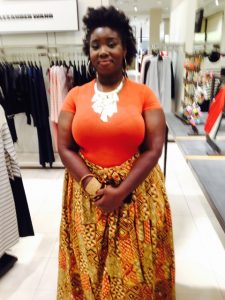 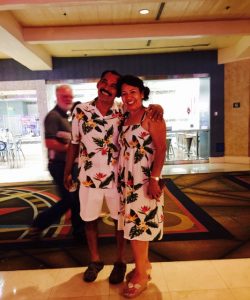 Left: Beautiful Shear Gibbs works in the fashion department at Neiman Marcus. She makes many of her own clothes and has adopted a style that honors and celebrates women of African origin. A friend who travels to buy jewelry got her this unusual, handmade necklace. Her warmth won me over at first greeting. Right: Peter and I met this couple in our hotel’s casino. They are from Latin America (sadly I cannot remember which country) and had come to Las Vegas for a wedding. Their daughter, who had come to the same event from Hawaii, brought them these matching outfits.

Las Vegas is my oyster. I revel in the confined space of the air-conditioned mall where I can’t get too lost. If I get confused, I can always ask someone the way to Neiman Marcus. Once I’m there, I just have to walk straight through it and I emerge into the outside heat right by the escalator to the walkway that takes me across the street and into our hotel. If that fails  (and it has, once or twice) I just call Peter and he either guides me home or comes to get me.

With a husband like Peter, who needs the Magic Mike Show, Las Vegas’s third-millennial challenge to the Chippendales? 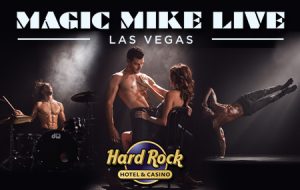 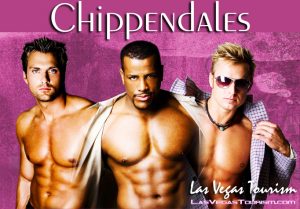 For three whole days, I had the freedom to come and go as I wanted to, all on my own. And when, after a long day, I sensed that my inner werewolf was about to emerge, like that wild boy Max I just stepped into my private boat and waved goodbye and sailed back over a year and in and out of weeks and through a day and into the night of my very own room where I found my own “wild thing” waiting for me—and, like Max’s supper, he was still hot…