Doña Quixote wants to know: who am I making these memories for?

Dementia support websites often urge relatives of people with dementia to compile photo albums of the person’s past as memory triggers or conversation pieces. 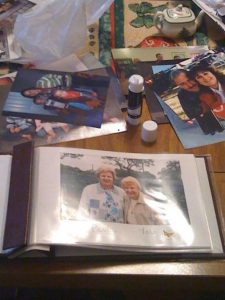 In our house, I used to be the person in charge of the photo albums —back in the day when photos still had a final form on paper. As the digital world encroached, Peter took over our visual memories. He has created a timely storage systems for our photos each time there was a big technology jump toward easier management: retrieving a photo for my blog, accordingly, is vastly easier than it used to be when I had to dig one out of a photo album and scan it for newsletters to South Africa and other writings. My frequent engagement with photos these days is complex: I can’t help but think about the time when neither the photos nor even the living person before me will fail to trigger any relevant memories. During actual time spent with my beloved family, a great sadness sometimes overcomes me in the midst of family togetherness. In fact, over this past 4th of July weekend I experienced the making of memories with Peter and our children and grandchildren as happening at the intersection of pleasure and pain. But I always like telling a story, so here is the backstory to Peter’s fabulous photos below.

Leading up to the 4th of July weekend, there was Kanye and Aliya’s lemonade stand: the two little enterpreneurs made over $40 PROFIT in 2 hours. It was hot, though, and they really worked the passing crowd: they took turns jumping up and down with their sign in the sun where they could more easily be spotted than from the shady place under the tree where they had set up their stand. While Kanye held the sign, Aliya did backflips and cartwheels from her gymnastics routine. In addition, Kanye did hours of business-related work ahead of time when he built the stand and accompanying chair out of scrap wood entirely on his own. 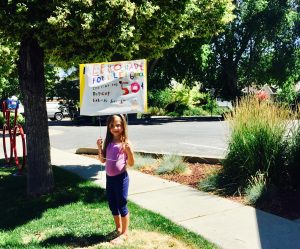 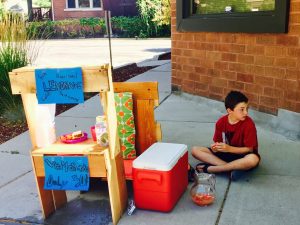 On the morning of the 4th, our family got together in our neighborhood for the South Salt Lake parade. A big feature of the event is that the people in the parade throw candy from their cars or floats to the kids cheering on the side. While I mostly sat on a chair in the shade to watch, I did jump up now and then out of avarice: when one of my grandkids failed to see some candies that clearly fell in his or her “personal space” and a kid from another tribe was racing toward it, Ouma was spotted ignominiously turning her grandchild’s head toward the object of tribal warfare and frantically urging them to win the prize for OUR family. 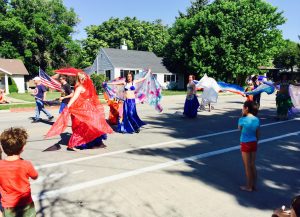 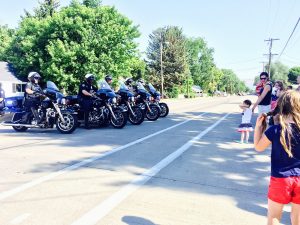 My avarice about something of such negligible value as candy of course made me think about patriotism. Because we emigrated in our mid-thirties—midlife from today’s perspective—and eventually became American citizens, I found it impossible to pledge allegiance to the flag of the United States. While, politically, I had no sentimental feelings about abandoning my South African citizenship, I was very skeptical about the whole notion of pledging allegiance to a country, particularly because by then I had been disillusioned not to have found Martin Luther King Jr’s America after departing South Africa mostly for its despicable racial policy. During our neighborhood parade, I felt a surge of love for the US at the sight of the many flags such as I had never experienced before. Nevertheless, when the Starspangled Banner rang out from the accompanying festival in a park nearby where the parade would end, all I could do was stand respectfully without putting my hand on my heart. Why can’t I do that? If I act with integrity, as I always try to do, this manner of showing respect is not yet truth for me. But I was truly happy when the music and flags kindled a patriotic flame in my heart. 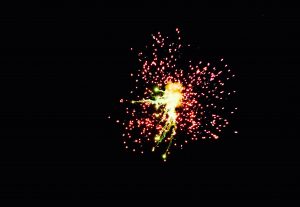 To make a silly segue: talk about flames! At sundown in the valley, our family again gathered in our neighborhood, this time at Marissa and Adam’s house—as we say in Afrikaans, the kids were out of their skins about our own little firework display in the street. If I were to act in integrity in this case, I should have stayed at home, because I really believe that it is time for private fireworks to stop, particularly in our dry, flammable, and already fire-ridden state. I roundly admit that I was willing to forgo this principle because of the expressions of delight, fear, and wonder that I expected to see on my granchildren’s faces. I was not disappointed. (Did I mention that I myself supported the capitalism associated with our national holiday by buying two firework items myself? Yes, I could not resist a package of tanks that the grandkids of course set up in a street battle and a packet of “bloomflowers” that made them dance. ) 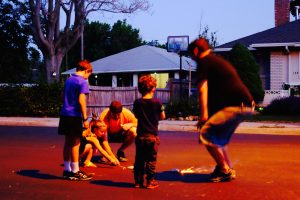 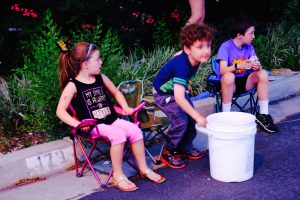 Above: Sometimes all 3 grandkids were in the street taking turns at lighting the fireworks, sometimes they sat by the side of the road near the “safety bucket” filled with water. Below: Across-the-street neighbor was going to be sensible and not buy fireworks this year, but as soon as the Saunders tribe set up in the street, he dashed off an came back with a HUGE contribution to the show. Below left, Trevor with a “flame-thrower,” Kanye emulating Trevor, who—like Kanye’s uncle and godfather Adam—is an Iraq veteran. When it comes to patriotism in regard to veterans, my heart swells with gratitude and admiration for each one of them. 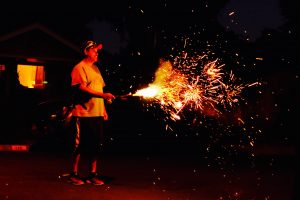 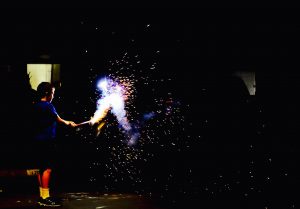 As if the 4th did not have enough going on in our family, I fitted in another grandkid activity between the morning’s parade and the evening’s festivities: going against my belief that capitalism needs a LOT of work to even approach a fair shake for every American—including kids who lived in neighborhoods to dangerous to even practice the enterpreneurship of a lemonade stand.

Given the privileged life our family is fortunate to have found in our corner of America, Aliya still had $14 left from her lemonade stand profit. It share was burning a hole in the sandwich baggy in which she kept her spoils. She told me about her stash of money during the morning’s parade. That afternoon, Newton was taking care of Aliya while Cheryl was at home studying. When Peter and Newton concocted a scheme to go fly their drones in the park near our house, Aliya was going to go with them—Aliya has never seen a park whose open spaces did not seem eminently suitable for a gymnastics show, so she was totally game to go. Ouma, however, gave up her principle of not maintaining traditional gender roles and decided to woo Aliya away to the mall for a shopping tip.

I have very few friends who like to spend as much time in the mall as I do. I did not know what Aliya’s shopping stamina would be, so my plan was for us to go to Fashion Place Mall by Uber and return whenever she had had her fill or her money was spent. I did not realize that my little granddaughter had inherited her Ouma’s shopping genes. She was still ready to continue long after her money, as well as her Ouma, was finished. We had a most wonderful time. 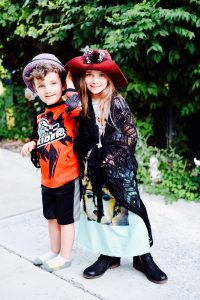 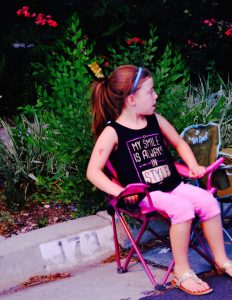 Left, here she and Dante are after raiding my closet when they visited for grandkid night last Wednesday. Right, how is it possible that my 7-year-old granddaughter can appear so tween-like in the outfit she and Ouma bought with her money, slightly supplemented by Ouma’s?

While at the moment I have not yet found any consolation in relation to the s00n-to-be-lost memories I am making, I find great joy in the transmission of my—and, of course, Peter’s—genes into, by now, two further generations. I am so privileged to still know that my grandchildren share in my love for intellectual adventure, the written word, scientific world view, and flights of the imagination whether they be related to clothing and other arts (Aliya, 7), making up stories (Dante, 4) and the future worlds of science (Kanye, 1o). 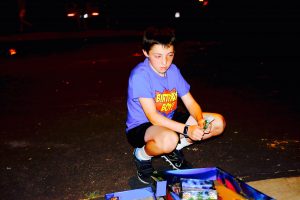 Kanye Newton Saunders. “To myself I seem to have been only like a boy playing on the sea-shore, and diverting myself in now and then finding a smoother pebble or a prettier shell than ordinary, whilst the great ocean of truth lay all undiscovered before me.” (Isaac Newton)