Dementia can go like this: Prologue to the story of Edith Buchsteiner Schmidt, a never-met, yet well-known, acquaintance

For those of us lucky enough to encounter a soulmate at all, such a person usually comes but once in a lifetime. For Edith Buchsteiner Schmidt, true love came twice: first, when she was 16 and met her husband-to-be, Helmut Schmidt, at a youth camp in Germany; second, nine years after Helmut’s death, when she was 75 and met the would-be partner of her autumn years, George Haley at a seniors’ club in Canada. Edith is now 86 and is, in a manner of speaking, still with George—even though she no longer knows his name: at the age of 79, she was diagnosed with Alzheimer’s. 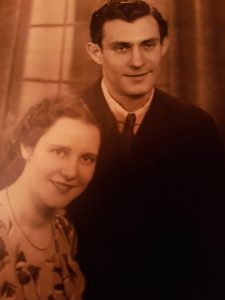 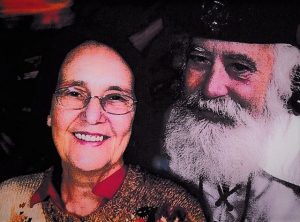 If I have never met Edith, how do I know so much about her?

During the early 1980s when 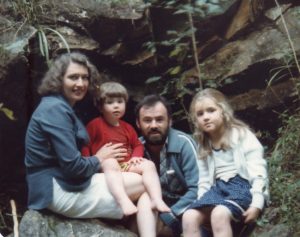 1) GERDA and 2) PETER lived in Johannesburg with our two pre-school-age children, 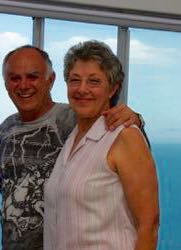 Peter’s cousin, 3) RIEKSIE STADLER, and her family lived in Pretoria.

One day Rieksie’s twenty-something son, 4) WERNER STADLER, came over from Pretoria on his blue Moto Guzzi to visit us in Johannersburg, with 5) INGRID SCHMIDT on the back. 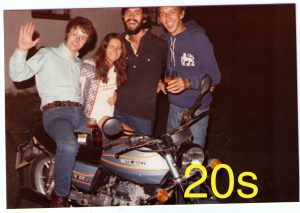 Ingrid (2nd from left) and Werner (on the very right) with friends when they were in their early twenties and shortly after they met (Easter 1981).

Werner was then studying metallurgy at the Pretoria Technikon and had a job placement at what was then the South African Institute for Metallurgy (now MINTEK). Ingrid had freshly graduated from McGill University in Montreal, Canada, with a bachelor’s degree in metallurgical engineering. , and had recently accepted a job in South Africa as a metallurgical research engineer in the same lab as Werner. In Ingrid’s words, they “fell head over heels in love.” 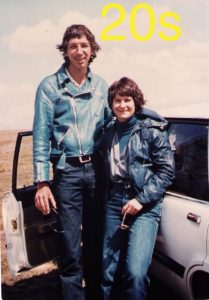 Ingrid and Werner at an air show

Soon after Peter and I and our kids left South Africa in 1984, Werner and Ingrid had a baby daughter, Sonja, who was born on Nelson Mandela’s birthday, July 18th, 1985. 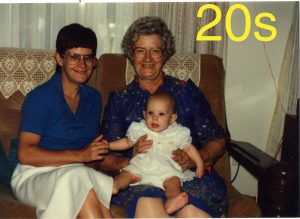 While Ingrid was still in the hospital after having Sonja, a second State of Emergency was declared in South Africa. “I became like a mother lion,” Ingrid remembers, “who needs to protect her young.” Like Peter and I, she was “afraid of the future.” Like us, she “did not want Sonja to grow up with funny notions about race.”

Above, scenes from the 1985 uprising in South Africa that Ingrid mentions. Peter and I, as brand new immigrants, watched the chaos and repression on TV with a mixture of guilt and relief. Less than a year after Sonja’s birth, Ingrid returned to Canada, where her family still lived, with almost-one-year-old baby Sonja. Werner followed five months later, as soon as Ingrid got the paperwork approved to sponsor him.

Even though our families were now only 2,000 rather than 10,000 miles apart, Peter and I did not see Ingrid and Werner (who separated four years after returning to Canada) for over three decades. However, through cousin Rieksie, we stayed up to date with their family after their immigration, learning that they were amicable co-parents even as they separately went on with their lives. Werner had a son Sebastian in a new relationship, their daughter Sonja grew up, earned a PHD, married her soulmate Martin, and they had a baby of their own. 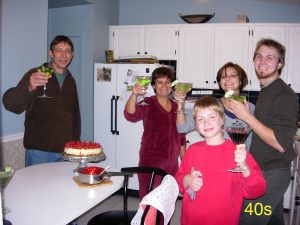 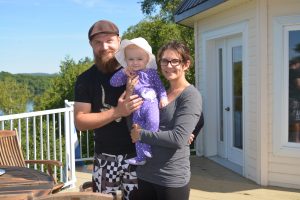 Above, amicable exes: From left, Werner, Ingrid, their daughter Sonja and her now-husband Martin, and (red top in front) Sebastian, Werner’s son from another relationship (early 2000’s). Photo on right, Martin, Sonja, and their baby daughter, Kyla (2015). 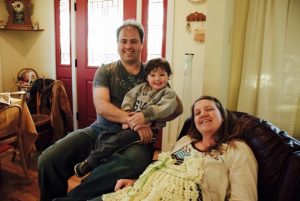 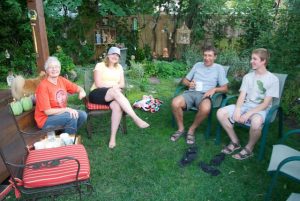 Above: FAMILY CONNECTIONS CONTINUE: Left photo, Newton, Kanye, and Cheryl. Cheryl models—on her baby bump–a knitted dress for Aliya that cousin Rieksie made and sent from South Africa. Right photo, Werner and Sebastian visit us in Salt Lake City from Canada (2010), baby Aliya on the grass in the middle. Sebastian tragically died in November 2014, sadly before his half-sister Sonja could tell him that he was going to be an uncle. Soon after Werner and Sebastian’s visit (early 2010s), Ingrid was on a business trip in Salt Lake City for her company Rio Tinto, and came to our house for dinner one night. That night we learned about the love of her life, her partner of 18 years, Ted Fillery. 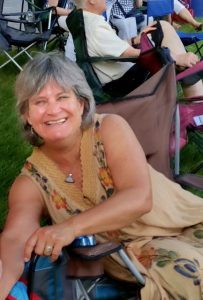 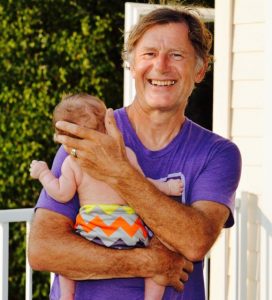 Ingrid first met Ted while camping in 1993, when their daughters were 8 (Sonja), 9, and 10 years old. “The campsite was rampant with frogs that year,” Ingrid recalls, “and the girls had a whale of a time, especially at the water faucet where the frogs seemed to congregate. We met at the same campsite the following year and then it was another 6 years before we met again and started dating.  We have been a couple for nearly 18 years now, even though we kept separate households and used to see each other only on weekends. Ted used to take the commuter train out to Oakville from Toronto every Friday and go back to the city on Monday mornings. Fortunately his teaching schedule at the University of Toronto, where he was a Professor of oral microbiology in the School of Dentistry, was really flexible. In 2007, I moved to Montreal, and he flew in every weekend. It was only in 2010 that Ted and I started to live together under one roof when he retired and followed me to Montreal.” 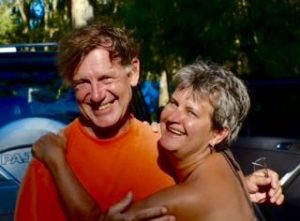 Ted and Ingrid looking very tanned in Australia during the year Ingrid had a work contract there.

During all the years Ingrid has been a member of our extended family, I never knew or thought to ask about her parents. The first time I heard about her mother was when Ingrid wrote to me (March 2016) after I launched my website. “Thank you so much for helping me to understand what my mother went through,” she said, “and what is probably waiting for me too, in about twenty years or so when the visible signs will set in. My aunt and my grandmother were the trailblazers… and my mother is now in a much more advanced stage of Alzheimer’s than you are. We take comfort in small pleasures.”

Over the past year-and-a-half, Ingrid and I have corresponded regularly–that is how I learned about her extraordinary mother, 6) EDITH BUCHSTEINER SCHMIDT. Edith is now 86 years old and lives in a small rural community called L’Epiphanie in Quebec, about 45 minutes from Montreal. Her home is a care center called Phare de Paix, where all the residents have Alheimer’s disease. George lives in Trois-Rivières, an hour’s drive from Phare de Paix. Ingrid and Ted have retired to a small town near Mont-Tremblant, about two hours away. The both regularly visit her. Even though Ingrid “is not sure that Edith recognizes me, I don’t believe she reacts to me as she would to a stranger. She allows me to dress her, take her outside; she trusts me.” The staff also reports that Edith “seems much happier” when George visits. 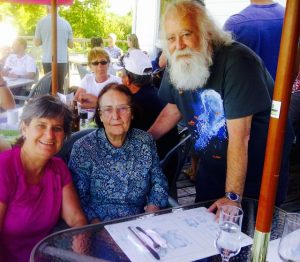 Edith in the middle, between her main two caretakers/supporters, Ingrid and George.

In subsequent posts, I will tell the story of Edith Buchsteiner Schmidt, her love commitment to Helmut Schmidt when she was 16; her striving for art and beauty from a fish market in Berlin to a diploma in fashion design; her journey in 1956 from Berlin, Germany, with Helmut and her 5-year-old son Reinhart to a series of trailer villages in Canada at the sites where Helmut worked as a technical illustrator on hydroelectic dam projects, including, in 1959, one on the Bersimis River in Northern Quebec where Ingrid was born; their move to “a brick house” in Trois Rivières, where she designed and sewed her family’s clothes, taught drawing and painting, participated in art shows, and earned a bachelor’s degree in Fine Art; the early death of Helmut from a stroke after a heart attack (1997); the meeting of her beloved George 9 years later, in 2006; and her final home in Phare de Paix, “Beacon of Peace.” 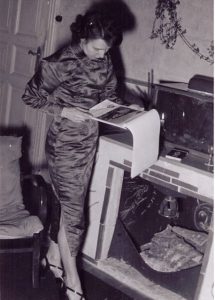 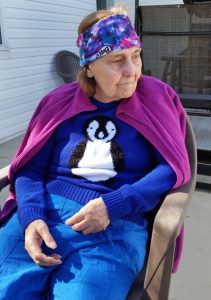 Left, During the war when Edith was 12 year old (1943), she was evacuated to Denmark “to briefly escape the horrors of war-torn Berlin. Her Danish host “Dad,” a brewmaster who traveled widely, obtained silk “from the orient” that he gave to Edith as a gift. Back in Berlin after the war, in she made the dress from the oriental-via-Denmark silk.  Right, Ingrid still honors her mother’s former love of bright, coordinated colors when she chooses clothing for her.

Until next time, something beautiful for Edith: 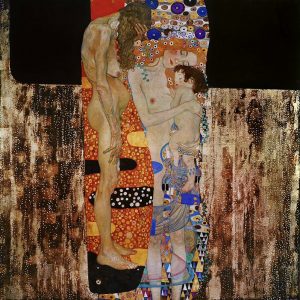