On this Thanksgiving Day, I Am Grateful to Be an American and Regretful about Lessons of Inclusion Our Nation Has Not Yet Learned

As a “new” American of a mere 24 years, I admit that I will never “get” Thanksgiving in the same way that most American-born citizens do. For example, I have never cooked a turkey on “Turkey Day,” instead preparing South African staples from my childhood such as a leg of lamb and a meat- or chicken pie. Also, the fourth Thursday of November has never had any special meaning for me, since our family decided, while Peter and I were working our respective stressful jobs, that we wanted a day of rest before preparing a big meal, and accordingly moved our celebration to a day after the designated one. From the time we acquired American-born in-law children, our holding off has also served the purpose of giving our in-law-children the opportunity to spend the “real” day with their families. 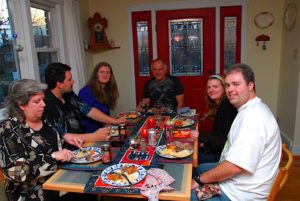 Thanksgiving 2008. From left,  Sandi (Adam’s mom), Adam, Marissa, Peter, Cheryl, Newton. (One-year-old Kanye in his high chair is not visible beside Cheryl–see a photo of him below.)

What I learned from our first Thanksgiving onward was that the celebration was about inclusion. As new immigrants, we never lacked an invitation to the turkey-with–all-the-trimmings feasts of friends or neighbors. Thanksgiving, whatever the particulars of how it is celebrated, is about putting aside political and other family bugbears for at lease the duration of a multi-course meal to memorialize our (admittedly mythologized) common origins as European outsiders and Native Americans who made a potluck of 5 roasted deer (Native Americans) and the bounty of a successful harvest (Pilgrims and Puritans) after Tisquantum, a member of the Wampanoag tribal confederation, taught the immigrants how to grow “the Three Sisters,” corn, beans and squash. Even 3-year-old Dante knows about Squanto who taught the Pilgrims “how to make corn on the cob.”

One-year-old Kanye (2008) interprets the Thanksgiving lamb bone as a wishbone.

On this day of inclusion, I cannot help but reflect on an event upon which Peter and I stumbled this past Sunday, November 20th. We were returning from coffee at Fashion Place Mall, going back home by driving northward on State Street, when we saw the flash of cop cars a block or two ahead. As we got closer, we saw that the occasion was a procession moving toward us on State Street. The parade was happening mostly on the side-walk, and the cops were driving alongside the group as a buffer between them and the traffic. We stopped on the side of the street to see what this was about.

A notable characteristic of the group was that they were dressed in black, down to women and children, with the women and older girls wearing black headscarfs. From the banner the people at the front were holding high, we could make out Arabic script. My immediate thought was that this was a protest in relation to the recent election. Ever obliging Peter drove around the  block so we could turn onto the same side of the street as the parade and find out what this was about. Once we had parked and were walking briskly behind the marchers in order to catch up, it was clear that other onlookers and bystanders were interpreting the parade as an infringement of “their” space, State Street. Several men and at least two women were waving fists and shouting abuse at the slowly passing group.

Gerda, in striped dress, talks to the women at the rear of the procession. (Peter is taking photos.)

After speed-walking on State Street for a minute or two, I caught up with the procession, and, indicating my friendly intentions with a greeting and a smile, fell in with a woman lagging behind because she was pushing a stroller and had a little girl with her of about Aliya’s age, 6, who had gotten tired. After she said it was okay to walk with her, I asked her what the parade was about. She said that she’d get someone else who could explain it better, and waved over another woman who seemed to be of college age. She told me that this was the holiest day in the Shia Muslim calendar, a commemoration of the martyrdom of Mohammed’s grandson Hussain and his family in Karbala, Iraq, in 680 AD, 61 years after the prophet’s death. By then, the group of woman with whom we had by now caught up had summoned a leader from the front of the procession to give us an in-depth explanation of the Holy Day. His name was Falah. He elaborated that Muhammed’s grandson, together with most members of his family, were killed by a tyrannical ruler, Yazid, who was at the time pillaging cities and slaughtering thousands of citizens, with surviving women suffering the all-too-familiar war-time fate of captivity and rape. The day is called Assura, which is set aside to mourn the death of Hussein and his family every year as determined by the Islamic calendar, which is based on the lunar year.

Gerda joins the Assura procession on their last stretch.

At this point, an angry bystander had moved closer to the marchers, and was shouting “Go back to where you came from!” accompanied with a menacing expression and threatening arm and hand gestures. The young woman and I both shouted remarks along the lines of “Come on, this is a legal parade with a permit from the city.” Falah silenced us and echoed a sentiment similar to Michelle Obama’s phrase, “When they go low, we go high.” The conversation turned to Falah and his companions’ feeling of alienation and fear bred by the still on-going denigration and sometimes attacks of Muslims that was generated during the Presidential election.

A Syrian refugee family of four had to flee their home again [in June 2016]— but this time, it was in Tucson, Arizona. A threatening message of hate written in crude, multicolored handwriting had been taped to the door to their new home. The Huffington Post‘s Islamophobia Tracker.

On State Street, Falah responded to the bystander’s negative outburst from a place of faith: Allah, in his own time, would bring peace. With an ironic smile, he told me that over 90% of the participants in the march, including himself, were American Citizens. Ashamed of my impulse to “gow low,” I apologized for bringing additional unwanted attention to the group. Walking and talking with Falah, Peter and I accompanied the procession to the end of the block, where they turned off State Street and were apparently about to dissemble. Falah and I exchanged e-mail addresses so that he could send me more photos of the parade.

Today, on a day that is hectic and happy for the majority of Americans, Peter and I are spending time at home in quiet activities: he is doing the computer work necessary for me to update my website so that my book MEMORY’S LAST BREATH will show prominently on the first page (coming soon) and I am reflecting here on this Thanksgiving, which I am experiencing as more poignant and evocative of reflection than before: will Trump be able to bring more unity to our country as he promised in his Thanksgiving message? For now, I don’t see how.

Other than the reaction of bystanders to the Shia procession, sad evidence from all over the US shows that the inclusion promise of that first Thanksgiving has not yet come to fruition–in particular for Native Americans, whose part in the first feast is idealized by us descendants of the Pilgrims (and privileged latter-day Pilgrims like our family). From a Native American perspective–for example that of a member of the Wampanoag Tribe on the Gay Head Aquinnah reservation, a descendant of the participants of the first Thanksgiving, who spoke today on NPR–Thanksgiving has long been a day of mourning.

The Gay Head Aquinnah reservation is located in the tiny western “foot” of Martha’s Vineyard.

And then there are the hundreds of Native Americans and supporters camped out at Standing Rock, North Dakota,to “protect the water” of the Missouri River by trying to prevent the construction of the Dakota Access pipeline across their tribal lands. On Thanksgiving day, as they were gathering to participate in a dinner (that would include 210 roasted turkeys) prepared by volunteer chefs and served by celebrities including actresses Jane Fonda and Shailene Woodley, a protester waved a sign that triggered hoots of laughter from the crowd: “Don’t Feed the Pilgrim.”

In Cannon Ball, N.D., protesters against the Dakota Access oil pipeline gather at a hill where they say burial sites are located. (Nancy Trevino via Associated Press). Los Angeles Times.

Peter and I will celebrate our Thanksgiving with our family, now pretty extended, on Saturday. So, off to the kitchen we go to prepare our share of the food for our own gathering of American-born and latter-day Pilgrims.

Two Amazing Women Show Gerda that the Boldest Hearts Sometimes Throb under Scottish Terrier Pajamas From California Dreaming to the Real McCoy: My book is getting closer to publication!