The gift of the Magi, sort of

When dementia had shrunk my mother’s world to a bedroom, corridors to walk, a dining room and—on weekends, holidays, and other celebratory occasions—the homes of her children, food remained for her a compelling interest. She would sit at the table, deaf to attempts at communication, but very attentive to what was on her plate or on the way to her mouth. Susanna did not love everything, however, told me once that my boiled baby potatoes were too dry, and my sister that her spinach was too watery, and a brother-in-law that the wine was too sour. In the case of the wine, my brother-in-law carried her glass to the kitchen, added two spoonfuls of sugar, stirred, and returned it to her. She savored it, declared it the best wine she’d ever had. Every one of my siblings’ families adopted the trick. Yes, we were that kind of family. My brother-in-law’s genius and the repetition of his solution became an anecdote or action that would set off an immediate roar of laughter. My mother laughed with us. Whether she knew what the joke was or that the joke was on her did not matter. When you live with dementia—whether that of a loved one or your own—just about any source of laughter is preferable to its alternative. 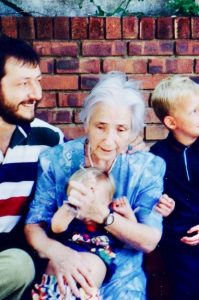 Ma Susan two years before her death in 2006

I inherited my mother’s sweet tooth. In my shrunken world, having dessert every day after our evening meal—together with Peter’s coffee specialty, a foamy, milky decaf brew—is one of the highlights of my day. While Peter’s snack tastes run rather to the savory—potato chips, nuts, a cracker with cheese—he enthusiastically partakes of the sweet offering, indulging me in my conviction that dessert every day is to be celebrated as a marker of adulthood of which I had dreamed of as a child: “When I grow up, I will have pudding every single day!” We reached this marker only after we had retired, when things had slowed down enough for us to think what the pleasures were that we now had the time to attend to. About five years ago, we started buying a whole cake (or other dessert) just for ourselves. We would have a small helping every night. Given the seductive nature of concentrated sugar—which, we found out the hard way, causes the monkeys and baboons in South Africa to raid peoples refrigerators, ignore the fruit, and go directly for the yogurt or ice cream—we, too, got greedy and our helpings got bigger and bigger. After a while (usually after we had finished a favorite cake), we would take stock, admit that we had become too addicted, and suspend the cake habit for the foreseeable future. Even during these times we would still have a tiny sweet snack with our coffee, such as a graham- or wholewheat cracker with peanut butter, honey, or nutella. We’d stay on this version of the straight and narrow until “we had the sugar thing under control.” Gradually “real” desserts would sneak in again. We would prudently start off by buying only one slice of cake or pie at a time for us to share. After a recent lean spell of some weeks,  Peter and I—independently of each other—decided earlier this week that it would be okay to feed our sweet spot again. At separate times during the day, we had each snuck to WholeFoods and got a surprise portion of dessert to share. Upon each unveiling our contribution that night, we laughed uproariously about not only the coincidence but also because each of us had bought the OTHER’s favorite indulgences. to share 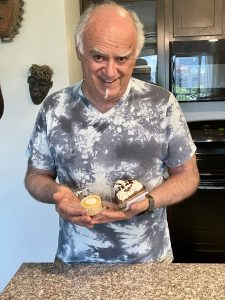 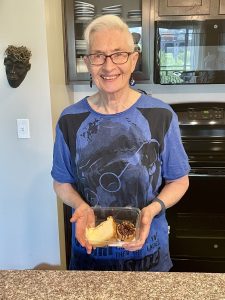 Peter brought home a tartlet with a lemon-bar-style filling that I love and a slice of my favorite chocolate-pudding pie; I picked up his favorites, a cheesecake slice and a tartlet with pecan-pie filling.

Being a Baby Boomer who had encountered O. Henry’s 1905 short story “The Gift of the Magi” in the Reader’s Digest during my childhood, I could not help but compare our modest actions with those of O. Henry’s characters, albeit tongue-in-cheek: Della and James each heroically raised money to buy a meaningful gift for the other: Della by selling her knee-length hair to buy a gold chain for James’s pocket watch and James by selling his watch to buy Della combs for her long hair. 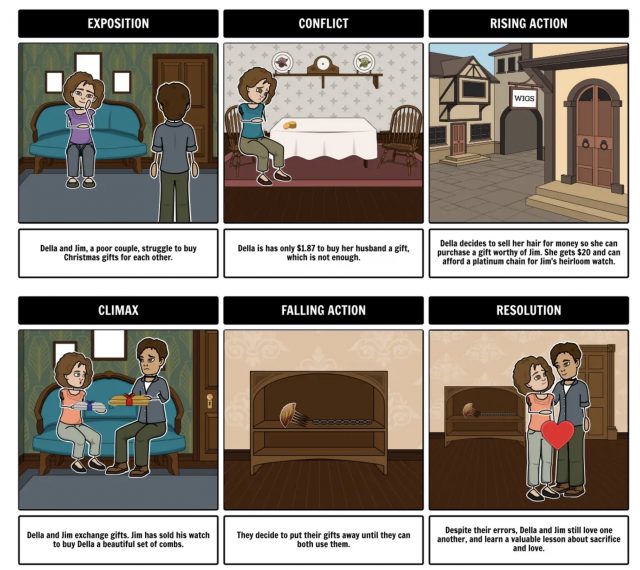 If you are a Gen-Xer or belong to one of the other alphabet generations, you may instead have encountered “The Gift of the Magi” in one or more of the many visual versions it has inspired over the years. Below I give links to three of which I am aware—there are more.

2. In the 1978 Christmas special Christmas Eve on Sesame Street, Ernie and Bert do an adaptation of “The Gift of the Magi”. Ernie gives up his Rubber Duckie to buy Bert a cigar box to put his paperclip collection in, and Bert gives up his paperclip collection to get Ernie a soap dish to put his Rubber Duckie in. In the end, Mr. Hooper happily gives them back their items, realizing how much it hurt to sacrifice their possessions to please each other.

3. Moving from the sentimental sublime to the meanly ridiculous, I give you this 1988 Saturday Night Live lampoon of would-be president Trump (impersonated by Phil Hartman) and his then-wife Ivana (Jan Hartman) exchanging Christmas gifts: “In their debut as characters on “Saturday Night Live,” Donald J. Trump and his first wife, Ivana (played by Phil Hartman and Jan Hooks), are the filthy-rich romantic leads of this parody of O. Henry’s “The Gift of the Magi.” Donald sells his yacht, the Trump Princess, to buy Ivana a gold, jewel-encrusted door for Mar-a-Lago, but Ivana has sold Mar-a-Lago to buy Donald a gold, jewel-encrusted anchor for his yacht.” The New York Times.

Seen in the context of these 3 cultural interpretations of O.Henry’s famous story, it is clear that the kind of “selflessness” that Peter and I employed in our choice of desserts is most analogous to the Bert and Ernie and Trump/Ivana renditions: Peter’s and my “deprivations” were short-lived and in the end each of us got exactly what we liked most. The moral tale of our story is rather in the fact that Peter and I have had a life-long failure in telling the other what we really want, a trait that, for example, has often caused us both to watch a film together that neither of us particularly wanted to see but thought the other would love. Our children have noted this tendency in their parents to not speak truth about their desires. The shrug or roll their eyes when they see us doing it. Our children and their spouses are much more direct in telling each other their likes and dislikes, even when it comes to the sticky topic of each other’s behavior. We both see the good of that and admire the excellent communication that results between each couple and also encompasses their truth-approaches to their children. That doesn’t mean that they don’t sometimes “sacrifice” for their partners. Like most couples, of course they do! 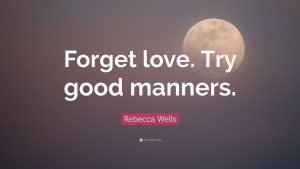 I wouldn’t go quite as far….

Peter and I, however, grew up in an era where “good manners” included not hurting each other’s feelings. As a result, our arguments used to be very obscure, each never telling the other the depth of their dissatisfaction about a particular action or situation. However, we have learned over the years to tell each other the truth (mostly) during arguments. In our daily non-fighting and harmonious lives, though, we still sometimes second-guess the other’s preference rather than speak the truth about what each of us wants. We are under no illusion that our “self-sacrifices” betoken a superior kind of love. But sometimes making a choice like each of us did with the desserts, is still a superior kind of pleasure!

Utah rebroadcast of the PBS film “The Gerda That Remains” on May 5, 7 pm AND May 9, 11 pm Once upon a grocery store I met an artist who paints what she sees: meet Lorna Anderson

“To say goodbye is to die a little”: Part II

You can now stream “The Gerda That Remains” on PBS Utah