In  my previous post about six weeks ago, “Turning a new leaf,” I reported on my resolution in early June to, in the words of André Gide, “embrace joy as a moral obligation.” I also described the role of a to-do list in reaching this goal. Working on items on my list actually did result in a vast improvement in my mood. Following my list, I got a bunch of things done, for example, finishing my planter garden on our balcony; re-starting my knitting of a blanket for my granddaughter Aliya; having each of the grandkids over (one at a time) at least twice during the summer; and making quite a bit of progress on my scariest task, my grandkids’ family history books—working on them causes me endless confusion: often I think I am in one grandchild’s book, but paste in a picture of another. But despite my slowness, I got a few pages done. 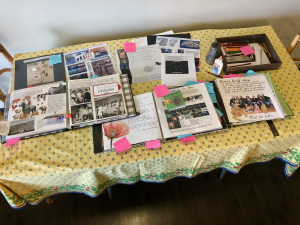 My improved state of being lasted well into August. Even when the wildfire smoke returned and made the air even worse than in mid-summer and I again could not walk outside, I managed to pull myself together and go down to the small gym in our building to walk on the treadmill. The fact of me even entering a gym attests to the fact that my emotional state had vastly improved: exercising with machines is my absolutely least favorite way of getting the exercise I need to stave off my dementia-triggered anxiety. Somewhat predictably, as the bad-air days went from about the first week in August until the present, I slid into a depression again. Gone were my visits to the gym. The decreased exercise made me both anxious and sluggish. Also, the after-effect of daily challenging my brain over a long period of time completing items on my list wiped me out all of a sudden. after a high of some weeks, may brain protested and all bu shut down. For days I was unable to do anything but watch movies. Some days not even that. I could not make choices: I could not feel a stronger attraction for one of the options than for the other. It was as if I could feel nothing at all, which translates to an almost total lack of motivation. Although I knew rationally that I was very fortunate and had a huge number of privileges, I could not feel joy. I did not feel terribly bad either— just felt NOTHING. I ghosted through my life for more than a week. I might still have been in that state had it not been for Peter’s constant support and one extraordinary act of generosity.

On days when Peter took me to the mall to walk and have coffee, I felt better. However, my mood lift would last just hours and my torpor soon returned. I could see how worried Peter was. The worst was that his taking me to the mall, giving me a pedicure, preparing the best salad in the world for dinner every night—together with many other loving gestures—failed to kindle in me any lasting spark of engagement with the world. Our situation was horrible—even worse for him than me. The “problem” of life-long togetherness is that—in the words of Aristotle—”love [comes to be] composed of a single soul inhabiting two bodies.” Under the weight of my dementia, however, my contribution to our “single soul” contracted into a tiny, ultra-heavy black hole, cold and unapproachable, its huge gravitational pull trapping all my light. To balance out my dereliction, Peter’s soul had to expand to almost breaking point in order to produce all the love needed to sustain the two of us. He supplied help, support, courage, and intellect for both of us. But I used up most of it. And so it went to the end of August.

Judy Chicago, The Price of Love (after Kollwitz), from the series The End: A Meditation on Death and Extinction (2015).  For Kollwitz’s piece that inspired Judy Chicago, go here and scroll to the bottom of the first page, click “LOAD MORE” to see the second page. The image is in the second column and is titled The Parents (1922). (There is another image with the same title at the bottom of the first page, but its date is 1919).

On the mid-week afternoon of September 1, Peter suggested that we sit down for a cup of coffee to chat and relax. Lately he always makes our coffee because I have not yet managed to duplicate his delicious, foamy, milky brew—my favorite drink of comfort. We sat down on our his-and-her LazyBoy/LazyGirl couch, our mugs within sipping distance on our side tables. After a while, Peter said there was something he wanted to discuss with me. He took out his iPad and brought up a handwritten meeting agenda. This was not a huge surprise—he and I often sit down, each with our own notes, to discuss plans and issues in our life. This time, though, we had not planned a meeting: his agenda was unilateral. The minute I became aware of the magnanimity of its contents, I started to cry. His whole document consisted of conversation topics, questions, and suggestions for a brain-storming session about how to make my life better. It was all about what I needed and what he could give. Three long computer screens worth of bulleted lists: things I enjoyed doing in the past; questions about what activities I still enjoy and might still be able to do now; a bucket-list of suggestions of things I/we had not yet done but that he thought I might enjoy. He took notes during our discussion, which made a fourth screen. Altogether, four pages of priceless love:

During our discussion, I cried out days of pent-up stress and anxiety. I laugh-cried as we joked about his “intervention.” I wept happy tears because he loved me so much. I cried out a burden of weight that had pressed on my being for what seemed like forever. Peter just kept hugging and holding me. All the while, I started feeling again: deep sadness about what was happening to me, to us;  bottomless love; at the end. I felt remarkably regenerated. Days later, I still feel more capable and have more energy than I’ve had for a long time. During and after our talk, the traditional wedding vows that Peter and I pledged when we got married 50 ½ years ago came to my mind. (Our church ceremony was in Afrikaans. There was no such thing as “your own vows.” Our pre-determined vows included “love and obey,” about which I had already complained to Peter beforehand… ). Essentially we did the familiar pledge, “I, _____, take you, _____, for my lawful wife/husband, to have and to hold from this day forward, for better, for worse, for richer, for poorer, in sickness and in health, until death do us part. I will love and honor you all the days of my life.”

“To have and to hold”: Peter and Gerda at the Vaal River in South Africa, not long after we got married in 1971.

Whereas I have during our long life together mostly thought about the “for-better-for-worse-for-richer-for-poorer” part of our wedding vows, what now struck me most strongly is the part that says “to have and to hold.” During Peter’s “intervention,” I deeply and literally experienced the “to have and to hold”: to be lovingly grasped and held against the person with whom I had spent 53 of my 71 years, or 75% of my life, although it feels like my whole life. Daya later I strongly hang onto the tangible expression of the phrase. It’s not as if Peter and I don’t hug and cuddle every single day, but the hugs and cuddles during our discussion and since then have been extremely precious—I FEEL their depth every time. Even when my dementia gets worse, I want to, wish to, and will try to FEEL this love every day “until death do us part.” I know that I won’t, because dementia gradually robs one of strong feelings and eventually of all feelings. Therefore I embrace with joy, here and now, my revived ability to FEEL.

In relation to “until death us do part,” my biggest wish is that Peter will die first, in my arms, so that he does not have to undergo the pain of my death. Despite my firm intent to take my own life when my dementia causes my days to no longer have meaning according my own criteria, I have promised Peter that I will do my utter best to keep on living—no matter how hard it becomes—as long as he lives. I want to have and to hold him up to the very moment when death inevitably parts us, that is, when he crosses from being alive to instead inhabit the minds of his still-living earthly kin—that is, all of us to whom he has grappled himself with hooks of steely love—there evermore to dwell in “the holiness of [our] hearts’ affections“; or at least until the living minds of all of us who knew him, too, have crossed over to the realm of nameless ancestors.

Judy Chicago, How Will I Die? #8, from the series The End: A Meditation on Death and Extinction (2015). The inscription reads, “Will I Die in my husband’s ARMS?”

Turning a new leaf: out of tune with what the summer solstice has wrought, Doña Quixote revamps her winter solstice resolutions Fancying herself open-minded, Doña Quixote speaks at an alternative medicine conference