Today Peter and I celebrate 50 years of marriage

and the three baroque years before, when we were “going steady”…

Note: This post is a day late, because I forgot how to properly post a video on my website, something I had done many times before, and somehow tangled up the system to the point of freezing everything in place. Peter worked late into the night to repair the damage and, when I woke up this morning, everything on my website was singing along again. This incident, which has frequent daily equivalents, stands as an example of our marriage in these latter days of my increasing dementia confusion: Peter you are still my rock—my co-parent/honorary parent to Marissa, Adam, Newton, and Cheryl; my co-Oumpa to Kanye, Aliya, and Dante, my lover, my fixer, my 24/7 caregiver, without whom there would be no household, no videos, no website, no laughter, no recognizable me.

Back to our 50th anniversary, which actually happened yesterday, March 26.  We were married in 1971. We met three years earlier, when I was seventeen and he nineteen. 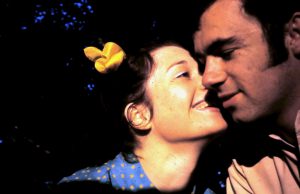 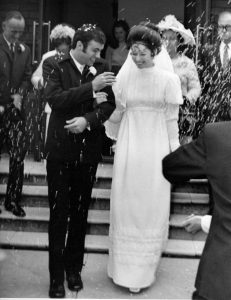 On the morning of your anniversary, we had our coffee to the song below, which we listened to a lot while getting to know each other 53 years ago:

After breakfast, we went downtown to have coffee in City Creek.

For lunch, I made us a meat pie: 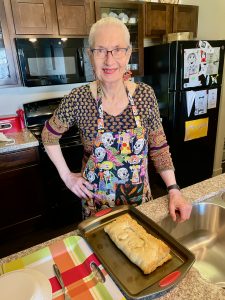 In the afternoon, Peter surprised me with this little video. We laughed and hugged for the nth time today.

In the evening, Peter made us a meal of home-made guacamole, toast, and red wine. 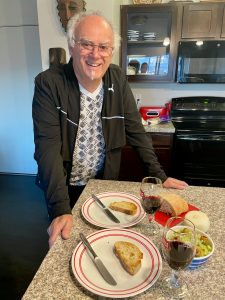 After eating, I went back to my computer to work on this website. And got stuck. Frustrated. Anxious. Went to bed while Peter undid my mistake.

What to say about our marriage? It was the greatest good luck to have met each other so young and yet grow together in enough similar directions to still be together today. It was the hardest work we had ever done to work through the difficult times we encountered. Fortunately, at each point that might have been a fork in the road, one of us remembered our commitment and made the apologies and rectifications required. The other one forgave and participated in the patching up. While Peter and I can take some credit for these “saves,” some of them were just plain luck, as long as you go along with my twisted definition of “luck” in this example: for three years, during an economic recession in the nineteen-nineties, Peter worked next door in the state of Nevada. There was no equivalent job to be found in Utah. He was away from home from Sunday night to Friday afternoon. Only two days at home with me and our two teenagers. A year or two into this arrangement, the strain on our relationship reached a breaking point. We spent hours and days and weeks in an attempt to go forward together. At our darkest moment, “luck” struck us like a lightning bolt: there was blood in Peter’s urine. He had bladder cancer. And soon after, prostate cancer. 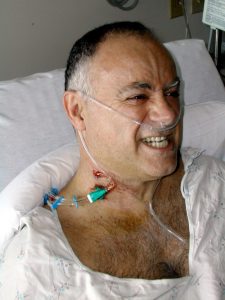 In an instant, our perspective on our lives was restored. We dropped back into our former life-long team-work mode. He received the necessary surgeries, was eventually cancer free. When he was well into his recovery, we gradually tackled the relationship issues we had been struggling with and eventually came to a place of astonishing reconnection. Cancer had saved us! 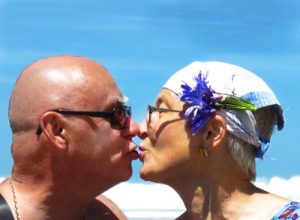 That wedding commitment—you have to take it seriously. Sometimes it takes cancer. But usually the reminder of your “yes” on your wedding day can be more frivolous. We look back at an earlier difficult time just after our immigration in 1984. Peter was juggling career difficulties and I was feeling invisible for not yet having any friends and not being able to work for lack of a valid permit. In the emotional clashes that happened, I once told him that I would divorce him if he were not the only adult in the US who could properly pronounce my name. He told me he would divorce me if I were not the only one in the US who could make his mother’s meat pie. 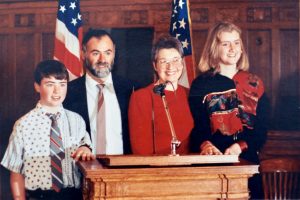 A huge link in our mutual commitment was our children. While I believe that a marriage should not be continued only for the sake of the children, I also believe that the good of the children should be foremost in the mind of marriage partners when thinking about a parting of ways. We were fortunate that our differences did not arise over often “unfixable” issues such as substance addiction, abuse, the refusal  of one of the partners to make the adaptations to continue, or untreated mental illness. We were fortunate in having retained the awe of being parents up to and into our kids’ teenage years and, even in the midst of our difficulties, had managed to remain a good parenting team. 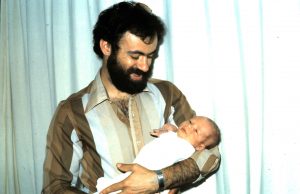 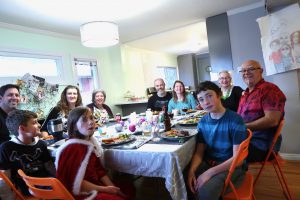 Our children were not oblivious of our stresses, of course—we all lived in the same house. Nevertheless, we had an absolute commitment not to fight in their presence or hearing—though that probably slipped more than once. Since the start of our marriage, we’ve had an absolute commitment to “good manners,” which meant keeping our fights to ourselves as well as being well-mannered toward each other, even while fighting—although that, too, sometimes regrettably slipped.

A good motto for us has been “It takes love AND good manners for a happy marriage.” Which means that, every day, we try to treat each other in private as well as we would if the other one were a best friend.

However it happened, we are so happy to be together 50/53 years later.

Over our quacamole toast last night, we clinked our wine glasses to THE NEXT FIVE YEARS!

Wouldn’t that just be the cherry on top: another five years. 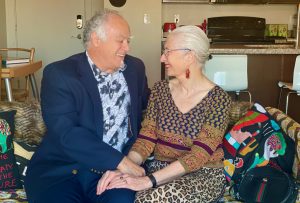