Turning a new leaf: out of tune with what the summer solstice has wrought, Doña Quixote revamps her winter solstice resolutions

Each year as the Earth’s axis tilts to afford the North Pole maximum exposure from the Sun, smoke from fires in Utah and our surrounding states turns Salt Lake City’s sky dark with smoke. One day, when it seemed that the previous night’s wind had somewhat cleared the sky, I foolishly walked outside to get in my 10 thousand steps for the day. I got home with a shortness of breath that forced me to sit down and do nothing but try to breathe. Peter dug out my nebulizer and two different inhaler pumps from our storage room only to find that my asthma medications had expired. I was lucky enough not to have had to use them for several years. Since my shortness of breath was clearly developing into a full-blown asthma attack—and I very much did not want to go to the Emergency Room—my Guardian Angel arranged with Marissa to go pick up some of her medications. Unlike her mother, she wisely keeps them updated even though she, too, has not had to use them for many years. With fresh medications in hand, Peter helped me to take treatments around the clock. 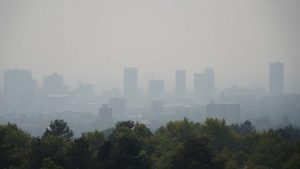 During the two days it took for my breathing to no longer be my first concern, my digestive system started acting up in all its usual ways—painful reflux, diarrhea, vomiting, the works. Peter started googling all my symptoms and discovered that gastroesophageal reflux disease (or GERD)—with which I had been diagnosed some years ago—and asthma are actually connected: while their co-occurence is not clearly understood, a few theories circulate in the medical establishment. For example, acid reflux is thought to trigger a protective nerve reflex that causes the airways to tighten in order to prevent stomach acid from entering the lungs. The narrowing of the airways can result in asthmatic symptoms, such as shortness of breath;  vice versa, an asthma attack is thought to cause pressure changes inside the chest and abdomen during an asthma attack. As the lungs swell, the increased pressure on the stomach may cause the muscles that usually prevent acid reflux to become lax so that stomach acid flows back up into the esophagus.

Figure 2. Peter and I laughed hysterically the first time we learned that my annoying stomach disease was abbreviated to the first four letters of my name. Asthma and GERD exacerbate each other.

When my breathing was better, I made an appointment with my family physician to talk about all these issues. My doctor’s visit led to renewed prescriptions for my asthma as well as an instruction to schedule both an endoscopy and a colonoscopy to look anew at my stomach troubles. We are still awaiting the results.

All the while during my sickness, I was no gallant bearer of my physical distress. While I tried not to take out my agitation on Peter—my nurse, my person, my everything—I often failed. By the time my physical symptoms had somewhat abated, he was haggard with exhaustion and worries. By then I had sunk into a deep depression rather than having returned to some perky and upbeat version of myself who could support him in turn. The stress of my physical illness made my memory symptoms and the associated anxiety and Weltschmertz worse. For days I did every familiar household task wrong. I broke glassware, dropped bottles of liquid, forgot to switch on the dishwasher or take the laundry out of the washing machine. I got lost on our own floor of the apartment building, tried to open the wrong apartment door. I got so disoriented in the elevator that my world dropped like plane in an air pocket when we stopped at my supposed destination and it was not the lobby by the front elevator that I expected but rather the recycling area way the back elevator. While my sickness and increased bumbling were at their worst, it took every ounce of mental energy I could scrape together just to get out of bed in the morning and go through the series of ego-draining blunders once again for another day.

I was still deep in this funk when one day I read a statement by André Gide that nudged me into a momentary longing to reconnect with the world around me. Here is a computer-wallpaper version of Gide’s wisdom:

I believe that, have believed that for most of my adult life.

Its sentiment was part of my 2021 new year’s resolutions.

I want to go back to such a state of being. I have to.

I resolved, as I’ve had so many times since my microvascular dementia diagnosis, to again direct all my mental energy toward turning over a new leaf.

When I first learned the expression “turn a new leaf,” we were living on the Steenekamp family farm in South Africa. As pre-schoolers and elementary children, my siblings and cousins and I spent every spare moment outside we. We climbed trees, plucked their leaves for our fairy houses or necklaces or ant traps. It was obvious to me that “turning over a new leaf” was derived from the botanical games we played.

Fig leaves, front and turned over.

My grandparents had fig trees in their orchard. They were old but not very large, but big enough to climb for the juiciest figs higher up even though the birds might have had a peck or two from them. The smell and taste of what would today be regarded an overripe fig, hot from the sun, is a childhood sensation I had long wished to enjoy one more time in my life. I also yearn for the coconut, vanilla, and nutty taste of a newly budded leaf, underscored by the sourish yeasty smell rising from the rotting, fallen fruit beneath the tree. However, since life on our farm was greatly shaped by the dutch reformed environment of the Nederduitsch Hervormde Kerk we attended in Marikana, fig leaves, for me, also had a sartorial component: “[Adam and Eve] knew that they were naked; so they sewed together fig leaves and made coverings for themselves” (Genesis 3:7).

A mosaic of Adam and Eve from the 5th Century BCE, now at the Cleveland Museum of Art. A Greek inscription above reads from Genesis: “And they ate, [and they] were made naked.”

Thinking sartorially, I  was also reminded of Dame Vivienne West, the British fashion designer largely responsible for bringing modern punk and new wave fashions into the mainstream. In her fall 1989 runway collection, titled “Voyage to Cythera,” she famously trotted out a nude body suit flaunting a perspex fig leaf on the crotch. Now 79 year old, Dame West recently revived this look by wearing her bodystocking—the perspex leaf of her original design turned over to one in stained, reflective glass—with a distressed gray shawl, leather gloves hiked up to her elbows, and a graphic top cinched with a well-worn brown belt. She posted a photo in an Instagram posts to advertise her environmental advocacy on behalf of our planet—via a YouTube series “Save the World: The Big Picture”—in which she tackles tough issues such as boom and bust economics, whether taxing billionaires to pay for Covid lockdown is a viable option, what to do about climate change, and how to achieve food self-sufficiency.

As happens with google searches, my dark mood was elbowed upward by my discovery of a sartorial line of which I had been utterly unaware before: “crotch jewelry.” The expression “turning a new leaf” gathered a whole new set of connotations. Let the pictures speak for themselves.

The botanical and biblical parts of this post, as written above, may make my ascent out of misery seem fast, lighthearted, and easy. That, however, was not the case. My first halting step toward turning over a new leaf was more closely aligned to the actual meaning of the expression, first used in 16th century British English as an offshoot of the new industry of printing books rather than hand-copying them on scrolls. Printed books were made of quires, that is, sheets of paper folded over. A few quires were sewn in the middle by thread to make a booklet consisting of separate leaves, or pages. Booklets would be sewn together and stitched by their edges for the final product. Turning over a page or a leaf in a book became a new daily activity of the educated.

Left: The action of “turning over a leaf” was used metaphorically to represent a new beginning; right: Turning a new leaf, Gerda took up journaling again after a break of several years

My first step toward again embracing joy as a moral obligation, was organizing my thoughts on paper. Using a still blank journal my friend Riva had given me some years ago when they moved to Portland—its cover embellished with a print of Gustav Klimt’s gold-hued The Kiss—I started writing down my daily blunders. Giving my failures to a leaf in a book made them float away instead of whirling about in my head. Next I identified activities that have given me pleasure in the past and for the execution of which I still (more or less) had the brains. My brainstorming resulted in what I regard as a joy-kindling to-do list:

It is now about two weeks since I put my plan into action, and can report an improvement in my mood that both Peter and I have observed. Of course I don’t try all the steps every day. Some days I don’t do any. But most days, I get several hours of joy out of one or more of my steps. Being accountable to a check list has always been very important to me. This time, too, it has succeeded in lifting my depression because my efforts have at least started to kickstart my brain into producing those endorphins that even a small success can bring. Here are photos of one of my visible results:

Left and middle: Two incarnations of the decorated branch on our stoep; Right: The pot plants with which I (with much help from Peter) have replaced the tree branch. Note that the plantain lily (second from left) has already produced a flower!

My most recent return to embracing joy is not completed. Nor will it be my last one. Like Jo March in Louisa May Alcott’s Little Women, “I keep turning over new leaves, and spoiling them, as I used to spoil my copybooks; and I make so many beginnings there never will be an end.”

In between the restarts, though, there are periods when—in the words of poet Yone Noguchi (1875-194),

The silence is broken: into the nature
my soul sails out,
carrying the song of life on his brow,
to meet the flowers and birds.

Baring body and soul (again): is Doña Quixote still rational enough to consent to being interviewed in her Spanx? “The Price of Love”: Doña Quixote traps Gerda in apathy, Peter stages an intervention