This morning when I walked over to say hi to our across-the-road neighbor Diane Bond, I noticed her wearing a turquoise top with her jeans. When I got to her stoep, I remarked on how good the color looked on her and how cute the scotty terrier pattern on her top was. She told me it was her pajama top—she was just about to change into her daywear when I popped in. I told her that I was writing a piece for my blog, told her what it was about, and asked if I could use a photo of her and me, with her in her scotty top, as an accompanying image. Given that Diane graciously allowed me to tell her and her late husband, Bob’s, story in my memoir MEMORY’S LAST BREATH: FIELD NOTES ON MY DEMENTIA (available in book stores on June 6, 2017), she knew about my ongoing writing projects and trusted me once again with putting her in a story. 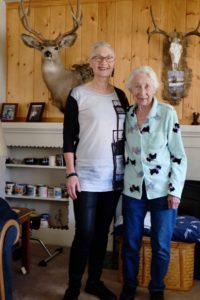 Gerda and neighbor Diane on a Saturday morning

In the book, I tell the how Diane took care of her late husband Bob at home until days before his death of dementia-related causes. For 4 years after a massive stroke set Bob on the path to dementia, Diana was there for him 24 hours a day, with little respite. She was the one who alerted the neighbors—and sometimes the police—when Bob escaped from their always-double-locked house and took to the streets, often wearing only his pants. She dealt with his erratic emotional behavior, which varied lovingly stroking her hair and telling her he wished she were dead. Diane’s caretaker role is the example that first comes to my mind when I think about the unimaginable love and dignity that can accompany an end-of-life choice of “until death us do part.”

In this post—other than that the soft shade of turquoise looked great with her white hair and it was an image of her that I wanted to preserve—I brought her into my story to help personify the acts of kindness and grace now linked in my mind under “scotty pajamas.”

Insofar as I have ever thought about scotty pajamas (or other kinds of matching family holiday sleepwear), my thoughts were 1), that my family—individualists to the core—might just skip Christmas rather than show-up in coordinated lounge-wear outfits, and 2), that the people I’ve noticed doing their grocery shopping in what appeared to me to be their pajamas were actually practicing a pajama-as-day-wear runway look that fashion designers have made trendy this year. (Or did they just run late in dropping the kids off at school?) 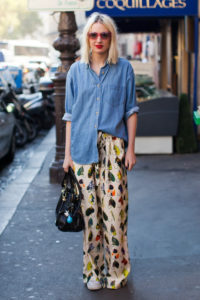 It was through this fashion lens that I saw Diane in her soft, cosy, flattering top this morning. And before her, there was the woman I met on the bus who similarly sported scotty pajamas, this time the bottoms. 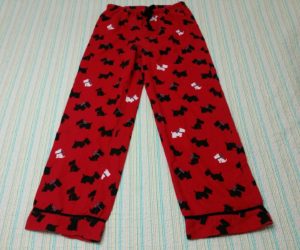 Scotty pajamas for the whole family?

I went almost two months without riding the bus: first, Peter and I spent almost all of October in Europe and second, we came back with bad colds that kept us holed up at home, by now going on for over 3 weeks. Being out of practice, I missed the bus yesterday on my first try—I had the time wrong, which resulted in me having to shelter in Starbucks from a cold wind that had blown in from the south, because I did not dress warmly enough for the cold spell. I managed to catch the bus the second time around. 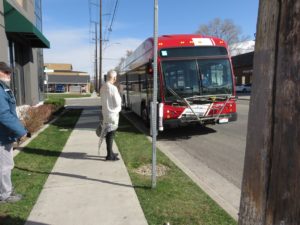 Gerda riding the bus a year ago with clothes not adequate to the weather conditions. Will she ever learn?

A few minutes into the ride, I spotted a woman wearing red pants waiting by the UTA (Utah Transport Authority) sign that marked a bus stop. She also wore a red hat. At a distance, her color-coordinated items brought the pajama fashion trend to my mind. Once the woman had boarded the bus, though, her overall appearance suggested that her style had likely not resulted out of a concern for current fashion trends, but rather from the instinct to keep warm: between the bright red pants and the hat, she wore a blue-grey heavy winter jacket. Her face under the hat was crisscrossed with wrinkle lines that were belied by a big smile and sparkly eyes. A number of her front teeth were missing.

My perception that her smile and eyes beamed a sincere desire to engage with the world was not mistaken: she had hardly sat down when she said hi to a women seated across the aisle from her, about two rows toward the back. (The bus was relatively empty.) I was another 3 rows further back, seated in the elevated section from where it was easier to spot the upcoming street names. Despite the fact that I was at a distance that would usually prevent someone from shouting a greeting, I, too, got a “hi” and a friendly grin. I greeted her back. From this self-introduction, she went on to tell her story to me and the other woman she had spoken to, but loud enough that everyone on the bus could hear.

This is NOT a photo of the woman I met on the bus, but that of a homeless women in San Diego about to enter a detox program to qualify for being placed on the waiting list for a home. In Salt Lake City’s Housing First program, being sober before you get into a home is not required, but rather doing both acts at the same time.

As I did not get to know the name of the woman on the bus, I’ll refer to her as Angela. Angela, as she explained, had lived on the street for 20 years, but had recently been placed in a housing unit run by the City of Salt Lake. Although I and everyone else one the bus who wanted to could hear her story, I believe the main intended recipient was the woman about two seats back, and on the other side of the aisle than Angela. Angela’s practiced eye had apparently confirmed what I had suspected about the woman across the aisle: she was living on the street. Her hair was dull and dirty, her clothes, though apparently of winter weight—though surely not adequate for a night outside—were soiled and worn. Angela was telling her how lovely it was to be living “inside,” which she achieved only a week earlier. Under Salt Lake City’s Housing First program for homeless people, a homeless person does not have to be sober before receiving housing, but can enroll in a treatment program while living in a safe space. What Angela’s situation was in relation to addiction, I did not learn. What I know without a doubt was that she was not on anything other than the high of happiness when I interacted with her.

Angela’s story struck me not as bragging, but as a gratitude too large to be kept to herself—she had to share it. After hearing the story this far, the other woman looked at Angela as if she were an oracle. She asked her questions that we who have homes would not even know to ask: How did she get an ID card? A Social Security number? It was apparently common knowledge between them that someone who has spent many years homeless would no longer have the official documents that would enable them to enter a substance abuse recovery program and/or being placed on the housing wait list. Angela had answers for everything, and was extremely encouraging. She urged her bus companion to follow in her footsteps. The woman again asked Angela for the address of the place where you could apply for your ID card and Social Security number to be reissued—she looked through her backpack for pen or and paper to write it down, but could not find anything. I was about to offer writing materials from my handbag, when Angela got up, pointed in an eastern direction, and said, “It’s right over there.” She pulled the cable to signal a stop, took the other woman by the hand, and together they got off the bus.

The last I saw of my two travel companions was two women holding hands like first-graders, walking down the sidewalk like people with a purpose. As the bus moved on, I watched them until the last flash of red pajama pants disappeared behind a shrub on the sidewalk.

Doña Quixote, Accustomed as She Is To Living Irrationally, Is Applying her Coping Skills to a Trump Presidency On this Thanksgiving Day, I Am Grateful to Be an American and Regretful about Lessons of Inclusion Our Nation Has Not Yet Learned