As you, my readers, may have noticed, I have not posted on my website for over two months. Part of the reason was happy: after the February release of the PBS film The Gerda That Remains, (a documentary about how Peter and I and our family manage to still live joyfully 11 years after my dementia diagnosis), I had several interviews and book club invitations and celebrations with friends, and even an offer to paint my portrait as a gift! from an artist who contacted me. (Much more about the amazing artist and portrait in a future post.) The other part of the reason for not posting—the unhappy half—was being that being so busy (even though the events were happy) caused a downswing in my ability to manage my daily life. My brain was not functioning well, I made lots of mistakes (including losing a $50 note Peter had drawn for me while walking the 5-minute walk between the bank and our apartment), and accordingly became anxious and depressed. Peter (who was also exhausted, because I use him up when my brain doesn’t work) and I then decided to keep open three days per week on our calendar during which neither of us would arrange any appointments or responsibilities in the world outside our apartment. We’ve done that for two and a half weeks now, and the quiet time for introspection has helped a lot. My mood and energy are so much better that I promise a REAL blogpost after this one, a post with my usual news and opinions.

This post, as you’ll see, is mainly an announcement—a happy one, I must add—that The Gerda That Remains will be BROADCAST TWICE MORE this month on PBS Utah, that is, TV Channel 7. See the PBS schedule OR check below for the dates and watch on Channel 7:

My thanks to Laura Dunham at PBS who made the rebroadcast possible and, of course, to Kelsie Moor and Sally Schaum who produced the film.

If you have missed the February broadcasts OR cannot make the May ones OR live in a Utah state other than Utah, you can STREAM the film by clicking on the photo below or clicking the film title below the photo. 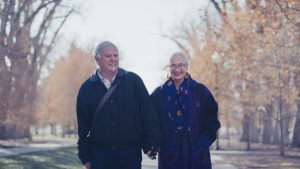 The Gerda That Remains

You can now stream “The Gerda That Remains” on PBS Utah The gift of the Magi, sort of

The gift of the Magi, sort of

You can now stream “The Gerda That Remains” on PBS Utah