What are the odds—in Las Vegas?

When it comes to lost and found, I have had four major near misses in my life. All four relate to losing my handbag and/or money in public places with many strangers milling around. Clearly the kind of lapses for which I now blame Doña Quixote  have been present in my life since my forties. 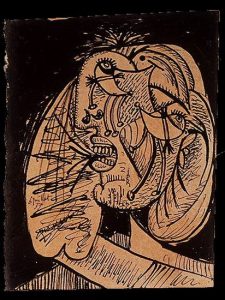 The good news is that, in every case, I have had my goods returned in the same state as when I lost them.

First, I left my handbag in a cab in London. After we were dropped at our hotel, the cabbie right away picked up another fare. When the car was halfway gone to its next destination, the passenger noticed my bag on the floor. He/she handed it over to the cab driver, who undertook to return it after delivering the good samaritan to his destination. And so he did. The front desk rang our room with the news before I had even missed my bag. Despite the fact that I hurried downstairs as quickly as possible, the driver had already left. He did not wait for what would have been the biggest tip I had ever given. 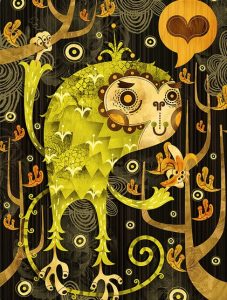 Alberto Cerriteño. The Enamored Mico. (A”mico” is a black-tailed marmoset, a small monkey found in South America. In Costa Rica, “mico” is also slang for the female genitalia. Can anyone think of an animal equivalent in English? Starts with p, “rhymes” with cat. )

Yes, there are good people in the world. I encountered another one in New York, when—on our way out—I left my handbag in the lobby of the hotel where we were staying. I noticed the loss as soon as our cab we had pulled out into miles of one-way traffic. We had the cabbie roundabout his way back to the hotel. I ran directly to the couch where I was sitting while waiting for our cab—no bag. Frantic now, I hurried to the front desk. 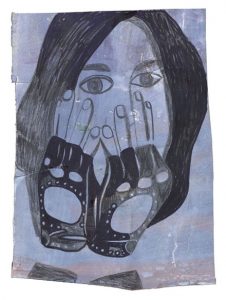 Peter had come along, since he had ID to convince the concierge that we were the people who had booked the room. The concierge took my bag out from under the desk. Someone had handed it in. 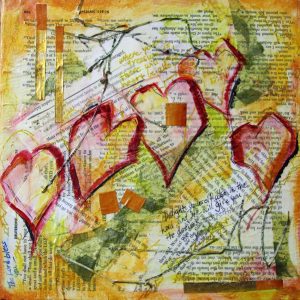 Laurie Pace, Contemporary Texas artist. Give It All Your Heart

My third loss was potentially more irreversible than the previous ones. After drawing cash for buying a couch or a camera or whatever that had been advertised in the paper and for which the seller required cash—an amount in the 3-4 hundred dollar range—I stopped at the Smith’s near our Supernal Way house, where I bought a few items with my credit card. When I got home, I got a call from Smith’s—the teller had been there a long time and knew us. She said she had found something that might be mine, but wouldn’t say what. I checked my handbag—most of the $100 notes were missing. I said I might have lost some $100 notes. That was indeed what a customer in her line had handed in shortly after I had left the store. 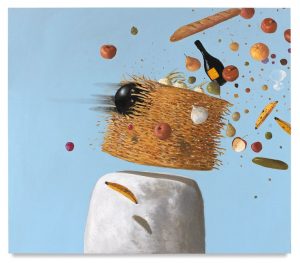 When unlikely returns of lost objects, reunions, or meetings happen in our lives, we thank our lucky stars. In the realms of the spiritual, the psychoanalytical, the romantic, we enshrine this kind of propitious coincidence with names: synchronicity, simultaneity, serendipity. 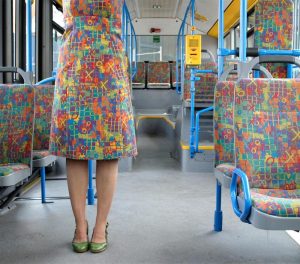 In the world of classical science, lucky simultaneities are regarded as “mere coincidence.” When I looked up “serendipity and astronomy” on the internet, over a million references came up in .2 seconds. Of course there were the unexpected, for example a link to the heavy metal band Iced Earth’s song “When Stars Collide.” More to my surprise, there were also plenty of references to the actual research results of astronomers from prestigious universities, actual research published in prestigious academic journals. A headline in the Journal of Astronomy proclaims, “Serendipitous Discovery of a Cataclysmic Variable in the Globular Cluster NGC6624”; another in the Astrophysical Journal says, “Serendipitous Discovery of a Low-Mass Companion to the Solar-Type Star TYC 2534-698-1.” 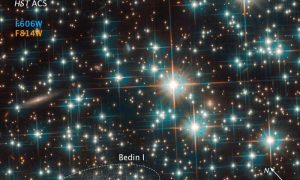 Above: “Astronomers using the NASA/ESA Hubble Space Telescope to study some of the oldest and faintest stars in the globular cluster NGC 6752 have unexpectedly discovered a dwarf galaxy in our cosmic backyard, only 30 million light-years away.(Note published in astronomy journal in January 2019.)

Our newly discovered cosmic neighbour, nicknamed Bedin 1 by the astronomers, is a modestly sized, elongated galaxy. It measures only around 3000 light-years at its greatest extent—a fraction of the size of the Milky Way. Not only is it tiny, but it is also incredibly faint. These properties led astronomers to classify it as a dwarf spheroidal galaxy. The discovery of Bedin 1 was a truly serendipitous find. Very few Hubble images allow such faint objects to be seen, and they cover only a small area of the sky.” 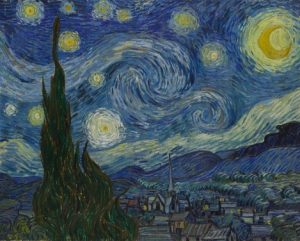 Vincent van Gogh. The Starry Night, 1889. In his imagination, the artist transforms the night-time sky that he sees through the iron-barred window of the his room in the asylum after the breakdown during which he cut off his ear.

While I—and I imagine you—”thank our lucky stars” for the serendipitous intersections in our lives, their sheer multitude in astronomy and other sciences brings out the skeptic in me. Could these fruitful results really be ascribed to chance alone? A closer look at the origin of the word serendipity brings a new perspective: The word was coined in 1754 by Horace Walpole in a letter to a friend about “a silly fairy tale” he’d read, “The Three Princes of Serendip.” 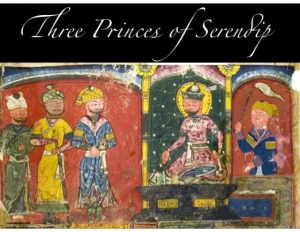 “As their highnesses traveled,” Walpole writes, “they were always making discoveries, by accidents and sagacity, of things which they were not in quest of.” What jumps out when one reads this original definition is that our contemporary use of “serendipity” leaves out half the concept: serendipity does not encompass accidental discovery alone, but also “sagacity,” knowledge and wisdom. No matter how many “stars collide,” they would not be discovered if the astronomers had not spent years of their lives studying their subject, or did not have access to state-of-the-art observatories and measuring equipment. In the case of lost objects restored, a different form of sagacity is at play: integrity, honesty, kindness—from strangers. Which brings me to my latest near miss: 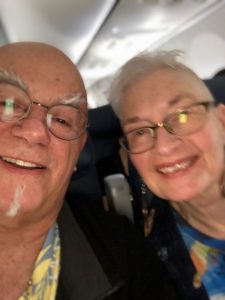 At the end of February/start of March, Peter and I visited Las Vegas again. This time we decided to fly rather than go by car. It’s a long haul these days for Peter to drive the whole distance by himself, since I gave up my driver’s license 8 years ago. 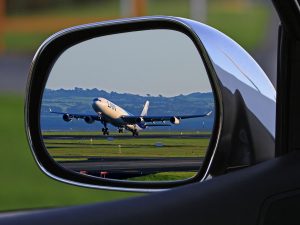 We each checked in a small carry-on bag so that we would not have to fight the other passengers for room in the overhead bins. Peter took only his laptop bag into the cabin, and I a large green plastic carry-bag for reading materials, with my regular olive-green handbag tucked inside too. After arriving in Vegas we took the train to the baggage claim. Bags retrieved, we stepped outside to catch a cab. 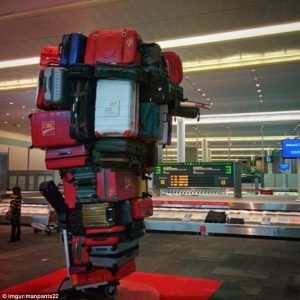 When we were about to get into a cab outside the arrivals building, Doña Quixote noticed that she had the large plastic carry-bag, but not the leather handbag. Peter did not have it either. She had left it either on the train or at the baggage claim. My handbag, of course, was  loaded with my phone, credit cards, ID, and favorite lipstick. Although I stayed calm on the outside, I was struggling to keep a major anxiety attack under control. 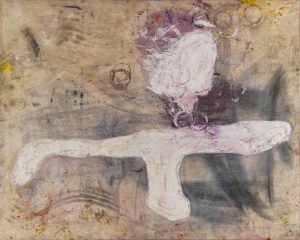 How I felt: In Bill Jensen’s Message (2011), I recognize the female torso, head attached to her arm with what looks like soap bubbles, as Doña Quixote at the airport. A small detail next to the precariously bobbing head stands for the lost object. Look at the picture close-up: 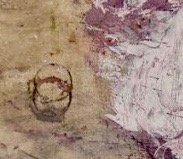 See the alone-standing, darkly delineated “soap bubble(s)” to the left of the disembodied head? It represents my beloved vintage Gucci handbag that I bought several years ago on the internet from a shop in London—now gone… 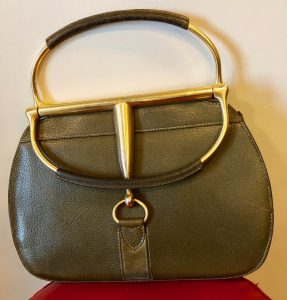 Peter, my Prince of Serendip, fortunately still had his brilliant head attached. He tracked my phone, which—together with the rest of my existence-proving paraphernalia—was also in the missing bag. It was moving along what seemed to be the street next to the airport, right next to where we were standing. While I was about to run up to each passing taxi cab to confront the passengers, Peter realized that the movement on his tracker could also be on a higher floor inside the arrivals building. So we got back on the train that returned us to the baggage claim and I approached a cop behind a kind of lectern near the lost luggage enquiry office. Before I could say anything, he asked my name. As soon as he heard “Saunders,” he said, “Ma’m, we found your bag.” 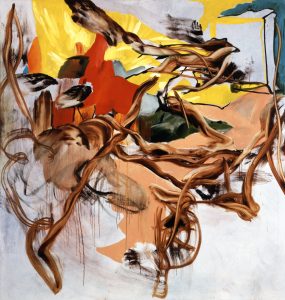 Charline von Heyl. Happy End, 2005. This is what I looked like inside even after we had heard the good news.

Apparently a fellow passenger had discovered the bag looking lonely after most of the luggage had been picked up. He/she picked up the bag and opened it to find identification. An airport security officer watched the action and thought it suspicious. When he confronted the person with my bag, though, it was clear to him that the person—my ID in hand—was really trying to return it. Why else would they be standing in the middle of the baggage claim rather than walk off with the loot?

Painting by FFO, an anonymous artist of Russian origin based in Moscow. In their work they mix classic American pin-up art with anatomically detailed collages in a predominantly vintage style of surrealist touches.

Long story short, the officer who gave us the great news had someone from airport security walk us to “Lost and Found,” where my bag was waiting. Although I was very grateful, the suppressed stress made my legs feel lame. I just wanted to be home in my bed. However, I took it as a good omen that the ladies at the “Lost and Found” window came out from the room to admire the outfit I had chosen for the trip. While thanking them over and over again for the safekeeping of my bag, I pointed out that without the bag the outfit would not be worthy of their admiration! 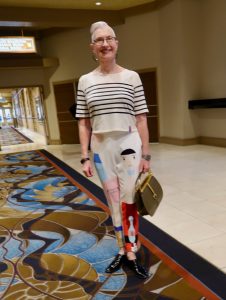 In this story, the “wisdom and knowledge” part of serendipity deserves much more acknowledgement than the “luck” part. If it weren’t for Peter, who had not lost his bag; had his phone with him and knew how to do the tracking; steered me back to the luggage claim, which I would never have found without him; and held my shoulders with his strong arm when I was about to fall apart, my story would likely not have had a happy ending. 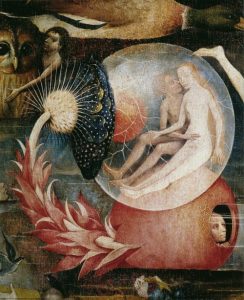 As a toast to Peter—and me, as long as I am joined to his hip—I end with an e e cummings poem, of which the first semantic unit is the definition of serendipity: “the faculty of making happy and unexpected discoveries by chance”

Not money/ Lucky are

And have you am luck

Pace 3 poems and 3 videos, Doña Quixote applauds Peter’s joie de vivre as he struts his stuff at 71 Doña Quixote trots out Gerda to talk at the Murray Senior Center this Friday, April 12, at 10:30 am