What do Rafal Olbinski’s surrealist visual puns have to do with the FREE “Alzheimer’s World Summit”?

The answer to the question in the title is, “The connection exists only in Doña Quixote’s—aka my demented self’s—mind.” Let’s see if I can disentangle it.

You know how when you learn a new word, you see it everywhere? There is a name for this: the Baader-Meinhof phenomenon. The Baader-Meinhof phenomenon is actually a term for “frequency illusion,” a type of cognitive bias your mind creates when it deviates from rational thought and starts to make up patterns out of fleeting observations, that is, observations that have not yet been properly refereed by the rational part of your brain. Frequency illusion happens 1), when you learn anything new. While the novel information is still fresh in your mind, you pay more attention to it than to other things. Because of this, you see it more often when going about your daily life. (This situation is known as “selective attention”); 2), when you suddenly see your new concept (or word) everywhere, it seems uncanny, so you try to find a rational explanation. You then decide that your new information must have suddenly popped up as a new insight that was just coming to light everywhere in the world. You feel lucky that you had received the memo “so soon.” In reality, you’ve just stopped ignoring something that was already alive and well in your conceptual culture; it only seems new and exciting to you because you have recently become sensitized to it. (This circumstance is known as “confirmation bias.”)

In my previous post, I told how it come about that I, a diehard Western science groupie, decided to participate in an upcoming (October 20-24) online gathering, the Alzheimer’s World Summit, which is focused on healing therapies for dementia that were developed outside of mainstream/conventional Western medicine. Since I first received an invitation to speak at the Summit, I “suspected” (ha! if ever there were a word indicating bias, this is it…) that the kind of information I could expect from most of my fellow speakers would contradict the lifelong convictions that stem from my academic/private self-indoctrination in the “religion” of science. I was strongly aware of how one’s mind is constructed by your own education and life experiences. Having thought about the Summit a lot—both before I agreed to the interview and again while writing the previous blog post, almost everything else I read seemed to deal with the various constructed realities in different people’s heads and fields of knowledge. When I happened to read an article on ways we see art, these words particularly resonated with me: “One aspect of our modern social context of the last four hundred years has been the inability to see beyond the categories assumed by our philosophies, sciences, habits of mass production and subject/object based language systems. The visual language of art and design have also largely reinforced ideas about reality that are born from the biases of dominant technologies. My mind shouted “Jackpot”! The quote is from a fabulous art website, MELT, “an archive of esoteric and contemporary culture, that explores the relationships between technology and spirituality, through the lesser known or often overlooked aspects of modern and historical art movements.” In the article, MELT examines how—in the “well-crafted visual puns” of Polish Surrealist Rafal Olbinski (born 1943)—”the visual language of art and design have similarly reinforced ideas about reality that are born from the biases of dominant technologies.” Oblinski’s art, however, also subverts the techniques and images of classical fine art to expose his grievance “towards their constructed reality’s failure to deliver what it publicise[s].” 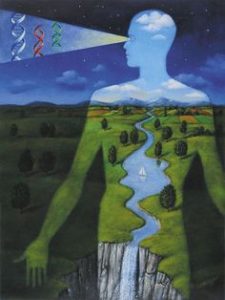 Brain Landscape subverts our trust in the conviction that we can see the natural world in an “unbiased” way, because it shows with the “vision cone”—studded as it is with the double spiral  of DNA— that our modern industrial/information/medical era world view cannot be other than “tainted” through the Western notion of science. The viewer’s knowledge of the world is, in this case, so speckled with science that he cannot but observe all of nature around him—and within him—as broken into smaller in smaller and smaller “realities.” He can never see the landscape in the same holistic way as our pre-Western-science ancestors or our contemporaries immersed non-Western ways of knowing can. Of course, our ancestors and not-wholly-Western-influenced contemporaries, in turn, had/has a world view “tainted” by the various “realities of their own life practices.

If I could restate the Alzheimer’s World Summit’s overall goal (as I see it) in terms of the above, it would be to awaken the ability of those of us steeped in Western forms of knowledge “to see beyond the categories assumed by our philosophies, sciences, habits of mass production and subject/object based language systems.” So whether you, like me, may still have strong skepticism about healing modes outside of mainstream/conventional Western medicine or whether you have already already seen the light, I’m again giving the signup information for the Alzheimer’s World Summit and following that, the agenda of speakers for the second day of the Summit. 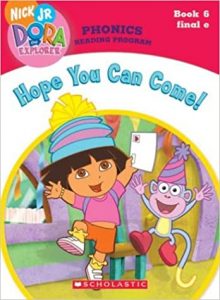 HOW: Sign up for a FREE PASS that entitles you to watch the entire Summit.

Note that as soon as you get to the Summit webpage, click on GET MY FREE PASS to register. Once you have registered, you will receive an e-mail with your member password. Go to the Member Login on the menu bar at the top of the page and click on it. Use your password to access the Member Area, where you must create your own log in. After logging in, you will be able to see the Summit Agenda in the green bar at the top: you will then be able to see all the speakers for each day of the Summit and start planning which sessions you’d like to watch. Below, I present the speakers of DAY 2.

WHEN: The Summit stretches over 5 days (Wednesday 20th-Sunday 24th)

AGENDA: Your FREE PASS gives you access to every participant’s speaking time so that you can watch some or all of the 30 presentations. 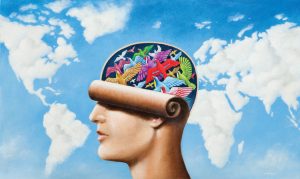 Rafal Oblinski. Can’t find the title of this work. Like the previous Oblinsky image, it subverts our notion of the brain we expect to see in a “real” open skull. Rather than the large-grapefruit-size pinkish-gray walnut, we see a space filled with birds on the verge of fluttering into the world as mapped by modern cartographers using surveillance craft and satellite imagery. At the same time, the map clouds seem to be on the verge of already breaking up under the influence of yet newer technologies—or is Oblinsky foreseeing the fragility of the continents under the threat of climate change?

Summit Overview: The Biology, Biochemistry, and anatomy of Alzheimer’s Disease The Immune System, The Brain and Prevention of Alzheimer’s

Colon to The Cosmos and Alzheimer’s Prevention The Lymphatic System and How it Affects Our Mind and Body GMO’s, The Gut and Prevention of Alzheimer’s Biological Dentistry and Prevention of Alzheimer’s Taking care of us “dementers”: Day 3 of the Alzheimer’s World Summit is all about the people who help make our lives livable and joyful

Gerda speaks at the “Alzheimer’s World Summit,” Oct 20-24. Do join me for the FREE online event!