It seems that the traditional crafts—knitting, crotchet, sewing, scrapbooking, cross-stitch—have undergone a revival in the US since the start of the Corona virus pandemic. In Utah, the craft stores were designated “essential businesses” and remained open even during the lockdown. I had been a stranger to craft stores since giving up knitting about six years ago, after failing to comprehend and follow the pattern of a sweater for my then two-year-old grandson, Dante (now 8). Two years ago, though, I tried knitting again after my sister-in-law, Sandy Repsher, suffered a stroke and decided to use knitting as a therapy to regain functionality in her left hand. She had found a pattern of an elegant 1930s sweater, which consists mostly of garter stitch, the simplest knitting mode there is. Each of us acquired our preferred yarn, and we started the project together. More than a year—and a knitting class at the Columbus Community Center later—I finally finished mine during the first weeks of Covid seclusion: instead of a sweater, I produced a long scarf pocked with mistakes, but still usable. 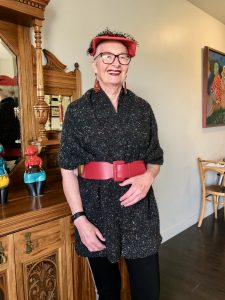 My thirties wanna-be sweater with a vintage thirties hat

When my sweater-turned scarf was done, I was left with no nerve-calming activity to practice during our ongoing seclusion. I therefore took my life into my hands and braved a nearby craft store (they let in only a few customers at a time, required masks, and practiced social distancing), where I bought yarn for a knee-blanket—in garter stich. Given my dubious progress, that should keep me busy until I die! 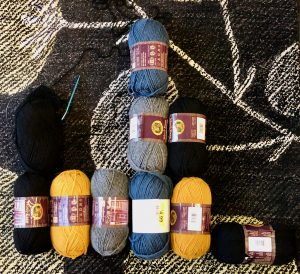 My blanket will be colorful…

I was apparently not the only one embracing the crafts during my seclusion: knitted, crotcheted, or sewn artifacts with a stamp of Covid-19 popped up all over the Internet. 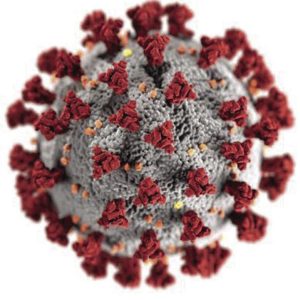 Long before Covid, knitting had become a way of life for Icelandic knitwear designer Ýrúrarí Jóhannsdóttir. Before the virus, she had mainly focused on clothing, which included chunky knit sweaters dotted with 3D tongues, or sleeves embellished with faux mouths and teeth. As the featured photo at the beginning of this post and the one below shows, though, she began to translate her love of tongues into face masks when the pandemic reached Iceland. 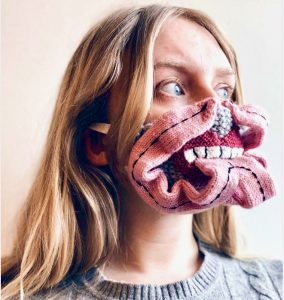 Another Ýrúrarí Jóhannsdóttir face mask features an enormous split tongue. The designer views her coolly grotesque tongue masks solely as art projects—more sculpture than clothing—rather than as objects to prevent the spread of infection. She intends her masks to evoke a laugh, thereby promoting the idea that covering one’s face can be fun—and funny. “The masks have been used for creating awareness,” she says.

Earlier this week, my life-long South African friend Elza Koen posted an art installation by American multi-media artist Ben Cuevas on Facebook. Despite preceding the Covid era by a decade, the piece strongly evoked our strange new times for me. Transcending the Material incorporates a knitted skeleton (below). During the making of it, the artist reflected on some of the same things that have occupied my mind—and probably yours—during this time of seclusion and social distancing: “the condition of embodiment, exploring what it means to have a body, to inhabit a body, to be a body incarnated in, and interacting with this world.” 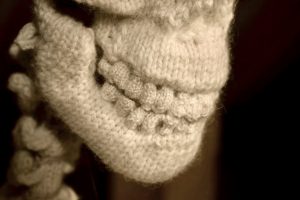 One cannot help but rethink your body while being unable to hug friends and cuddle with children or grandchildren. What are our bodies without touch? The virus has robbed us of the formerly ordinary comfort of being physically close to other human beings. The loss that those of us with partners or lovers or housemates experience, however, pales against that of people living alone. Not to mention people who die in the hospital without those they love in attendance. The grace of the universe shines through the nurses and doctors and other medical people who fill the places of the absent loved ones at a death bed. 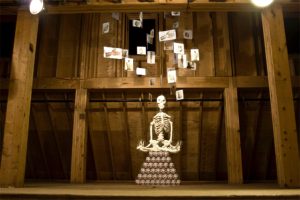 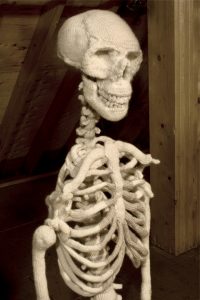 “Ben Cuevas’s installation features a knitted skeleton seated atop a pyramid of Borden’s condensed milk cans and a cloud of screen prints on Plexi glass suspended above it. The prints are of disembodied anatomical parts. The skeleton is seated in the lotus position—Ben conceives of the piece as a meditation on transcendence; he also sees it as a reference to material culture and the local history of the hamlet Wassaic in New York State, where he was in residence at an arts collective program while making the piece. The condensed milk cans refer to the Borden Company, which used to have a condensed milk factory there.” Bora Mici, Artists Speak.

For me, Cuevas’s skeleton brought to mind Doña Quixote, as I call my demented alter ego, who had for years been a physical presence on our back stoep in the form of a Halloween skeleton Peter had found and I had dressed up. 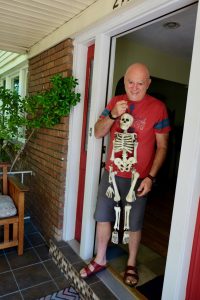 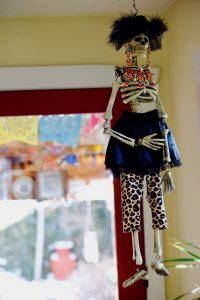 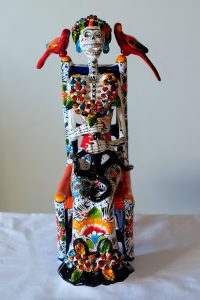 Despite the fact that we symbolically threw out Doña Quixote’s physical representation when we moved into our apartment, she has of course followed us here, stowed away in my addled head. We had not intended to replace her with a new material form, but we could not help ourselves when we saw the Frida Kahlo figure (above) in a Mexican market while in San Antonio to do a presentation on my dementia. As far as the Doña’s ghostly-self-in-my-head goes, Peter helps me manage the confusion and anxiety that follows in her growing wake. That means he and I have been spending more and more time together even before the seclusion began. Despite our constant—and sometimes annoying—togetherness, we still pause every day to tell each other how lucky we are to have him or her. After dinner, we watch a movie or other video together and hold hands. And, of course, cuddle up in bed together at night. I am so grateful to have a such a close companion in my sorely diminished social world. 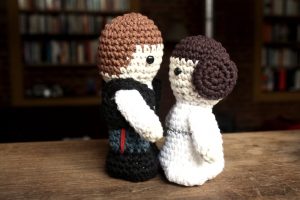 I do miss holding my kids and grandkids, though we do now and then see them outside and at a distance. I also miss breakfast or lunch with my friends. My and Peter’s world has shrunk to the size of our apartment, except for getting food and running other errands and outside walks when it isn’t too hot. Like, I imagine, so many of you who spend your days not working—and those fortunate enough to be able to work from home—Peter and I have each become even more dependent on our phones (he) and computers (both) for what outside social contact we have. 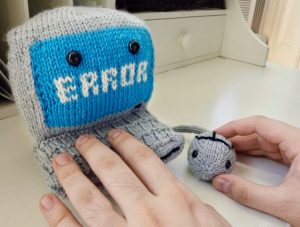 Increased dependence on my computer had started happening for me years ago, after I could no longer drive as a result of my confusion about my locality in space. For some years, I used the bus. After mistakenly getting off twenty blocks too soon on a 19-degree Farenheit evening in the middle of winter with the next bus only due an hour later, I started avoiding the bus and adopted Über. For the last year or so, though, I have lost the courage to ride Über because of my difficulty in using the app. Peter takes me everywhere I want to go, but I try not to call on him too frequently. Accordingly, I had become much more homebound before the virus even appeared on the horizon. 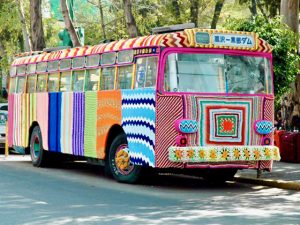 A rather extreme knitting project…

Given my shrunken social self, more and more of my interactions with the larger world have been through e-mail, my website, and Facebook over the last years. Accordingly, Peter and I thought it fitting to use a few weeks of our time hiding from the virus to revamp my little corner of the Internet: like our bodies over a lifetime, this my website, too, had acquired creaky body parts, started suffering from broken links, and needed a facelift. Besides, Peter and have always enjoyed doing joint projects—although we fight a lot!—plus it would be a good source of new things to talk about now that we don’t have many outside experiences and news of the people in our world has become so lean. Also, sitting next to Peter at the computer for hours was very comforting for me. Although we planned the fixes together, Peter was the one who worked for many hours on simplifying what you see on the page and fixing everything under the hood. He also added a “Search” feature. 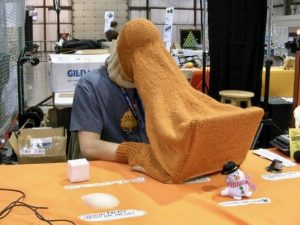 Peter is so focused when he works on his computer that he did not need electronics guru Becky Stern’s “knitted head sock for laptop privacy,” a satirical commentary on “how attached and concentrated on technology we are and to highlight the lack of movement that happens when we’re engrossed in our laptops, keyboards, PDAs, etc.”

I kicked in on our website work with the retooling of some titles and the dreaming up of different categories for organizing the blog posts. You can see the categories on the top right of the page: they organize existing posts into topics with similar content, making a search for specific information easier (we hope!). There are also some new categories, for example, “End-of-life plans” and “Questions people ask me.” For the latter, I intend to write more posts answering the dementia questions I get from people I come across in my daily life or meet in the cloud. 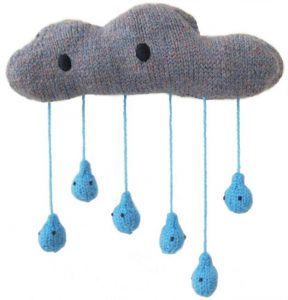 Today, “we”—as long as you take the first-person plural pronoun as heavily weighted toward Peter—present our joint effort. Our hope is that you mostly won’t notice the difference, but rather just feel that the website is easier to use. 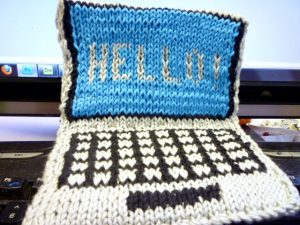 Thanks to all of you for supporting me and my family through our dementia journey “before,” “during,” and, soon—I hope—“after” the Covid era, until all I can do is play with an Alheimer’s/dementia “fidget lap blanket” I hope someone will eventually craft for me… 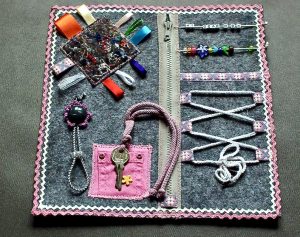 “Black Lives Matter,” shout I, who grew up white in South Africa, a perpetrator, beneficiary, and eyewitness of Apartheid While hazarding the hospital for a non-Covid emergency, Doña Quixote revisits her end-of-life decisions