Despite our ongoing ménage à trois with Doña Quixote, aka my dementia, Peter and Gerda celebrate our 46th wedding anniversary

On Sunday March 26th, the Salt Lake City Saunderses celebrated 2 birthdays and a wedding anniversary. Sunday was the actual day of Marissa’s birthday: my baby girl turned 40! Today, March 28th, is her husband Adam’s 43rd birthday. In between–that is, yesterday, came my and Peter’s anniversary. 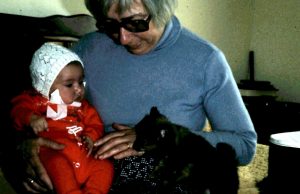 It is thanks to the addition of Adam to our family that we finally celebrated our wedding anniversary. Philosophically, we believe that a celebration related to one’s marriage should not be relegated to a single day per year—instead, we strive to remember our fortune of being married to each other every single day. While I do not claim that we actually achieve a daily celebration, we celebrate each other often enough that we have never felt the necessity of pulling out all stops on the actual calendar day. Practically, we hardly ever even remembered our wedding anniversary after Marissa was born and while she was still living in our household—the efforts we had put into her birthday, especially in South Africa where birthdays are occasions for the getting-together of the whole extended family, used to exhaust us so much that the thought of another celebration (with the chore of finding a babysitter included) never even entered our minds.

Some of the people who would show up if we celebrated a Saunders birthday in South Africa. Gerda’s siblings, spouses, and some of their offspring. Christmas, 2004. Gerda’s mother, Susan, is the white-haired woman in the back row. She has since died. Though not invited, the Doña shows up too these days.

Nowadays, though, with our anniversary sandwiched between Marissa’s and Adam’s, it gets quite a bit of reflected shine, given that we now declare all three events as the focus of one big party. Since our whole nuclear (though much expanded) family was here, Peter and I gave everyone a Doña Quixote update by telling them about two of her tricks the day before: 1, When we came out of Costco the day before, the Doña was pushing the laden cart. Upon seeing the cart park right at the start of the parking lot, she dutifully stowed our cart between the railings. Only problem—we hadn’t yet reached our car or unloaded the cart. 2, We went to Seven-Eleven to get gas. Two pumps in a row were open. Peter drove through the first one (in the shade) to the second one( in the sun). He asked if I’d rather be in the shade and I said yes. He started pulling back. No, I said, why don’t you just move right up to the building because those spots have shade. Only problem—there are no pumps right by the building. Everyone laughed at me, but I took it as them laughing at Doña Quixote. I asked them to always keep laughing at her, because in that way they are acknowledging that there was a part of me that was still not altogether the same as her. Or, I said, they could cry. Just please don’t sit serious-faced and pretend nothing happened. That would really be a death blow.

Between the leg-of-lamb dinner and dessert, we played outside and took family photos.

As for me and my family, we believe in evolution… Aliya (6) and Dante(4) on the ropes, Newton(37) is the spotter. From left to right: Adam, Dante, Newton up the tree, Kanye, Cheryl, Aliya. Kanye on the horse swing that Peter and I made out of a non-steel radial tire—a project that nearly cost us our marriage…

Yesterday, on the day of our anniversary, Kanye sent us an e-mail with congratulations. Here is Peter’s response:

Thank you for the note. We have been married for 46 years today!  We have enjoyed being together for so long and were lucky to have a great son called Newton who married a lovely woman called Cheryl who then had two perfect children named Kanye and Aliya.

One day you will fall in love with a lovely girl and also have a wonderful time with her for many, many years.

And here is mine.

“Thanks for thinking of us and for your lovely note, Kanye. I agree with Oupa that we are very lucky to have had a happy marriage for so long. I think a happy marriage is the result of both luck and hard work: we are lucky because we turned out to have the same priorities at important points in our lives, like we both wanted to have babies and we both wanted to work hard to get them the best education we could; also, we both wanted each other to be happy, so sometimes we had to work out differences we had—sometimes Oupa gave up something he wanted and sometimes I gave up something I wanted, because our biggest priority was to keep on being together.”

Me and you and you and me
No matter how they toss the dice, it had to be
The only one for me is you, and you for me
So happy together