Gerda on BYU Radio: an interview with the marvelous Julie Rose of the show Top of Mind

You can listen to the podcast here.

Last week Peter and I drove to Provo for my interview with Julie Rose, who runs the show Top of Mind on BYU Radio. Before reporting to the studio, we hung around outside the building watching the passing show. One thing I have to say about the students that we came across is that they were universally friendly and polite. Everyone greeted us with a friendly smile, sometimes even a greeting.

Peter said the campus reminded him of his trip back to his high school in South Africa, the Harry Potter-reminiscent Pretoria Boys High School (video), for his brother Cliff’s 50th anniversary: every boy you encounter on campus looks up from his conversation or hurried pace to greet every visitor with a hand gesture and “Morning, Sir.” 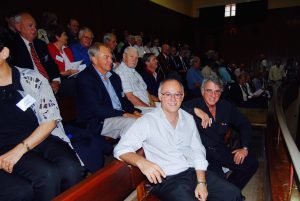 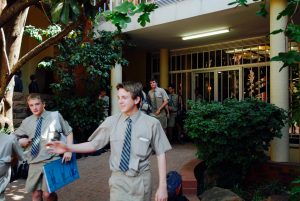 Below, left: A piper starts the ceremony. Right: Boys serving tea to the guests. 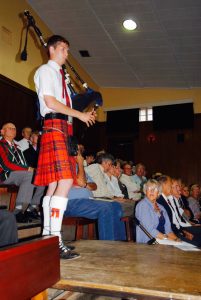 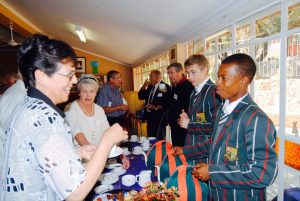 In the lobby of the broadcasting building at BYU, Peter and I aligned ourselves according to BUY’s prescribed gender roles as suggested by an unnamed cheerleader and sports stars neither of us recognized. (Our bad) 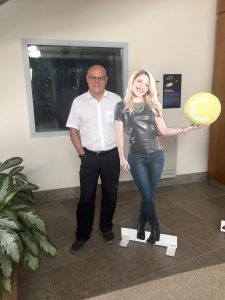 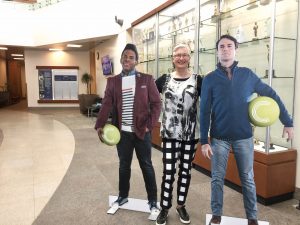 Then on to the studio, and the amazing Julie Rose, a seasoned broadcast journalist and interviewer, who has produced spots and feature news stories for NPR’s Morning Edition and All Things Considered over the course of her career in both Utah and North Carolina. She’s a recipient of two National Edward R. Murrow Awards for Radio Writing and also the winner of multiple regional Edward R. Murrow Awards for continuing coverage, hard news reporting, writing, use of sound, features and other categories. Her show, Top of Mind, is billed as “smart, informative conversations and interviews that go beyond mere headlines and sound bites.” The shows I listened to ahead of time certainly deserved the description. In real life, Julie was an excellent interviewer, and I spent a happy hour responding to her thoughtful questions. What made our conversation even more special, was that Julie’s father lived with a brain injury for many years, and she could really relate to the effect such damage has on one’s daily life, even as the extent of the loss is not easily visible to people outside the household. You can listen to the podcast here. 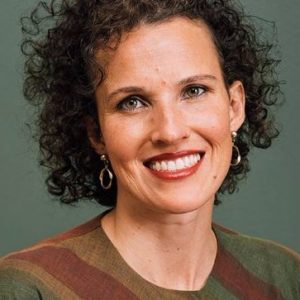 Thanks so much, Julie Rose, for a fabulous conversation.

Thanks, also, to the show’s producer, Tennery Norton for your kindness and hospitality.

Support America’s small businesses: my grandson Kanye’s lemonade stand is open Saturday June 1, 2017,11 am-1 pm Doña Quixote wants to know: who am I making these memories for?